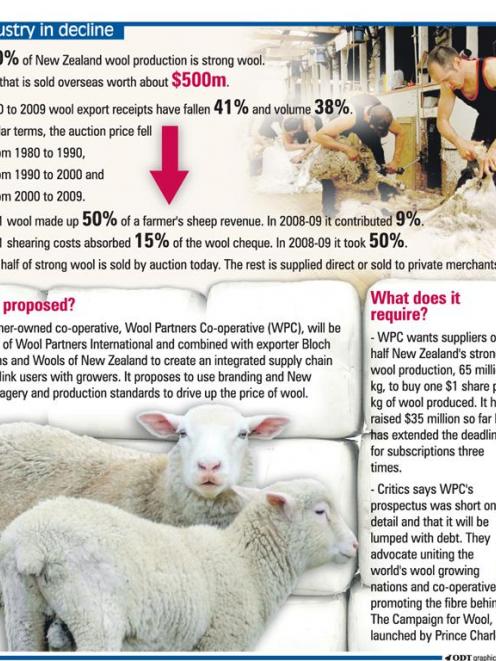 An industry in decline. ODT graphic.
Once again, debate over the structure of a key farm export is ripping the sheep industry apart, yet the perilous start of the wool industry appears insufficient to unite farmers and drive change to a sector that is in decline. Agribusiness editor Neal Wallace asks why.

Is this as good as it gets? That ultimately has to be the question strong wool sheep farmers ask themselves as they dissect the facts from the dross and propaganda that has marred the bitter debate about changing the way the sector operates.

The solution promoted by farming groups, but viciously opposed by wool exporters and merchants, is the creation of a farmer-owned wool marketing co-operative, Wool Partners Co-operative (WPC), a business that will use scale and new sales methods linked to New Zealand's clean and green reputation to reverse 20 years of falling wool prices and volume.

It is based on a tried and proven model, the New Zealand Merino Company, but it also challenges the industry, which has fought back accordingly.

The fact remains the industry's record in growing returns, developing markets, new products and international profile for strong wool in the past 15 years has been woeful, evident by falling prices, supply and eroded market share.

There is nothing to suggest that without changing wool's business model, growers will not get anything more than a continuation of the same.

Some companies have developed new products, offered contracts and launched branded products, such as Elders Primary Wool's Just Shorn and New Zealand Wool Services Purelana, but it is small scale and not of sufficient size to make substantive change and stop industry erosion.

WPC is seeking to market half the strong wool clip, equivalent to 65 million kg, and is asking growers to buy a $1 share for each kg they produce.

Despite critics of WPC labelling the $35 million it has raised so far as a failure, it compares favourably with the $22 million raised in recent years by Silver Fern Farms, and $61 million by Fonterra, and suggests a significant number of farmers want change.

However, WPC did not help its cause by launching a prospectus last year that was short on detail.

It was too rigid, requiring a binding target and supply commitment from suppliers of half the country's strong wool clip for the company to proceed.

That deadline has now been extended three times, bringing the proposal's future into question.

The level of support for WPC is a clear signal that many farmers expect the wool industry to do a better job at marketing and adding value to the clip and provide a product users want, rather than operating a disposal process, as some have labelled the current system.

Prices certainly have rebounded to levels last seen in the late 1980s, but the size of the recovery was off an exceptionally low base and due to a global wool shortage.

WPC's desire to consolidate the clip, use brands and link growers with users is a system supported in reports by McKinsey, the Wool Industry Network, Wool Taskforce and KPMG.

But, like the meat industry, bitter competition and open animosity between the various players - especially exporters - towards a competing grower-owned company, makes such aggregation difficult to achieve, hence WPC's need to attract farmer investment and supply.

More than half the strong wool clip is sold privately by farmers to merchants or directly to users, with the balance sold by auction, so WPC has to attract supply and investment off competitors.

Once wool leaves their shed, farmers have little idea where it ends up.

In contrast, New Zealand Merino has those values at its core, with guarantees on its ethical and sustainable production and the ability to trace wool back to the farm.

It proudly links merino wool to farmers and the environment.

Strong wool farmer reluctance to sign cheques in part reflects tight cash flows, but also frustration at the recent performance of wool, which 20 years ago contributed half the revenue earned from sheep, but is now down to about 10%.

An average farmer will have to invest about $15,000 in WPC and payment schedules over several years have been provided to ease the burden.

There is also a reluctance by some to invest further in the wool industry, which has traditionally had an insatiable appetite for cash, and some fear WPC could be another cash soak-hole.

Farmers are also wary some of the underperformers who have led the wool industry in the past will be re-employed by WPC, resulting in more of the same.

But that still leaves unanswered the central question: how do farmers break this spiral of decline?

The New Zealand Council of Wool Exporters and other critics of WPC support Prince Charles' backing of the Campaign for Wool, which will unite all wool growers in a global promotion.

But that will do nothing to differentiate New Zealand wool attributes and should there be a wool equivalent of China's melamine milk scandal, such generic advertising risks including New Zealand wool by association in a scandal not of its doing.

Such a programme also fails to fully use New Zealand's greatest marketing asset: wool as a natural, healthy product which is sustainably and ethically produced, something not all countries can claim.

The reality is exporters and merchants have done little to advance wool in the past 15 years, due in part to the industry being in survival mode, but that is not to say they have not taken risks within their business during difficult times.

But the industry has contracted and wool's presence on the world's stage has diminished to the point where a generation of consumers do not know the merits of wool.

Perhaps opportunistically, wool exporters executive manager Nick Nicholson last month announced his organisation had listened to wool growers and was "looking at ways to launch a service direct to farmers that will give them feedback on where their wool is going, what products it is being made in to and how they can achieve premiums for their clip".

Growers should be excused for asking why this initiative is only being launched now. The WPC debate is not new.

New Zealand Merino weathered similar opposition and is now a profitable company that has helped transform the merino wool industry to the point where the fibre has cornered the active outdoor clothing market.

It required merino farmers to realise the status quo was not a viable option, that their product deserved to be promoted on its attributes and that they needed to share in the added value but, above all, that growers needed to invest in their future.

Many believe this is the last opportunity for the strong wool industry to regain its place as the premium carpet and interior textile fibre.

Farmers ultimately will make that decision.