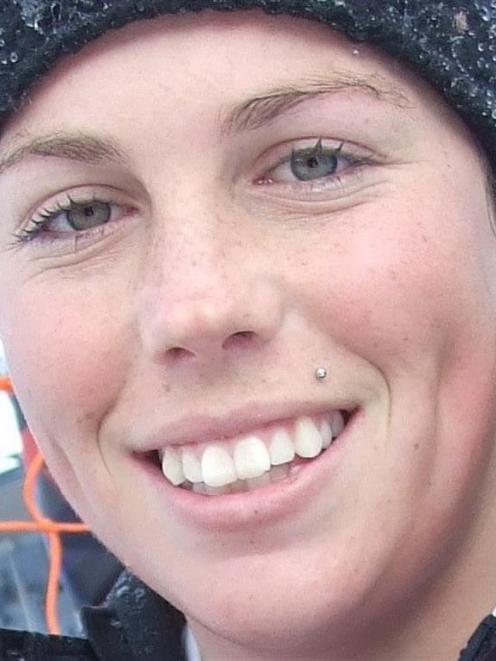 Brooke Solly and dog Tama compete in the Dog Derby during the Queenstown Winter Festival in 2013. Photo by Christina McDonald.
Brooke Solly had been meaning to join the Maniototo Young Farmers Club.

The young shepherd had every intention of heading along to a meeting but she got busy, breaking in a horse, and never quite made it.

Then on April 2 this year her life changed, potentially forever, when she rolled her vehicle and suffered serious injuries, including spinal damage.

"I got through 22 years of not breaking any bones and then decided to do a hell of a job of it,'' she said dryly.

Speaking from Burwood Hospital, Miss Solly said she had been overwhelmed by the support she had received since the accident.

That included the Maniototo Young Farmers Club, which is running a winter feed competition and giving the proceeds to the hospice, local junior sports teams and to help Miss Solly, who had lived in the district for six months.

"I really appreciate everything they are doing. It took me by surprise ... I'll definitely have to go down and shout some beers, I think, one day,'' she said.

But dairying was not her passion and, after leaving school, she spent a year studying agriculture at Telford in South Otago, before going shepherding.

Building up a team of five working dogs, she had stints on stations in Southland, the Mackenzie and then the Maniototo.

Miss Solly has no recollection of the crash that landed her in hospital.

But she knew she was tired and was not wearing a seatbelt.

She was doing "really well'' at Burwood and was regaining movement in one of her legs.

It was too early to say whether she would walk again.

While the movement was exciting, she tried to keep a level head and "not get too excited'' in case of disappointment later.

Having good upper-body strength, due to the physical nature of farming, had helped with her rehabilitation, she said.

It was the "incredible'' amount of support that kept her going.

Her mother moved to Christchurch while she was in hospital and it was hard on her two younger sisters, aged 6 and 9, not having her there to support them.

But they were doing well and Miss Solly was also looking forward to another sister having a baby at the end of July.

Having things to look forward to helped her maintain a positive attitude, she said.

A possible discharge at the end of August had been signalled, but that could change.

She said she had met some "awesome'' people at Burwood.

"The nurses and doctors and other patients are all wicked people,'' she said.

Her focus was solely on recovery and she was not yet sure if she would return to the farming sector.

Maniototo Young Farmers Club chairwoman Brooke Elliot said the club wanted "to make sure she knows we're all thinking of her and to help her family''.

Entries were being sought for the winter feed competition with the boundaries being extended this year through to Omakau and Middlemarch.

Entries close on May 27 and entry forms were available at PGG Wrightson, Farmlands, Vet Ent and the Veterinary Centre or by contacting Miss Elliot.

While acknowledging it had been a poor season, Miss Elliot said everyone was in the same situation, as she urged farmers to enter.

It was a small club, with about 12 members, and they put their "heart and soul'' into organising the competition.

A dinner, auction and prize-giving was being held at the Maniototo Stadium in Ranfurly on June 18, with guest speaker Cameron Leslie, a paralympics swimmer who won gold at the 2008 Summer Paralympics.

Tables were being sold for the event which would include a live band.

In the past, St John, Friends of the Hospital and the Otago Regional Rescue Helicopter have been recipients of the proceeds.

More than 110 entries were received from throughout North Otago, with more than 240 people attending the prizegiving and auction night at the Waitaki Recreation Centre.

The overall winner, with a wetland crop of Sovereign kale, was Mark Elliott.