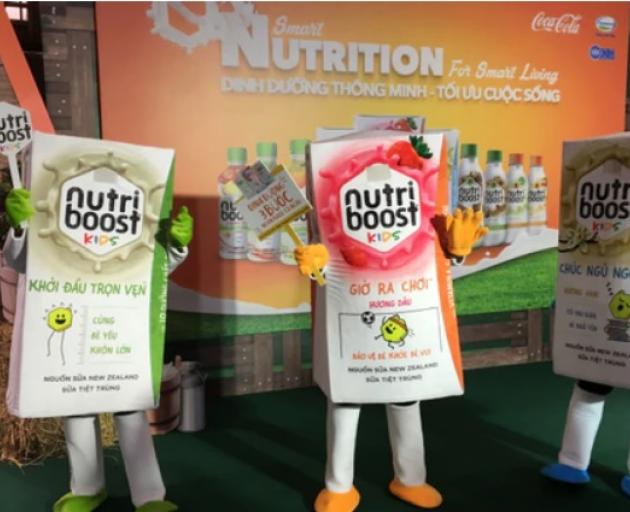 Coca Cola's Nutriboost beverage, which it makes with Fonterra, was rolled out in Vietnam last week. Photo: Supplied.
Fonterra and Coca-Cola have formed an alliance to launch-ready-to drink beverages in Southeast Asia, starting with Vietnam.

The move comes as Fonterra moves towards joint ventures that do not involve the co-op injecting capital and as Coca-Cola looks to diversify away from drinks with a high sugar content.

Singapore-based Clare Morgan, marketing director for the Asean Fonterra & Coca-Cola Strategic Alliance, said the alliance launched a product in Vietnam last week, and would look to introduce other products in Indonesia and Thailand over time.

"We have amazing dairy know-how and they have got amazing distribution," Morgan told the Herald.

The range would include products designed for children, breakfast drinks for adults, and a skincare range.

"It's a very different way for us to do business," she said.

The alliance has five members - three from Fonterra and two from Coca-Cola.

"We have come up with all the formulations using third parties to produce the product.

"It's our milk powder and our intellectual property going into the recipe, but launched under a Coca Cola brand 'Nutriboost'."

Morgan said the alliance was exploratory but could progress to becoming a fully fledged joint venture over time.

"It's exploratory but there is a big commitment from both sides to get this thing done," she said.

"A lot of their market is looking at sugar taxes, so getting a range of dairy products into these markets is very important for them," she said.

"They are amazing at distribution."

Coca-Cola generates two thirds of its revenue from outside North America.

At its first quarter result in February, chief executive James Quincey said the company was was transforming as a "consumer-centric, total beverage company".