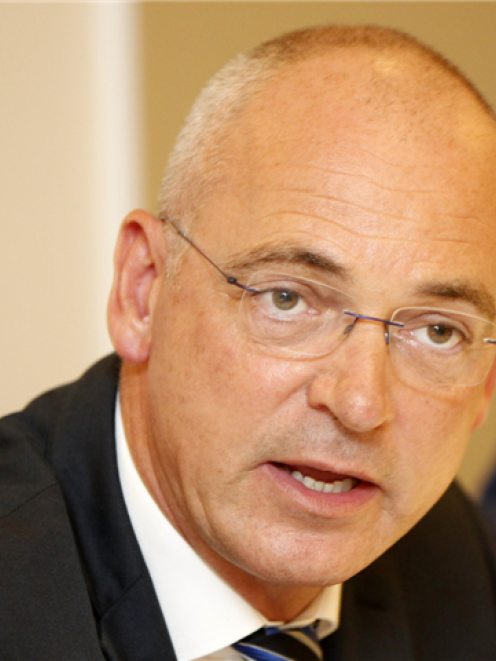 Theo Spierings
Opposition parties have hit out at Fonterra chief executive Theo Spierings' salary after it was revealed he is the country's second-highest-paid executive, earning $4.18 million.

He was also the second-highest-paid New Zealand executive in 2013.

The figures were revealed in the Business Herald's executive pay survey this morning, and come after Mr Spierings was given a pay rise of $660,000 in 2014.

Fonterra last week announced a review of its head office structure as the business comes under pressure from falling global dairy prices.

Federated Farmers dairy industry group chairman Andrew Hoggard said Spierings' salary was probably appropriate for a chief executive running a company the size of Fonterra, but he wanted to know how much of Spierings' pay was the base salary and how much was based on an at risk component based on key performance indicators.

"The big question I've got is, 'how [is] the performance is actually measured'," he said.

"In both seasons we've seen very little dividend growth, I would assume his performance would be based around the dividend and the performance of Fonterra in terms of its dividend because obviously there's not a huge degree he can do to impact on global milk prices.

"Often when you hear about these big salaries, we've got to remember, Fonterra's a bloody big company and you don't just pay somebody $100k to run a company like that, you've got to meet the market."

Labour finance spokesman Grant Robertson said the salaries of the bosses of New Zealand's biggest companies, which rose by an average of 10 per cent last year while the average worker received only on average a 3 per cent increase, compromised the Kiwi notion of a fair go.

"No one begrudges people who do difficult, complex and time consuming jobs being paid a decent salary, but salaries and salary increases for chief executives have now reached absurd levels," he said.

"CEO salary levels are becoming obscene, especially when so many front-line workers are working hard, but are really doing it tough. We saw that last week, with Fonterra announcing hundreds of lay-offs, but the CEO got a $660,000 pay increase last year," Mr Robertson said.

Spierings told media last Wednesday the company was in the middle of a major review, which began in December, to restructure the company's management team.

He said a major review underway of the business would lead to hundreds of its 1500 head office and support function staff being laid off because it wanted to redirect more staff into sales and in market roles to help drive up returns. Fonterra currently employs 11,500 staff in New Zealand and 18,000 worldwide.

Mr Spierings wouldn't confirm the number of layoffs until a final review is completed and approved by the board, due on August 1.

"Dairy farmers doing it tough with the low global milk price and Fonterra workers, whose jobs are facing the chop, will be looking at the Fonterra CEO's $4.18 million pay packet, a $660,000 rise in just one year, and shaking their heads in disbelief," she said.

Fonterra has slashed its farmgate milk price to $4.40 per kilogram of milk solids for the 2014/15 season and has an opening forecast of $5.25/kgMS for next season while Dairy NZ has forecast farmers need $5.70/kgMS to break even.

Spierings has said on-going volatility in the market means there could be a $1.50/kgMS swing either way to the 2015/16 forecast but he's confident demand will come back in the market at some point, given global milk inventories are relatively low.

When Fonterra was set up in 2001 it was owned by 11,000 dairy farmers and supplied 96 per cent of the country's milk. With the rapid expansion of smaller export-orientated dairy firms, Fonterra's market share has declined to 87 per cent of the growing milk pool and it is expanding at a slower pace than its smaller competitors.

There has been anecdotal talk of some of Fonterra's 10,500 suppliers voting with their feet to join other dairy processors offering payouts above its payout rate or not requiring suppliers to pay for shares based on production levels that they will struggle to afford.

Mr Spierings said while some have indicated they will leave the cooperative in the following season, most of those are in regions where other processors have built plants. He says the MyMilk brand, where farmers can join as suppliers without having to buy shares immediately, has won at least 20 suppliers back for the next season and overall supplier numbers have stayed stable.