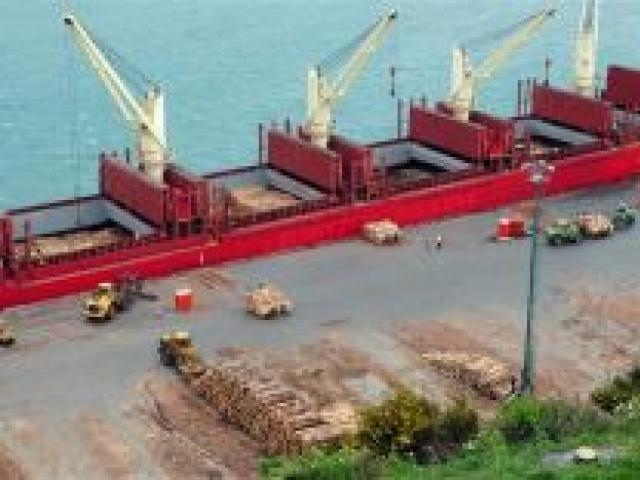 Logs destined for China are loaded on to East Ambition at Port Chalmers yesterday. Photo by Craig Baxter.
Soaring log prices have given forestry exporters a badly needed boost after several years of low prices and narrow margins.

Demand from China has pushed up the price of export logs by 25% in the past six months and the view among the industry was that higher prices could continue until at least Christmas.

Wenita Forest Products chief executive Rodger Hancock said while demand was strong and prices were improving, margins and profits were still being squeezed by an export-unfriendly exchange rate and rising shipping costs.

"Together they are conspiring to keep a lid on margins and profits."

Spot shipping prices to China and Korea recently rose above $57 a cubic metre for the first time since November 2008, due in part to reduced imports of bulk goods coming to New Zealand, meaning inbound vessels could not keep up with export demand.

Mr Hancock said demand was being driven by China's construction industry, but also from higher value furniture and cabinet making.

The higher prices were starting to flow through to other major log markets such as Korea.

Mr Hancock said lumber prices had also lifted, but most southern exports went to the United States, where the economy was slow to come out of recession.

Wenita harvesting crews were operating at full capacity and Mr Hancock said national log export volumes for the 2009 calendar year were likely to be at record levels.

"I certainly wouldn't say we're wondering what to do with all the excess money, but it has got to the point where all our basic costs are being covered again," he said.

City Forest harvest crews were also working to capacity and Mr Dodson said the company had decided to keep them employed even during quiet times, so they were ready when prices improved.

He agreed with Mr Hancock that the Korean market had also started to pick up, but added that the traditional market for southern South Island logs was only rebuilding low inventory levels.

Mr Dodson expected log prices to stay high for the next six months, but added that a New Zealand-US exchange rate at US65c would certainly help exporters.