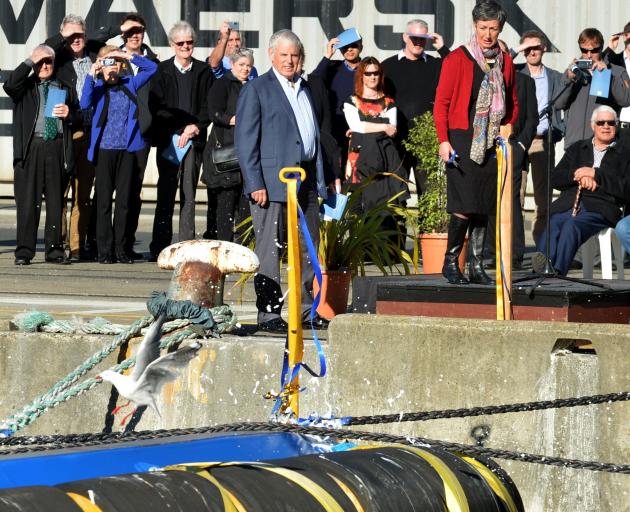 David Faulkner and Jo Plunket cut the ribbon during the launch of Port of Otago tug Taiaroa at Port Chalmers in 2014. Photo: Peter McIntosh
David Faulkner recently retired as chairman of Port Otago. He talks to business editor Sally Rae about some of the highlights of his tenure.

David Faulkner will always have an interest in shipping comings and goings at Port Otago — but it will now be from the sideline.

Mr Faulkner retired as chairman last month, ending a tenure that began a decade earlier when he was appointed a director of the Otago Regional Council-owned company. 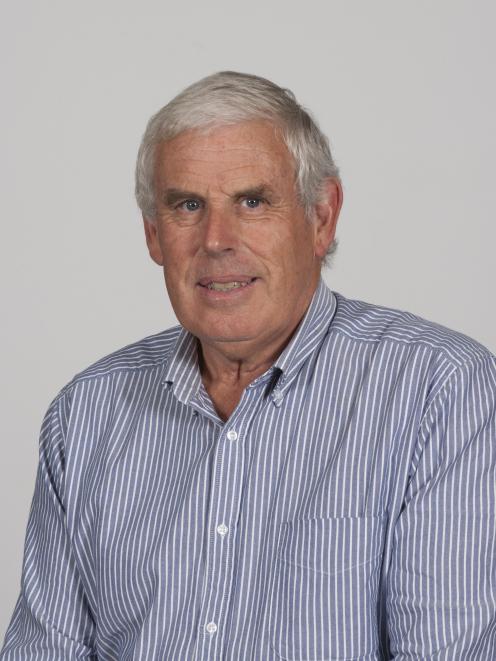 Reflecting on his tenure, Mr Faulkner said joining the Port Otago board coincided with his retirement from full-time work as managing director of Fulton Hogan, allowing him the ‘‘luxury’’ of being able to decide which things he wanted to do.

Given his background, infrastructure was a ‘‘great attraction’’ for Mr Faulkner who lives on a lifestyle property near Motueka, surrounded by properties where hops and apples are grown.

Born and raised in Dunedin, he moved to Wellington in 1959 where he completed a science degree at Victoria University, and later gained a civil engineering degree from the University of Canterbury.

He joined Fulton Hogan in 1986 and was appointed managing director in 2001.

Following his retirement in 2009 he was appointed a non-executive director of the company. He enjoyed his time with Fulton Hogan, saying he was very proud of its success.

In late 2009, he was appointed a director of Port Otago. His arrival coincided with a proposed merger with rival Lyttelton Port which occupied ‘‘everyone’s minds’’ for those first few months, until it was shelved.

The following year, he took over as chairman from John Gilks, in an appointment that he described as ‘‘a bit of a surprise’’.

At that time, Port Otago was just starting out on its Next Generation programme which was about upgrading the port’s efficiency and productivity for its next generation of users. It included channel deepening, expansion of warehouse facilities, wharfside deepening and a wharf extension.

Channel deepening was ‘‘an interesting one’’, which he likened to an airport extension as it was a very hard thing to justify in economic terms. It was a catch-22 — if you did not do it, then the bigger ships would not come and, if you did it, then they ‘‘might come’’, so there was a fair bit of risk involved, but the call had to be made, he said.

He was pleased to see the programme completed, which had set up Port Otago for the next two generations, and it was quite fitting that the end of his tenure coincided with the opening of the new $1million fishing jetty at Boiler Point last month.

While some might have questioned the company’s purchase of more dredging equipment, it meant that it was able to do the work ‘‘quite cheaply’’ compared with other ports, using its dredge New Era, rather than the very expensive cost of hiring an overseas company to do it.

Much effort had gone into improving the port’s relationship with its neighbours and things like real-time noise monitoring had made a huge improvement.

‘‘Very good strides’’ were being made in that relationship until an issue arose earlier this year when residents in the area complained about the noise coming from the Rio-class ships.

Mr Faulkner praised Port Otago chief executive Kevin Winders for seeking a solution for the issue which has seen the ships getting fitted with a silencer.

The initiative had made a ‘‘huge difference’’ to the noise problem.

It had been a ‘‘real feather in the cap’’ for the port as it would have been very easy to say ‘‘that’s not our problem’’, but Mr Winders had very much taken the noise concerns on board, he said.

Safety was a ‘‘never ending journey’’— but a journey Port Otago had made good progress on with commitment and improvement in safety culture and performance, especially in straddle stability management following a straddle tip-over about four years ago.

About 18 months ago, the entire site was declared smoke-free which, from a health point of view, was one of the best things the company had ever done. He did not think there would be many other sites, as diverse as Port Otago, to have achieved that.

Financially, the company had performed ‘‘pretty well’’ every year and provided a dividend stream for its shareholder.

Port reforms in the late 1980s resulted in it morphing from the Otago Harbour Board into its present-day form under the 100% ownership of the ORC.

The council’s process of appointing directors and leaving the running of the port to those directors was to be commended, he said.

An audit report of ports owned by local authorities showed the ORC approach was regarded as best practice.

That had made his job as chairman much easier. The board was made up of very good and experienced directors, from diverse backgrounds, and turnaround of directors had been quite low.

Port Otago's property subsidiary Chalmers Properties had been a ‘‘huge’’ part of the business and it had grown very well over the last 10 years.

In recent times, Port Otago had been through change: Geoff Plunket retired as chief executive in 2017, after 29 years with the company, the latter 13 at the helm.

One of the most important jobs a board had was the appointment of a new chief executive and that had been a big process. Some of Mr Faulkner’s timing around retiring as chairman was to ‘‘bed down’’ Mr Winders.

Mr Faulkner said Mr Winders was doing a ‘‘great job’’; he was a passionate Otago person who had brought a different approach to some things and the port company had been very well served by both he and Mr Plunket.

When it came to challenges, one of the toughest was changes by shipping companies, who would decide ‘‘all of a sudden’’ that they were not coming to Otago any more.

Port Otago was a ‘‘huge part’’ of Port Chalmers and the wider Otago region. A very low percentage of freight came out of the Dunedin City Council area — the main area it serviced was the hinterland and a big contributor to its container freight came from the meat and dairy trade in the South.

On reflection, the University of Otago and the port were the first main new entities in Dunedin, both founded within several years of each other and both ‘‘pretty vital’’ to the community.

Port Otago was a good port, it was sheltered and there were a lot of benefits to it.

It was now well set up to continue for the next generation.

Mr Faulkner, who had always had an interest in ships, said he would always be interested in port happenings and watch ‘‘what ships are going where’’, although he quipped he would not be able to ring up Mr Winders to see what was going on.