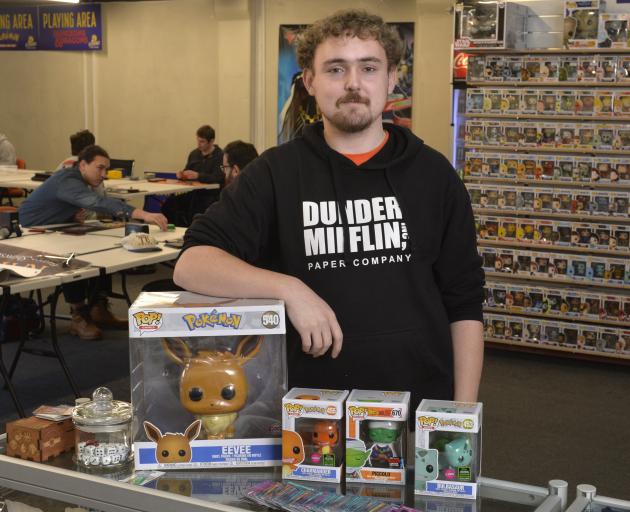 Dice Jar Games owner Greg Mansfield in his new store at an upstairs space on George St. PHOTO: GERARD O’BRIEN
Not many people could say playing a lot of Yu-Gi-Oh! would result in them opening a retail store on Dunedin’s George St.

But 23-year-old Greg Mansfield has done just that.

His store, Dice Jar Games, was set to open at the start of April before Covid-19 spread around New Zealand and the country was put into lockdown.

Dice Jar Games is a store where table-top game players can go and actually play games.

The idea for the store came from his love for the Japanese manga TV series and game Yu-Gi-Oh!

"We were playing as a club at OUSA for a few years.

"Because of reasons that meant we had to disband that club we moved to another store. I ... started running the Yu-Gi-Oh! side of things and as that went on I got promoted to be the assistant manager of the game store there."

He said customer experience was not a priority at that store, but would be his focus in his new store.

"Our slogan is ‘for players, by players’," Mr Mansfield said.

"Something that’s been missing in Dunedin for quite a while ... is one place that all table-top gamers can come along, play the games they want to play and have a good experience."

The games his shop specialises in Yu-Gi-Oh!, Magic: The Gathering, Pokemon as well as Flesh and Blood — a New Zealand-made game.

"That’s really picking up a lot of steam at the moment," he said.

They were also selling pop culture collectables and merchandise.

Mr Mansfield planned on holding weekly events at his store as well — including a Dungeons & Dragons night on Wednesdays.

"A big part of the business is actually being able to run weekly events for all the card game players."

The store is upstairs at 324 George St, which was a lot more affordable than a ground floor tenancy.

He said government support had helped him get through the lockdown and Alert Level 3.

He took out the wage subsidy and a small business cash loan.

With the new economic situation taking hold post-Covid-19, Mr Mansfield was slightly concerned fewer people would be willing to spend.

"There are a lot of people that are going to lose their jobs and aren’t going to have that disposable income they may have had previously.

"It is something I have to worry about a little bit."

He would keep "soldiering on", he said.

"I’ve signed a lease, I’ve got this business to do and I’m stoked to be doing it. So far it’s going quite good."