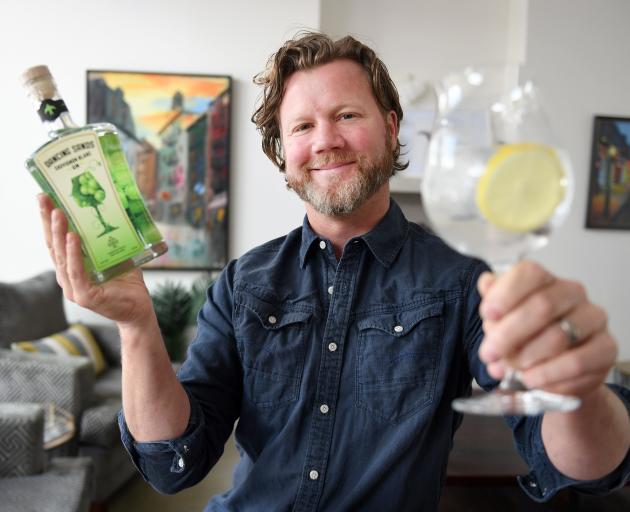 The brain behind the world’s first New Zealand sauvignon blanc gin is Dunedin-raised Peter Rawling, who has returned home after 20 years away working mostly in the beverage industry, both in New Zealand and overseas.

Two years ago, he was head-hunted from the wine industry by a start-up spirits distillery/brand called Dancing Sands, which was focused on the burgeoning premium gin category.

But Mr Rawling quickly realised New Zealand gin was not known in the international market; it was known for meat and dairy products and sauvignon blanc wine. "It [sauvignon blanc] has been one of our greatest export success stories," he said.

So he thought if the two New Zealand-produced drinks could be combined to create something "new and delicious", that might attract more attention from international buyers and markets.

After 18 months of working on it — Covid-19 lockdown provided additional time for "tinkering" for the gin maker — Mr Rawling declared they had nailed it.

Dancing Sands Sauvignon Blanc Gin was now available in New Zealand and there was already interest from overseas.

He was proud of the achievement, saying he had come up with lots of ideas over the years but this time he was part of a business and involved with developing a product from ideation through to taking it to market and launching it.

Mr Rawling grew up in Dunedin where he completed an arts degree at the University of Otago, in history, English and classics — "because that’s what

you did when you didn’t know what else to do".

He had two step-parents who were teachers, so he thought he would give that a crack, completing a diploma of teaching.

But after three months of teaching, he decided it was not for him. Then he saw an advertisement in the Otago Daily Times for a job with Villa Maria Estate.

Acknowledging he did not know a shiraz from a chardonnay, he knew he liked dealing with people and he was hired in 1997 before the company became the "juggernaut" that it is today.

He had a great time "cruising around" Otago and Southland for a few years, excited to have a car and mobile phone provided, and selling wine, he recalled.

From there, he headed to Japan for a couple of years where he was a semi-professional rugby player and keen snowboarder based in the snow mecca of Sapporo.

That was followed by a move to London where he got back into the wine industry as a sales representative with Lion Nathan, working his way up to running its UK and European wine division.

He was then approached by Spy Valley Wine, a New Zealand-owned and Marlborough-based company which wanted him to work for it in a global sales role.

That was a great way for him to work his way back to New Zealand — but he was not quite ready at that stage to go from London to Blenheim. His now wife was working in Melbourne and so he moved to the Australian city for three years, while continuing to travel extensively around the world developing Spy Valley’s business in 34 countries.

The couple married and, wanting to move closer to home, they shifted to Auckland for a couple of years where they started a family. They then moved to Marlborough; while Mr Rawling had been heavily involved in the wine industry, he had never lived in a wine centre.

The family was there for four years, and Mr Rawling acknowledged it was a big transition from big city to provincial town life; however, it was also an easy lifestyle in which to raise a family.

Two years ago, he was approached by American Ben Bonoma and his British wife Sarah who had moved to New Zealand.

They did not want to stay in corporate jobs and wanted to have their own business.

Travelling to Golden Bay, they found a distillery for sale on Trade Me.

They had no idea about making alcohol, nor did they have any knowledge of the industry, but they looked at the gin category and could see the growth and trends already happening and decided to buy it. It was a "little shack", which was sold as a going concern, Mr Rawling said.

Over the last couple of years, gin had increased in popularity in New Zealand, a trend that had taken off in Europe probably about a decade ago. As with the craft beer boom, there was a proliferation of premium, high quality, differentiated versions.

"Premium gin is very much our focus now as the premium gin category has been exploding internationally for several years now, and New Zealand has really started to see this here in the last couple of years."

At Dancing Sands, they developed a range of gins including such diverse offerings as wasabi, saffron, chocolate, and strawberry and rhubarb, along with classic dry.

They realised they needed experience in beverage brands, sales and marketing and global networks and "through the grapevine", they found and approached Mr Rawling.

Realising he was "getting comfortable" in Blenheim, he was ready to take on something else. He was offered equity in the business and it was a new challenge in a growing category, both domestically and globally — "so there was excitement in that".

Initially, when he pitched the idea of a sauvignon blanc gin, the others were not sure, but he knew they had to focus on something that would get the attention of export markets. And that had to be something with sauvignon blanc in it, he said.

Feedback had been "phenomenal" and he believed it could be huge, with the audience being much bigger than just the gin market.

When Mr Rawling moved to Dancing Sands, the obvious city to move to was Nelson where the company’s two founders lived. But he did not need to be in Nelson, nor did he need to be near the distillery in Golden Bay, and Dunedin was the "obvious choice".

It was time to come home, and put down some roots, with his wife and the couple’s two daughter’s aged four and six. The fact he could bring his job with him was "awesome".

Dunedin was a city that was "hugely different" to when he left. Having lived in vibrant cities, he wanted to continue to be somewhere vibrant while also enjoying the lifestyle.

What had happened in Dunedin over the last five years was "amazing" — "it’s just boomed", he said.

Arriving in the city in December last year was also perfect timing given the subsequent Covid-19 lockdown.

While he had never really had a strategy to return home, living his life "pretty organically", he had ended up back in his hometown without any real plans.

"Dunedin’s cranking and I want to be a part of it. It’s just cool to be here and cool to do something like this."