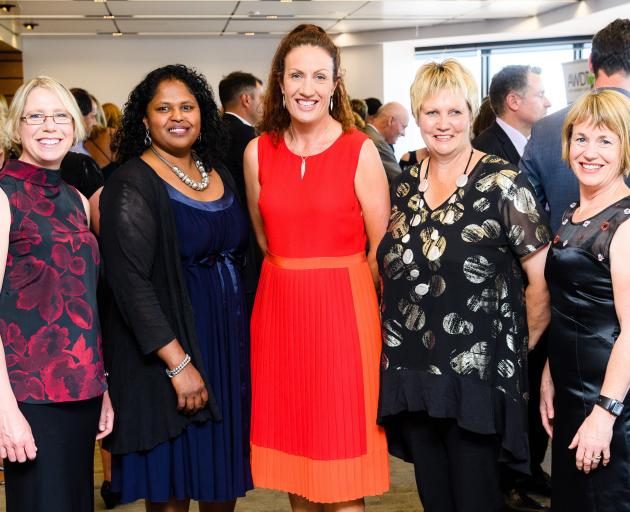 When Stephanie Pettigrew started her governance career 12 years ago, it could aptly be described as baptism by fire.

The Dunedin lawyer — now a partner at Marks and Worth — was looking to give something back to the community when an email was circulated at Anderson Lloyd, where she was working, to say a mental health trust was looking for trustees.

It was a small organisation with voluntary trustees. She became chairwoman at a time it was encountering some major funding challenges and it was facing either winding up or merging with similar organisations.

Prior to the latter happening, the trust’s manager stole from it. The fairly unsophisticated fraud was picked up by its auditor and the person was prosecuted and subsequently convicted, and paid back the money.

But it took about a year for police to pursue the prosecution and Mrs Pettigrew had to prepare all the documents. She was in Queen Mary maternity hospital, about to give birth, when she was on the phone to the auditor. And that, she said wryly, was the beginning of her governance career.

The board was committed to pursuing prosecution — "I think one of the things that connected us the most was a sense of betrayal. I think we all felt betrayed in a small organisation, particularly a small not-for profit. We were all quite personally hurt by it."

There were also concerns that, if not pursued, the manager could do the same thing at a similar organisation, and trustees also felt a responsibility to the trust’s funders.

As well as the value of auditors, Mrs Pettigrew said she also learned the value of "trusting your gut". When financial reports were not ready for meetings, despite promises they would come, she started to get "a bit of a hunch" that something was not right.

The trust later merged with three other organisations and she became the new entity’s first chairwoman. It was a learning curve bringing four different organisations together, and creating a new trust, board and culture.

She had learned largely by teaching herself, as she did not necessarily have a mentor or more experienced trustee or director to turn to at that time. Being a governor in an organisation like that also meant the distinction between governance and management could be "blurred very quickly" and she was probably too hands-on at times, she said.

She finished there about four years ago; having being part of the initial trust she was on which took it from the "brink of oblivion" and seeing it merge into a much bigger organisation was very rewarding, and she enjoyed the "big picture" of watching the organisation grow and being part of it. 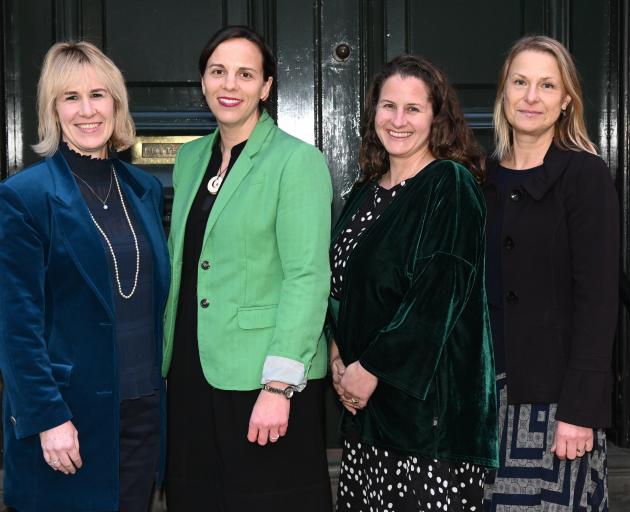 Dunedin directors Trish Oakley (left), Jessica Palmer and Stephanie Pettigrew, and Institute of Directors Otago Southland branch manager Philippa Murrell. PHOTO: LINDA ROBERTSON
She was then asked to join the board of the much bigger Presbyterian Support Otago and she is now deputy chairwoman. She is also director of PSO retirement villages, and recently joined a school board.

She had previously been the first intern on the board of Port Otago, and the only woman on the board at that time. Being on a commercial board which reported to a shareholder was a completely different but great learning experience, she said.

Last year, she was runner-up to Jessica Palmer in the Institute of Directors Otago Southland branch emerging director award. Prof Palmer was an expert in trusts and Mrs Pettigrew also worked in that area so the pair combined to present a seminar, through the institute, for not-for-profits and charities, which was well attended. That was a great opportunity to raise their profile and give something back.

As part of her emerging director prize, she had received mentoring from director Tony Offen for the past year. That had been "incredible" and the biggest benefit, she said.

One of the things that had been particularly helpful was incorporating her governance experience into her day job — "So much we do as governors is relevant. My governance career has enhanced my career as a legal adviser."

While not actively looking for other governance roles, governance was something she wanted to continue in as it provided lifelong learning, she said.

Know your value proposition and put yourself out there.

That’s the message to aspiring directors from Trish Oakley, head of Summer at Forsyth Barr and Otago-Southland branch chairwoman of the Institute of Directors.

It was all about knowing what you offered an organisation and not being scared to put that offering out there, connecting with people, becoming known for your opinion on your topic and sharing your views, she said.

"Connect with influencers, go to presentations and AGMs, contribute to consultation ... put yourself out there," she advised.

Women also needed to encourage other women to do that. Feedback should also be sought from trusted parties — "the good and the bad, you want to hear it because that is how you can refine your development programme and progress your governance career," she said.

Ms Oakley’s own governance career began in 2007 and she quickly discovered that she loved it — the strategy, the interaction with people, the opportunity to work with others to make change and the diversity of views around the board table and learning how to interact with that.

Her first commercial role came with Dunedin Airport in 2012 and it was pivotal because of the supportive group of experienced directors and their guidance.

"That helped build your confidence and away you go," she said.

Like Mrs Pettigrew and Prof Palmer, Ms Oakley said she was very fortunate to have an employer who was supportive about giving back to the community and, she agreed that what you learned in governance contributed back to "what you do everyday".

Reflecting on the period since she was runner-up in the emerging director award in 2012, Ms Oakley said there were a lot of new issues to contemplate that were not so significant previously.

They included cyber-security, supply chain, climate change, an increased emphasis on tikanga and Treaty of Waitangi, so it was about thinking how those things came together alongside traditional governance around strategy.

"There’s a lot of contemporary governance issues to contemplate as a governor," she said, adding that continually upskilling was very important.

Covid-19 had been a very important lesson in "not to over board" as when something like the pandemic affected multi-organisations, you could "not give everything to everyone all at the same time", she said.

While the pandemic was a challenging time, at its core was the need to realise you were dealing with people and recognising they needed different things. While there was some commonality between situations, helping people feel comfortable and confident in what they were doing and recognising unique family environments was crucial.

Diverse views — lots of different perspectives — were needed around board tables. For really good outcomes for business, experienced people were needed but also fresh ideas and people to challenge thinking.

Ms Oakley enjoyed the roles she did and working with IOD Otago-Southland branch manager Philippa Murrell, with the ability to help other people on their governance journey.

"For me, it’s just continuing to invest in governance education. You are always learning," she said.

JESSICA Palmer loves her job at the University of Otago.

In December last year, the university announced Prof Palmer, the dean of Otago’s Faculty of Law, had been appointed to the role of pro-vice-chancellor, humanities, following an international recruitment process. She continues to teach in the law faculty.

As well as that, she is a board member of Presbyterian Support Otago, chairwoman of Laidlaw College, deputy chairwoman of Knox College and Salmond College Inc and a trustee of the Wilberforce Foundation.

Like many others, her foray into governance began through her children’s education when she was on the board of an early childhood organisation. Governance was particularly useful for her to be seen in a circle that was wider than the university, where she first joined the law faculty in 2005, she said.

For every experience, she looked for where she could contribute but also the lessons she could gain. While there was the perception of directors predominantly being older men, she had learned a huge amount from older — and generally male — directors, and was in no doubt that she was a far better governor for that.

She enjoyed the opportunities she had to meet people on the governance journey , and the connections that were formed. Taking part in the emerging director award, which she won last year, was about networking and learning and "all it brings you into contact with".

The way in which people gave back looked different to different people. She hoped she would always retain some form of governance, particularly for not-for-profits or community faith-based organisations.

And as far as being busy, she acknowledged she was — but what she did was what she enjoyed.

Being selected for the Agri-Women’s Development Trust’s Escalator course was where it all began for the Maniototo farmer.

"That was what really set me alight, gave me the skills and confidence," she said.

There has not been a female farmer-elected director on Alliance’s board since her election; shareholders would vote for women, it was about getting them to stand, she said.

At the end of last year, Mrs Sangster said this would be her last term on Alliance’s board and she was very focused on trying to get more women to stand.

AWDT’s growth had been a real success story. Many of the women on boards in the rural sector had come through the Escalator programme, while she believed there were many more in communities that would step up.

Mrs Sangster is also a director of rural supplies co-operative Farmlands, chairwoman of the Community Trust of Maniototo and committee member of Tiaki Maniototo.

She acknowledged she had not got every role she applied for, saying aspiring directors needed to be resilient.

"You don’t always get things you apply for and it can be hard," she said.

But it was also very rewarding and intellectually stimulating, and she had met many "wonderful people". She liked to think she reflected the view of women, while conscious that it was not all about women.

When she was first married, she did a lot on farm; now she did jobs that she wanted to do, rather than had to do — "I’ve got a bit choosy" — and her husband David had been very supportive and understanding. They also now employed labour which helped when she was busy with governance commitments.

She was up for re-election for Farmlands this year and was keen to be re-elected. She was excited about the recent appointment of Tanya Houghton as chief executive and would like to be "part of that journey".