What the proposed waterfront development will look like. Image: Animation Research
It has been a year of significant growth for Otago and Southland, with stellar performances across primary exports and investment in infrastructure as key highlights for the region. Brent Melville takes a look at the highs and lows of the business year.

Farming continues to play an influential role in the economies of both Otago and Southland. With Chinese demand continuing to underpin beef and lamb markets, New Zealand’s export receipts for lamb and beef were up by $600million — an 8% increase to $7.7 billion. Otago and Southland farmers played their part, leading the country in growth of its beef cattle herd, up by 12.9% and 12% respectively on the back of strong pricing.

Dunedin and Invercargill got a share of the $3 billion provincial growth fund pie. Dunedin received a total of $60million to kick-start its waterfront development, bring engineering back to life and promote the growth of digital businesses in the city. Invercargill received a $23.1million fillip, including $19.5million for its inner-city redevelopment and $3.6million to support its engineering and manufacturing sector. 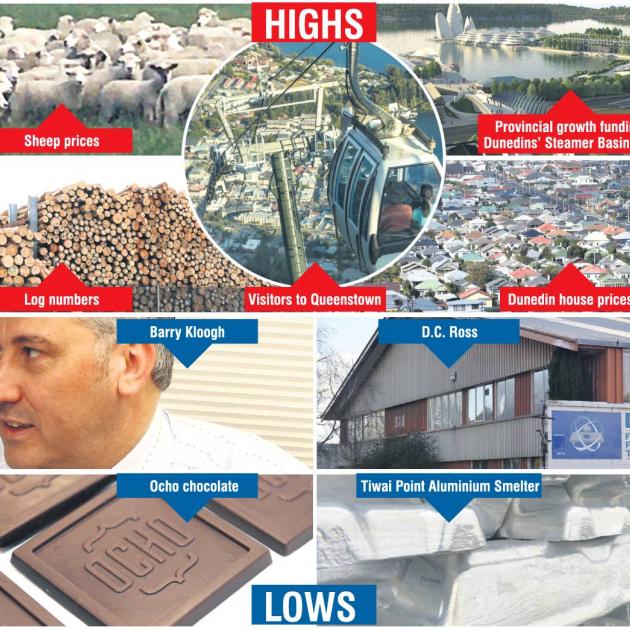 Overall forestry exports for the year to the end of June reached $6.9 billion, more than half of this value in the form of log exports. Port Otago shifted a record 1.15million tonnes of logs, an 8% increase, the majority headed to Asian markets. City Forests chief executive officer Grant Dodson said while there had been a price correction due to high stockpiles of logs in China, demand remained strong from the South Korean market and was likely to continue into 2020.

Tourism is the country’s No1 earner and Otago remains a focal attraction for both the international and local trade. Cruise-ship trade looks set to inject $66million into the region via Port Otago, on the strength of a record 128 ships this season. Queenstown-Lakes continues to creak under the strain of ever increasing arrivals, while the jury is still out on a new Wanaka airport, freedom camping rules remain a bone of contention and a proposed bed tax is being resisted by the productivity commission. However, latest figures from Stats NZ show continued rising numbers, with Queenstown-Lakes tourism contributing an estimated $2.8 billion a year to the economy

Dunedin homeowners are sitting tight as the city’s house prices continue to break through new ceilings. Latest figures show homes in the city were at a record $520,000 last month, a full $90,000 dearer than at the same time last year. The story is much the same throughout the region, with average prices in the Waitaki district at $345,000 and Clutha at $280,000. Queenstown-Lakes and Central Otago have started to show a slight slow-down, though prices are still at an average $945,000 and $530,000 respectively. High prices are not helping new home buyers in Dunedin, local real estate agents citing a lack of stock and high demand leaving lots of house-hunters out in the cold. They expect more of the same in 2020 on the back of continued low interest rates.

Mr Kloogh has been the subject of a Serious Fraud Office investigation since early May; no charges have been laid against him.

In October, New Zealand’s only aluminium smelter, at Tiwai Point, was put on notice as its joint Anglo-Australian and Japanese owners faced up to challenging market conditions. Majority owner Rio Tinto has begun a review of the smelter with a view to either curtailing operations or closing the 48-year-old smelter outright. It goes beyond global market prices. As the country’s largest user of electricity, it is as much about how much the New Zealand government is prepared to bend on its electricity prices, more particularly transmission costs from the relatively nearby Manapouri power station. At issue are high energy costs — in particular, transmission costs. As all transmission costs are averaged out over the country, in effect the company is subsidising the rest of the country. The South Island, which generates the majority of the country's energy through renewable hydro, geothermal and wind, also pays a disproportionate share. So, how this plays out could have implications for about 3200 Southland jobs.

Could have been worse. Higher-than-expected costs of its new factory combined with low initial sales saw Dunedin craft chocolate company Ocho Chocolate teeter on the brink of closure before a restructuring effort this year would seem to have had the desired effect. The craft chocolate company was founded in the wake of the closure of the Cadbury’s plant, raising almost $2million in crowdfunding in 2017.

While it was mostly good news on the engineering front (see PGF), not so much for the eight employees of Dunedin business D.C. Ross. Owner Scott Technology confirmed it would be closing the 110-year-old business from February 2020 as it "couldn’t compete" with larger players in the automotive industry.