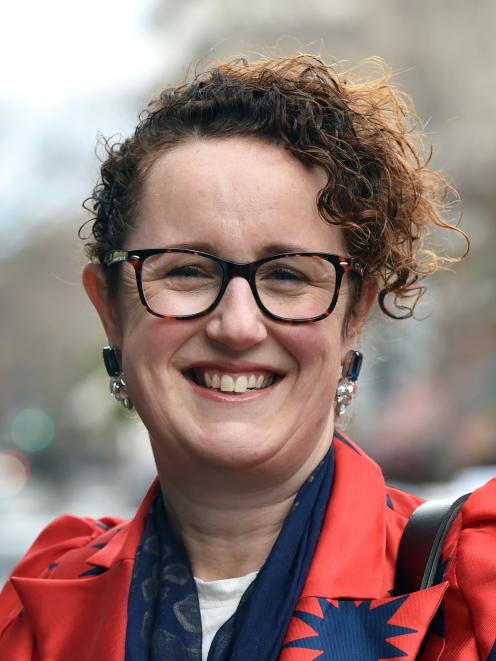 On the surface, rock lobsters, a historic prison building and a primary school do not appear to have much in common.

But for Kate Hesson, the variety of organisations she is involved with simply reflects how "varied and muddled'' her brain is.

"I'm always thinking. I'm interested in everyone and everything. The more variety, the more stimulated I am,'' she said.

And it is people who drive Ms Hesson (42), who is particularly drawn to down-to-earth and unassuming folk, such as those involved with the Dunedin Prison Charitable Trust and the Otago Rock Lobster Industry Association.

"I love the people. It's always the people I'm driven for,'' she said.

Down to earth herself, and with an engaging personality, Ms Hesson was recently named the Institute of Directors Otago-Southland branch Emerging Director for 2019.

The award was established to foster upcoming talent in governance through mentoring, formal training and access to leading speakers at events across Otago and Southland.

Ms Hesson is a lawyer who started her own Dunedin-based consultancy firm Hesson Consultancy last year, which is focused on governance, organisational change and dispute resolution.

That followed what she quipped was ''a bit of a midlife crisis'' in which she examined what she was doing.

Law had been a very good grounding for life and her world view, but it was not a career she could see herself doing for life.

Originally from Milton, Ms Hesson's first taste of law came through her father, Peter Keddell, who was a local lawyer and also Clutha coroner.

That was law very much in the community sense - "not in a cut-throat corporate competitive sense, not what you see on TV''.

Being collaborative and working with people was one of Mr Keddell's influences. And it was also where she learned about balance - a phrase she now uses frequently. Her father would never have an opinion, instead stressing there were always two sides to a story, and that was something that had stuck with her.

She "fell into law really''; when she was at school, there were not many creative options in terms of a career path.

The brighter pupils tended to be siphoned into law or medicine; she quipped that she could not count very well and had no interest in science.

But she was the debating captain at St Hilda's Collegiate and law was where she was headed.

That boarding school experience was also very valuable, teaching her to look after herself and to be resilient and tolerant.

After graduating from the University of Otago in 1999 with a double degree in law and arts, she joined Anderson Lloyd, specialising in commercial and property law.

She was with the law firm for about 12 years and had several stints overseas with cricket coach husband Mike, living in both Argentina and Kenya.

Experiencing different cultures was lots of fun and a great experience and while in Kenya, she spent time advising NGOs.

She had chosen flexibility and less responsibility from a client point of view because of the stage her family was at.

She had always been more interested in working with people than researching and working behind the scenes.

So she started looking around; she did a few MBA papers at the University of Otago's Otago Business School but decided some of the compulsory papers were not the direction she wanted to take.

She came across the Institute of Directors and was pleased to find the courses available were more aligned with what she was looking to do.

She did some mediation training through the New Zealand Law Society and that was when "a lightbulb went off''.

She could combine that training as well as the collaboration and her understanding there were "two sides to every story'' and put that to use with her legal background.

Mediation was very much about collaboration and trying to find solutions that were not just a compromise. Sometimes, law did not actually produce those outcomes, she said.

And often, by the time businesses had got to mediation, their relationships were "already screwed''.

So she looked at "flipping that on its head''; she wanted to focus on helping businesses and helping people before they had disputes.

She acknowledged that was a hard concept for people to get their head around, likening it to selling a prenuptial agreement to honeymooners.

It was not just for start-ups but for any businesses going through change. At any transitional stage, she believed there was value in having an independent person as a facilitator, to make sure they were "really all on the same page''.

And that was not just about having an exit plan, in case relationships did break down, she said.

"It's one of those things, everyone goes, 'if only we'd talked about this before'. It's a Harry Hindsight moment,'' she said.

There was a lot of mentoring available, teaching people to be better leaders and to have better conversations with employees, but she did not think enough people focused on relationships with business partners.

So she was on a mission to help business owners realised collaboration and having open conversations with each other - and making time to do that - was really key. It was also about enjoying your business as well, she said.

She considered herself a start-up essentially and one of her challenges was to make people realise they "actually should do this''. She wanted to be the fence at the top of the cliff rather than the ambulance at the bottom.

Previously, she never knew such an entity existed but it was a very large, high-value industry and she was enjoying the people she had met through that, she said.

She was also a director of the New Zealand Rock Lobster Industry Council, which was very interesting.

She is a trustee on the Dunedin Prison Charitable Trust, which was formed to save and restore the city's historic prison building, and chairwoman of the St Bernadette's School board of trustees.

She was previously involved with Delta as an intern director as part of a Dunedin City Holdings project.

Ms Hesson admitted having an overactive mind - "I'm a better person when I'm occupied'' - so again it was finding that balance.

And there was also the need to not take on too much. "You need to be able to do a good job with the things you've got.''

Her ability to balance her professional and personal life was something that she had always been quite pleased with.

While not reinventing herself, she was keen to show people there was value in building on everything you had done before, Ms Hesson said.

It was important for people to be brave, she said, citing the couple's decision to spend time living in Kenya.

"If you overthink things, you miss out on all sorts of stuff,'' she said.