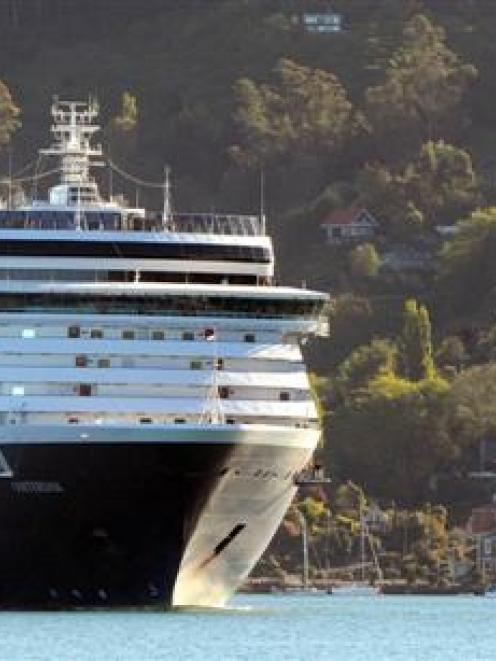 Oosterdam during a visit in December. Photo by Craig Baxter.
Well, it is all over for another six months after Oosterdam brought a very successful cruise ship season to a close last Friday.

During the very busy period, which got away to a late start on October 28, Port Chalmers hosted 73 visits from 21 vessels and Dunedin's share was 10 from five smaller ships.

The calendar was to begin with the arrival of Sea Princess from Akaroa on October 14. However, on that day the ship was still at Akaroa, having been forced to spend the night there because of deteriorating weather. About 700 passengers could not be ferried back out to the ship and had to spend the night ashore.

There were also several other cancellations, the last being that of Saga Ruby on March 14. The classic 1973-built vessel was to call here on its farewell around-the-world voyage before being retired next January.

Its departure from Southampton on February 20 was six weeks later than planned because of machinery problems. As a result, the 109-day cruise was shortened to 66 days, with the middle leg across the Pacific and Indian Oceans being cut out. Saga Ruby was at Cape Town at the weekend getting ready for the homeward run up the west coast of Africa and on to Southampton, where it is due on April 27.

We had our share of first-time visitors, with Caledonian Sky at Dunedin and Celebrity Solstice, Marina, Oosterdam and Voyager of the Seas again showing the flags of operators that are already known here.

Coming up for the first time were the Carnival Cruise Line with Carnival Spirit and Costa Cruises with Costa neoRomantica. So it was an interesting and record season, one that also set port records. Royal Caribbean's Voyager of the Seas became our largest and longest visitor at 137,276gt and 311.12m when it arrived on November 27.

Then the smaller 121,878gt Celebrity Solstice, from the associated Celebrity Cruises, established a new length record of 317.19m when it berthed on December 15.

New names to the harbour appeared last week with calls by MSC England at Port Chalmers, and Genco Challenger and Great Resource at Dunedin. MSC England is a chartered, Liberian-flag vessel owned since new by Deomar Schiffs GmbH, of Bremen.

This 39,812gt, 4132TEU vessel designed to operate at a maximum speed of 24.3 knots was delivered on December 4, 2001 by the Ulsan yard of Hyundai Heavy Industries. Until January 2007, the vessel was on charter to CMA CGM as CMA CGM Vega.

Another product from the Chinese shipbuilding industry, Great Resource, is a standard-design, bulk/lumber-type vessel constructed by the CSSL Guangzhou Huangpu shipyard. The vessel has been in service since May 13, 2010.

The 19,994gt, 31,776dwt vessel is registered at Hong Kong to the ownership of Great Resource Shipping Ltd. It is operated by Sinotrans Shipmanagement Ltd, part of Sinotrans Ltd, incorporated in 2002 and one of China's largest logistical companies.

Contrary to normal practice, the vessel discharged phosphate from Vietnam at Dunedin. This product is much finer than phosphate from other sources and cannot be handled by the facilities at the Ravensbourne berth.

Also registered at Hong Kong is Genco Challenger, also owned by a single-ship company, Genco Challenger Ltd. Although here for the first time under this name, the ship has previously visited the upper harbour and Port Chalmers.

At that time the ship was registered at Nassau as Orchid Bay and was owned by the Evaland Shipping Company, of Athens. That company sold it to the Genco interests in December 2007.

On this visit, the vessel has loaded logs at Dunedin and also Port Chalmers.

As Orchid Bay, the vessel berthed at Ravensbourne on February 1, 2004, then moved down to Beach St two days later to spend three days loading logs.

The 16,978gt vessel has been in service since March 2003 and is another of the successful and popular bulk/lumber design built at Imabari by the shipyard of that name.