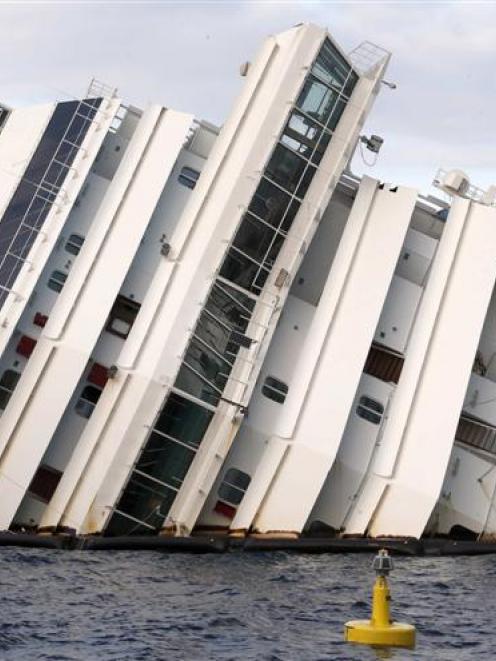 Costa Concordia.
So far, since last October, Port Otago has been fortunate in enjoying a very successful cruise-ship season. Passengers and crew members from all over the world have called during cruises that have not been marred by serious incidents.

However, over the past 13 months, cruise ships have taken a public relations pounding, with unflattering and negative stories appearing.

The period itself was a difficult one for the industry with higher fuel prices, and the ongoing global recession. Then there was the damage caused by Hurricane Sandy to cruise-ship facilities in the Caribbean and along the United States east coast.

Hardest hit has been the Carnival group, firstly after Costa Cruises' Costa Concordia hit a rock off the eastern shore of Isola del Giglio and capsized, a disaster that claimed more than 30 lives.

Then last week there was the distressing news of the engine-room fire that crippled the Carnival Corporation's Carnival Triumph in the Gulf of Mexico. Passengers and crew alike were forced to live in reeking, unsanitary conditions as the ship drifted helplessly before it was eventually taken in tow to Mobile, Alabama. 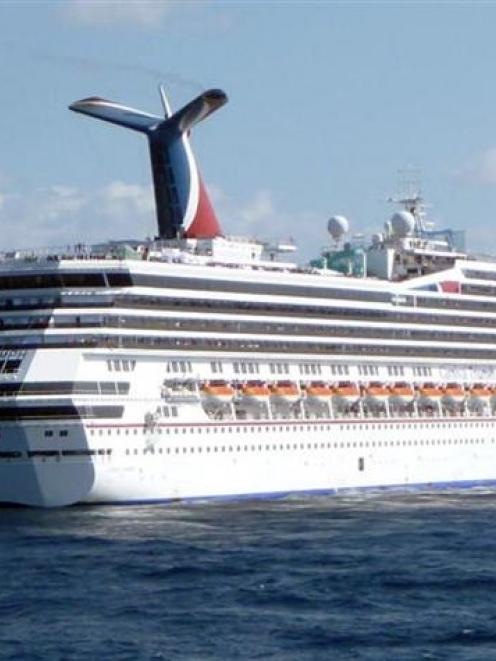 Carnival Triumph. Photos by Reuters.
So what started off in good faith when the vessel left Galveston on February 7, on a short four-day cruise to Cozumel, Mexico, turned into a nightmare that all those on board will never forget.

The ship had been plagued by other mechanical problems recently.

On the previous voyage, an electrical problem involved the ship's alternator. This was repaired two days before the ship sailed from Galveston and was not related to the fire that broke out in the engine room. On Wednesday, Carnival Spirit, the only vessel from the Carnival Cruise Line to call here, returns on its second visit. The 85,619gt, 292.50m-long vessel was built in Finland in 2001.

In comparison, Carnival Triumph is a shorter, 272.82m-long vessel, but of 101,509gt. The ship was a modified version of the 101.503gt Carnival Destiny, shortly to be renamed Carnival Sunshine, the first two passenger-carrying vessels in the world to exceed 100,000gt.

Both were built at the Fincantieri shipyard at Monfalcone where Carnival Destiny was completed in October, 1996, and Triumph during July, 1999. And in July, 2006, their Sestri Ponente yard at Genoa delivered the ill-fated 114,317gt Costa Concordia.

Carnival Triumph is expected to be out of service for two months. But it could take twice as long to repair the disabled container ship Emma Maersk.

On February 2, it was reported that the vessel had encountered mechanical problems when entering the northern entrance of the Suez Canal and began taking in water. Canal authorities then had it removed from the shipping lane and berthed it at the Suez Canal container terminal.

The trouble started when the ship experienced water ingress in the engine room from the propeller oil seal after entering the canal. Initial inspections by divers revealed that the water ingress was caused due to damage to one of the stern thrusters.

Several propeller blades had broken off and caused severe damage to the propeller mounting. This in turn resulted in a crack in the forward stern thruster tunnel and a gear that had been torn loose apparently caused damage to the hull.

Damage was also caused to the 120m-long propeller shaft and the engine room itself was flooded to a depth of 18m. Naval architects later confirmed that a fully-laden Emma Maersk-class ship can stay afloat with full flooding of the engine room. Since the incident, and as a precautionary measure, Maersk has instructed the other vessels in this class to not use their stern thrusters.

Currently the first priority is to keep the equipment submerged in salt water as any contact with oxygen will cause corrosion. The ship will now be towed to Europe for repairs.

The 170,794gt, 397.60m vessel, powered by a 14-cylinder Sulzer diesel, was completed by the A.P. Moller-Maersk group's Odense yard in August, 2006. With its seven sister ships they were the first mega-container ships to appear, but their true 15,500 TEU capacity was not revealed for some time.

On its ill-fated voyage the ship was carrying the equivalent of 13,537TEU, of which 6425 were full.