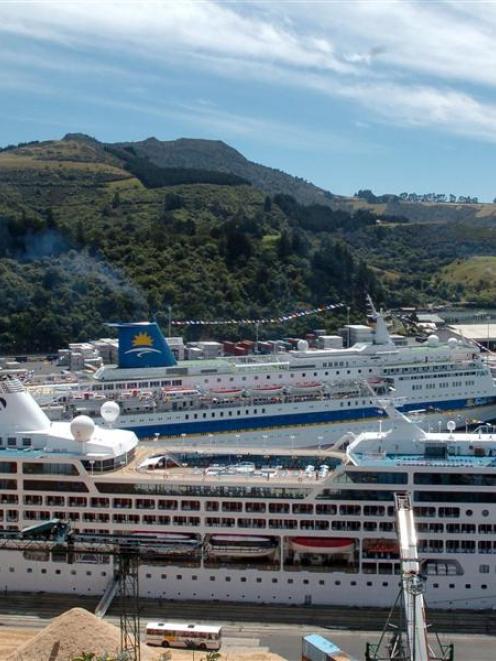 Pacific Sky (front) at Port Chalmers in 2005. Photo from ODT files.
After an eventful career, it is now the end of the line for the cruise ship that used to call here as Sky Princess and Pacific Sky.

Under the name Antic, the vessel left Marseilles on March 12, under tow by tug Ionion Pelagos, and arrived at Aliaga, Turkey, on April 14, to be broken up.

The vessel was built in France by the Chantiers de la Mediterranee yard at La Seyne, for the Sitmar Cruise Line. The vessel entered service as Fairsky in April 1984, under the Liberian flag.

While other cruise ships of that period were fitted with diesel propulsion, Fairsky's twin-screw installation comprised two steam turbines geared to two shafts. Their combined output of 29,500shp gave a speed of 21.8 knots.

Later that year, when the ship was transferred to P&O Australia, it was renamed Pacific Sky. It then made a further seven visits here between February 1, 2001, and January 23, 2006. And under that name the popular vessel carried 275,000 passengers on 200 cruises.

In May 2006, the steamer was sold to the Spanish cruise line Pullmantar which renamed it Sky Wonder on the Maltese register. After being laid up at Piraeus in March 2009, the ship was back in service as Atlantic Star the following month.

But this new role ended when problems with air-conditioning and electricity resulted in the rest of a cruise being cancelled when the ship arrived at Arrecife in the Canary Islands on September 8, 2010. The vessel returned to Marseilles five days later and remained idle there until towed to Turkey recently.

In 2010, the ship was sold to Kyma Ship Management Inc. However, Kyma's plans to convert the ship to diesel propulsion then charter it to a German tour operator never eventuated.

During its career, the ship was involved in several incidents. In January 2005, a scheduled cruise from Brisbane was delayed when a swarm of jellyfish blocked a cooling water intake.

Then on April 1, 2005, P&O Australia had to cancel cruises when extended repair work was required on the troublesome starboard gearbox. The ship returned to service in June. And it was not all plain sailing under the name Sky Wonder. Early on the morning of January 18, 2007, the ship ran aground on a sandbank in the Rio Plata, 3km from Buenos Aires. It was refloated a few hours later without damage.

On March 25, 2008 it was aground again, this time at the Turkish port of Kusadasi. Conditions were described as being a moderately high wind with choppy seas. The ship ended up about 50m from the rocks surrounding the marina and about 150m from shore.

Local tugs had insufficient power to refloat the vessel and other tugs were called in from nearby ports. During the attempts to free the vessel, one tug almost capsized and some crew members were thrown into the water. Sky Wonder was finally pulled free on March 29.

There has been an exceptional run, from late last month to today, of vessels calling to load logs for the first time. Maple Pioneer and Kwela have loaded at Dunedin, Coos Bay visited Dunedin and Port Chalmers, Samjin called there and Lucy Oldendorff is due today.

The 20,867gt, Hong Kong-registered Maple Pioneer has been in service since September 2008 and was built by the Taizhou Maple Leaf shipyard for the associated Maple Leaf Shipping Company.

The 23,494gt Samjin was also built in China at Weihai, by Samjin Shibuilding Industries, and was completed in December 2009. It visited Dunedin in March 2011 under its former name, TPC Samjin to load scrap. The ship has been registered in the Marshall Islands since new.