Investment fund being wound up 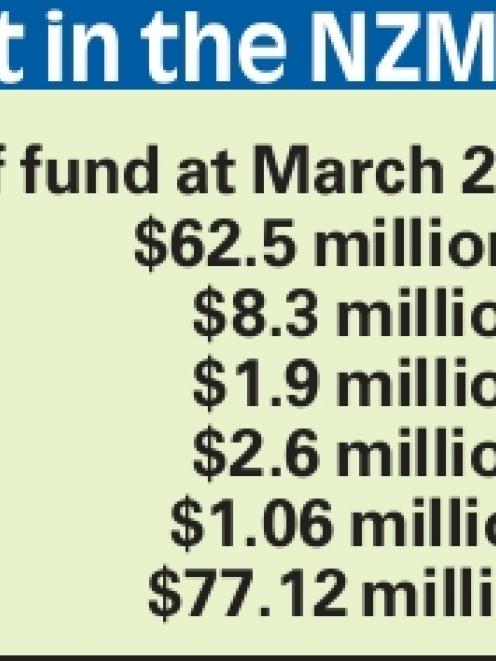 Click to enlarge.
More than 1400 mainly Southern investors face substantial losses after a decision to wind up a $41.4 million Dunedin-based investment fund.

Fund Managers Otago Ltd operates the NZMIT PIE fund, worth $41.4 million. Its $1 units were yesterday valued at 74.5c in the dollar.

The NZMIT PIE fund has been under pressure all year and had suspended capital repayments three times since February, with the exception of one tranche of repayments in May, allocating 50% payment of the request.

As of November 12, and with the assent of its trustees, Trustee Executors Ltd, Otago Fund Managers cancelled capital redemption requests by any of the 1429 investors as they moved to wind up the fund, which could take "some years", managers said.

In a letter to investors, obtained by the Otago Daily Times, chairman John Farry and managing director Peter Hutchison, outlined how the past six years in the property sector had been "challenging in the extreme" and the decision had been made to wind up the $41.4 million fund.

"The current financial climate in general - and the property sector in particular - continue to languish," Mr Farry said in the investor statement.

About 80% of three separate funds on offer are investments made by Otago and Southland people; the NZMIT PIE fund in question was three years ago valued at $99.8 million, which has steadily declined 58% to $41.4 million.

Mr Hutchison said after investors were informed of the wind-up, there was "no reaction from investors". They were "not unhappy with the event", "apart from a small number".

"I don't believe there is a major collapse here, like the finance companies. We will not rush to fire-sale [the] assets. Selling too quickly would force the values down," Mr Ehlers said.

Mr Hutchison said it was best to have an "orderly realisation" of asset sales and investors could next week expect to receive "cessation accounts" disclosing unit values. He said other mortgage trust wind-ups around the country delivered between 80c-$1 to investors, and "hoped to better" the present unit value, which stood at 74.5c in the dollar yesterday.

"It is a loss. Only the future will say where [that loss] ends up," he said.

He expected the wind-up to take about "two years", with the first distribution to investors next April, noting that between now and March next year, $5.5 million was due to be repaid.

The pair said the fund was being wound up because liquidity, or cash in hand, was below the minimum 5% threshold.

"Many of the loans are yet to come to maturity.[With] no cash, no redemptions," Mr Hutchison said.

Of eight impaired mortgages in the fund, of a total 38, the pair would not say how much was involved, nor would they supply details on the overall percentage decline in valuations, citing confidentiality reasons.

Mr Hutchison said legal action was being taken regarding two valuations which involved "mistakes", but declined to give further details.

While dealing in first mortgages, with 66% in commercial properties and 28% residential, some became bad debts, with present values written down for an "as is where is" mortgagee sale, Mr Hutchison said.

In "most cases", the properties were "adversely affected through illegal alterations" under the Building Act, failed compliance with the Resource Management Act or were vacant, he said in an online newsletter to investors.

Asked why the full-year to March 2012 account for the distressed fund had not been posted as due on September 30, Mr Hutchison said yesterday the usual auditor had been purchased by another firm, which started its auditing process afresh.

He said the "recasting" of the full-year accounts had to also take in the more recent cessation accounts, and the subsequent delay to presenting the annual accounts had been "okayed" by the Companies Office, he said.

While the site says the "NZMIT PIE Fund is currently closed for new investments", there is no update on the decision to liquidate the NZMIT PIE fund.

Mr Hutchison said yesterday unit holders first had to be advised of the wind-up and details would be posted online.

Unit-holders in the NZMIT PIE fund can contact Simon Hartley, in confidence, at simon.hartley@odt.co.nz or phone (03) 479-3527.

From October 2007, fund became a PIE (portfolio investment entity). First 90-day capital suspension in February this year; extended again in May and August with reassurances fund would not be wound up.

• The NZMIT PIE fund, with an overall size of $41.4 million, has 1429 investors, funding 38 mortgages at an average size of $1.04 million, in value totalling $39.7 million, according to Fund Managers Otago's website.