Irrepressible queen of all she surveys 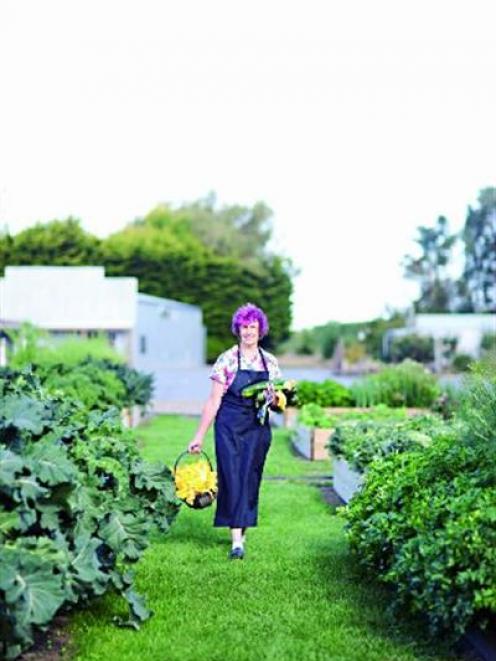 Dot Smith in the extensive gardens at the Riverstone complex, north of Oamaru. Photo by Fiona Andersen.
Dot Smith does not consider herself to be anything out the ordinary.

In fact, the Queen of Riverstone is genuinely perplexed that she could be seen as anything but.

''I am who I am ... and that's a typical Kiwi. A good Kiwi girl. I just think it's like everyday for everyone. Doesn't everybody just live like that at my age?''

To be fair, not everybody has a complex of giftware shops and an award-winning restaurant in their backyard surrounded by expansive gardens, nor a castle being built in a nearby paddock (pictured above).

Or pink hair for that matter.

But for the irrepressible Mrs Smith (66), farmer, gardener, jam-maker, businesswoman, mother and grandmother, it has simply been her life.

Sitting on the veranda of Riverstone Kitchen, the restaurant run by her son Bevan and daughter-in-law Monique, north of Oamaru, and dressed in paint-splattered overalls and gumboots, her pink gardening gloves a good match for that trademark hair, she laughs that it is a ''crazy place''.

Even at 9am on a Tuesday, on a day the restaurant was closed, it was a hive of activity. 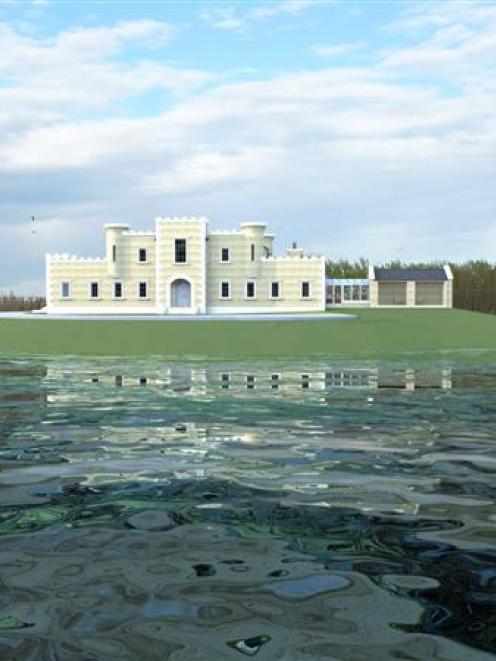 The future castle. Image supplied.
There was the chef who was off to water the tomatoes - everyone seemed to multi-task around the place - people calling in to visit the shops, or the restaurant, the resident gardeners at work, and Mrs Smith herself good-naturedly fielding queries from staff.

Asked how she coped with having such a busy operation literally functioning in her backyard, with the house only a stone's throw away, she said she did not see it.

''I just switch off from it, I think, because we work so much. It's not like a normal person that sits at home and does things at home. I'm in my home probably once a day, if I'm lucky.

''Nothing bothers me about it, except some people are quite disrespectful. People help themselves to things in the garden, they'll pick my pears and pick my apples and they do all sorts of things.''

She cited the recent example of a guilty visitor who admitted to pinching an apple off one of her trees.

Without thinking, she told him she hoped it was sour.

A strong work ethic was instilled in Mrs Smith by her parents when she was growing up on a small dairy farm north of Auckland.

That had been passed on by Mrs Smith and her equally hard-working dairy farmer husband Neil to their two sons Mike, also a dairy farmer, and Bevan.

Mr and Mrs Smith moved south to Riverstone more than 30 years ago, buying what she described as the worst farm in the district.

But it was the only farm in the district that was for sale and they did not have a choice.

She came from her ''gorgeous garden'' to a house where there was not a tree, a path or even a clothesline, and in close proximity to both the railway line and the state highway.

There was nothing to protect them from the wind, they always had colds and they had ''nothing to hide behind''.

But they swung into gear, developing both the farm and the garden and have subsequently added to their landholding.

They now own six dairy farms running more than 4000 cows.

Mrs Smith's days start a little later now - ''mainly because I'm so tired from the night before'' - and she usually rises between about 6.30am and 7am.

Mr Smith was responsible for ''all the trouble-shooting'' on the farms and his phone started ringing about 7am.

The couple usually had dinner together about 7.30pm, but, if he missed that, then it could be as late as 9.30pm or 10pm.

Again, Mrs Smith did not see the couple's zealous work ethic as being anything unusual.

''I don't think anything about working.

''I don't even think about it. Every day is an opportunity to do more things. You just think `how many things can I do today?'

''You just fit as much in as possible, I don't say 'I'll do that tomorrow, tomorrow you get more things done'.

In her new book Dot - Queen of Riverstone Castle, which she has written with Nathalie Brown, Mrs Smith said she believed she and her four sisters grew up loving beautiful things because they had nothing as children.

''Although we didn't want for love, material things were non-existent. We wore hand-me-down clothes, made the best of everything, and grew up to the old adage 'waste not and want not'.

''We couldn't afford a throw-away attitude and we're all still pretty canny when it comes to getting the best out of every dollar we spend,'' she wrote.

That lack of money continued into the earlier years of married life.

''No money was no money, I've always just accepted it and moved on. I've never made an issue about having no money.

She sewed her husband's clothes, from his overalls to his pyjamas, made the boys' clothes and even their pillowcases.

But money was not a driver when it came to the Riverstone operation and development, Mrs Smith said.

''All we do is employ an awful lot of people. The money goes around in a huge circle, supporting a lot of families,'' she said.

Mrs Smith admitted Riverstone would not be ''like this'' if her chef son had not returned home, in what was an unexpected move, and established a restaurant in a paddock.

Initially, the plan was to build a small cafe alongside the gift shop complex. But the couple's background was more restaurant than coffee and cake, and the project became more ambitious.

Riverstone Kitchen, which opened in November 2006, was named supreme winner in the Cuisine New Zealand Restaurant of the Year awards, the first time a South Island restaurant had won the title.

Often found working in the extensive gardens, Mrs Smith derived fun from the comments of visitors who were oblivious to her identity.

''I'll be weeding out in the garden, they'll go: 'these people must be rich' ... I'd be just about wetting my pants,'' she said, laughing.

Then there were the ones that were expounding their knowledge about the castle which is being built on an island at Riverstone, complete with dungeon, drawbridge and towers.

Mrs Smith's dreams did not stop with the castle, and she said that there would be further development on the property.

• Dot - Queen of Riverstone Castle will be launched at the Fenwick School Hall, in Oamaru on Monday, April 28.

Tickets are $15 from Paper Plus or a member of the North Otago Lions Club, with proceeds to local charities.

• Brought up on a small dairy farm north of Auckland

• Moved to North Otago more than 30 years ago