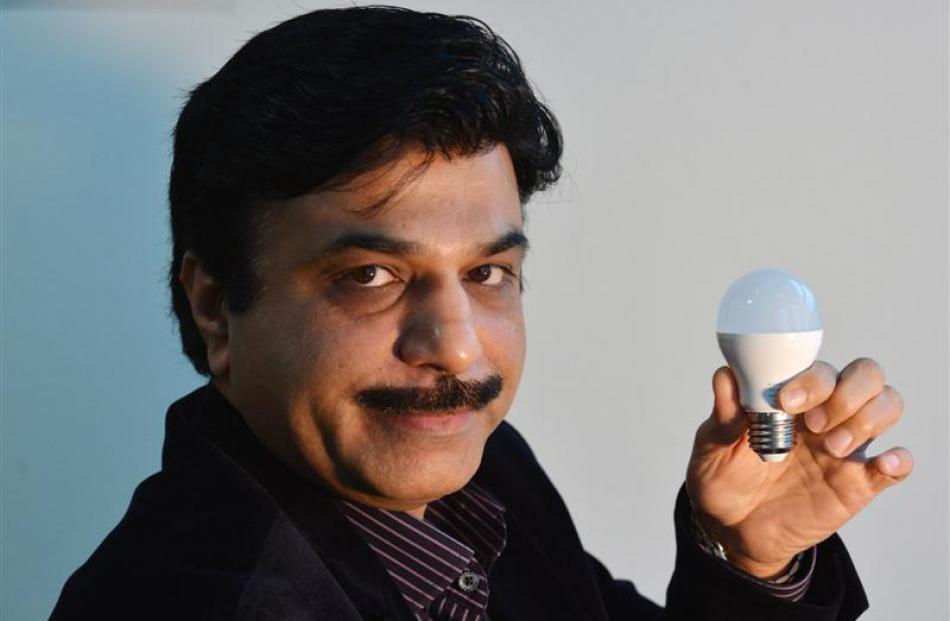 Mr Ahmad, who is completing a PhD in management at the University of Otago, was team leader of LED Light Australasia, the winner of this year's Audacious business challenge.

He and fellow team members Giovanni Stephens and Namfon Kumsem impressed the judges of the student start-up competition.

Now the plan is to bring the project to fruition.

Target customers were in New Zealand and Australia, while he also believed there was ''huge'' export potential for LED tube lights and lamps in the Middle Eastern market.

Lighting is not new to Mr Ahmad. It has been his family's business in Pakistan since 1979 and he has many contacts in the industry.

Electricity could be saved by using energy-efficient solutions.

Compact fluorescent lamps and tube lights were filled with mercury vapour that was hazardous for the environment and health, he said.

Consumers were reluctant to buy LED lights due to expense and longevity concerns, and the quality of some lights had been questioned.

Sometimes the fixtures needed to be changed, along with the lights.

An assembly plant in New Zealand would solve the quality and price issue and provide a solution for customers who were interested to use the same fixture with an LED light, he said.

He estimated the energy savings for a household, over 15,000 hours, assuming there was a switch from 17 incandescent bulbs to LED bulbs, would be $3179.

The second phase of the business was better solutions for the street lighting sector.

Dunedin City Council figures showed there were 14,920 street lights that illuminated 4300 hours a year, using high-pressure sodium lamps which were 15 to 25 years old.

Many of them needed replacement each year.

Street lighting cost the city about $1million a year for the electricity and about $400,000 in maintenance.

Having LED lights assembled in New Zealand would make it easier for the council to switch over to them to get longer-lasting, maintenance-free street lighting, he said.

There was a move around the world to more environmentally friendly bulbs, but the shift was taking some time in New Zealand, Mr Ahmad said.

He was excited by the export potential of his business idea, particularly the ''huge potential'' in terms of street lighting in Australia, and also in the likes of Dubai, where many big parking lots were illuminated by fluorescent tube lights.

Mr Ahmad's supervisor had told him about Audacious and he initially submitted a brief plan.

When the project made the top 20, a business plan was completed and the idea was pitched in a Dragon's Den scenario, which was an ''amazing'' experience.

He hoped to attract some investors and to be implementing the venture by next year.

He also had another business idea involving solar panels, but that is another story.