Live sport’s getting a full-time home in Queenstown once things kick off at a new bar boasting 15 TV screens.

Every kick, grunt and gear shift will be heard at The Locker Room Sports Bar, with co-owner Romain Cunat promising to end the usual fight in pubs between some wanting the commentary and others wanting music.

Instead, he says the audio will match whatever sport’s playing on their main screen — a whopping 86 inches across, set into a wall resplendent in artificial turf and painted with American football lines.

The Locker Room will be the finished product of a $200,000 revamp of the former Brecon
Street bar, Muskets and Moonshine.

On completion there’ll be capacity for more than 350 punters.

Cunat, a Frenchman and big NFL fan, has been living in Queenstown since 2014, working various hospo jobs, but mostly notably in his current role as general manager of the Good Group. 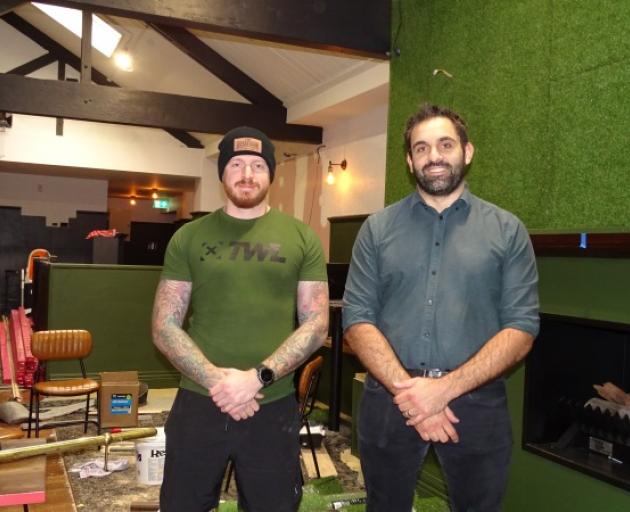 Hayden Davison and Roman Cunat take stock of the work ahead of them. Photo: Mountain Scene

His business partner Hayden Davison brings equal experience in the trade and will leave his role as manager of Jervois Steak House, which he moved from Auckland to open in 2012.

The pair, both in their early 30s, are now ready to go it alone and believe they’ve spotted a gap in the market for an all-day sports venue.

‘‘It’s scary for us and there’s a lot of pressure to get it right, and obviously we’re quite young, but we wouldn’t have had this opportunity to open a bar, if it [Queenstown] hadn’t been going through a recession,’’ Davison says.

‘‘We’ve found a niche, are putting all our years of hospitality into it, and hope to create some where people can come to enjoy sports and good service.’’

He says although they hope to benefit from the return of tourists with the trans-Tasman  border and an eventual return to normal, their main aim’s to provide some thing for the locals.

‘‘We are trying to capitalise on that local market because there is such a sporting  community in Queenstown.’’

The guys also plan to install two games consoles so people can play the likes of FIFA, and they’ll eventually host e-sport competitions.

‘‘It’d be amazing if the council would one day allow tables out side and have it as a proper dining, hospitality precinct, especially with all the development going on.’’

Initially the sports bar, which is spread across two levels, will employ five staff alongside the owners who will be out front and centre.

They plan to pull their first pints in mid-June, just in time to show the UEFA European Football Championship.