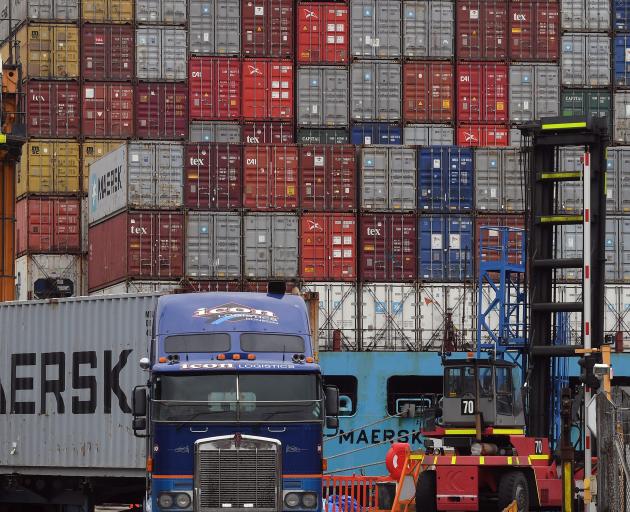 A Maersk container ship in Port Otago. PHOTO: STEPHEN JAQUIERY
One of the world's biggest shipping companies is being told to use New Zealand crew to move empty containers from Auckland to the South Island.

Faced with delays in the North Island, Maersk is bringing in two ships to shift containers to South Island ports to meet export demands, but the Maritime Union said the company should be using New Zealand resources.

The container-shifting operation called 'Sirius Star' will begin next weekend.

The two Maersk ships will be operated by an entirely foreign crew, with a rotation across five New Zealand ports and two in Fiji.

The head of market at Maersk Oceania, Therese Blank, said this would reduce shipping delays to key markets and help meet the demand for the country's exporters.

"If we were not putting in these additional vessels, we would not be able to supply containers to meet the demand for the agricultural exports, because the containers will be stuck at the Ports of Auckland or in the North Island.

"So from our view, we're really supporting the economy and we are enabling the supply chain by bringing in additional vessels," she said.

The Maritime Union's Craig Harrison said he understood Maersk's decision to reposition the empty containers, but more effort needed to be made to work with New Zealand shipping companies.

"Why does a foreign company think it can just waltz in here, bring in a foreign ship, move cargo around New Zealand, and not even talk to New Zealanders about a solution," he said.

Harrison said Maersk should be using New Zealand vessels and their crew.

"We prefer that the Maersks of the world would actually use New Zealand ships. You know we'd hope Maersk would actually talk to the New Zealand-based companies because they're making good money out of taking our containers to the foreign markets.

"It's only fair that they should invest money back into New Zealand and the opportunity would be through the likes of Pacifica," he said.

Harrison said Maersk should use that vessel - which is crewed by New Zealanders - to relocate the containers.

He said despite New Zealand operating only one container ship, there is opportunity to expand and get the job done.

Blank however said they could not wait any longer.

"We really need these vessels to run now, because now is when the peak season starts so we don't have time to wait," she said.

New Zealand Shipping Federation executive director Annabel Young said the government had made it difficult for local ships to compete, as international vessels had been given a huge advantage.

Young said she feared for what might happen in the future if international shipping companies continued to dominate the market.

"What happens the day that there are no local ships and you're reliant on international ships? I can tell you that the answer will be that the price will go up, and there may even be situations where there's routes that are just not serviced," she said.

The majority of New Zealand exports - 99 percent - are sent by sea and are worth $82 billion to the economy annually.