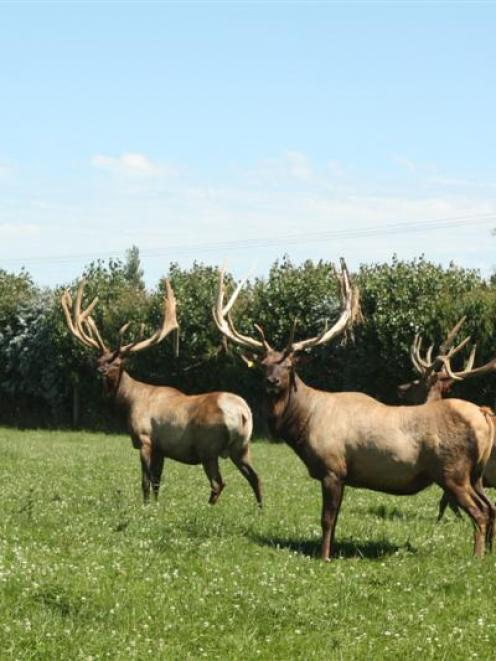 How it gets there now occupies less of his time than it once did.

Like other southern elk farmers, Mr May, who has been raising elk and cross-bred elk-red deer (known as wapiti) for more than 30 years, used to have his animals killed for local consumption and for export.

But meat processors paid about $1 less per kilo for heavyweight elk carcasses than for lightweight deer, because smaller cuts of meat were what the market wanted.

Processed meat was also sent to Auckland to be sold through an export agent, a marketing strategy Mr May said was a ''minefield'' financially.

''Meat had to be exported by the container load, and it took meat from about 250 elk to fill each container. That is a lot of elk.

''By the time the expenses were deducted, we were receiving minimal returns.''

About eight years ago, Mr May and a group of businessmen set up New Zealand Elk Ltd to market meat under the brand name Elk Supreme. Their aim was to raise the profile of elk as a niche market gourmet meat, put their own agent on the road in Europe and deal directly with the buyers.

Then came another change of tack.

Mr May and three others approached Clover Exports, in Gore, which was already processing large animals, such as horses, and exporting the meat to the European market through its Australian owners Meramist and its Belgian parent company Benimpex Nv.

After negotiations, the quartet put about $100,000 into a dedicated venison slaughter and processing chain at the plant in 2006.

In the first killing season 1200 elk were processed, increasing to 2800 the following year.

In the first few years, Mr May was acting as an agent, organising a supply of up to 2400 animals per season for Clover. But he has stepped back from that too, leaving others to deal directly with Clover and concentrating on running his own 120ha farm, where he raises about 700 animals annually and kills about 300.

While elk is not marketed as a niche product, as the group first hoped, Mr May says in all other respects, dealing through Clover has been a success for him.

''Exporting is a numbers game, as we discovered, and we do not have large numbers of elk to export ... It comes back to how exposed you want to be. We would have had to take the financial risk to put someone on the road in Europe, and the financial gamble on how much we would have been got for our meat.

''Looking back, we handed things over to Clover at the right time. Who would want to be in it [selling directly] now, with the New Zealand dollar the way it is?''Mr May said financially, the deal with Clover had resulted in elk farmers receiving a better price for their animals - about $7 a kg at present, although the rate varies.

Clover began to pay its suppliers more and other venison processors had done the same.

''Some people said we were mad to invest in Clover's plant ... but we definitely were not. We achieved what we set out to achieve for ourselves and other elk farmers.''