By Jacob McSweeny
0 Comments
A Milton boat company believes it has created a world first with its amphibious boat that can retract a front wheel when it enters the water.

McLay Boats owner Steve McLay said that while amphibious boats were not new, one with electric-powered wheels was something no-one he knew had seen yet.

"So you haven’t got the noise of an engine — which they are quite noisy — within the boat.

"This has a bow door where the wheel totally retracts inside. 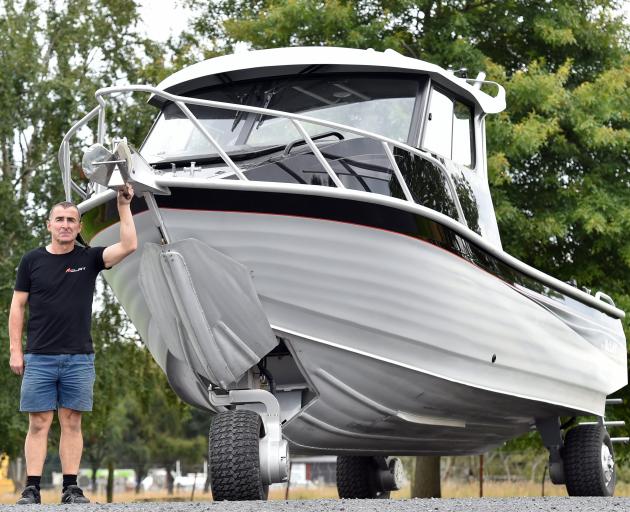 Steve McLay stands next to the Raptor 741 with its wheel and wheel door out and open. PHOTO: PETER MCINTOSH

"That’s never been done in the world before as far as we know. So when it’s on the water ... it just looks like a [normal boat]."

The boats sell for $295,000 and the company has sold two. Mr McLay has kept one for himself to test and check for improvements.

The boat was not made for driving, Mr McLay said, but it would suit short distances. 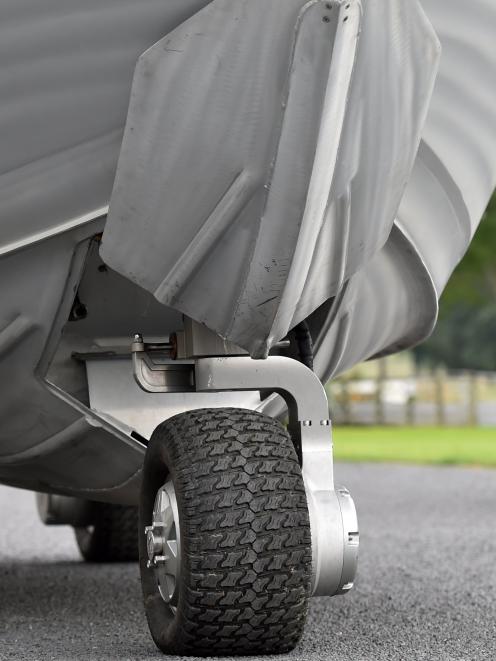 Close-up view of the front wheel and its door. PHOTO: PETER MCINTOSH

"The idea is guys with the baches up north and that sort of thing can simply [go] out the bach, maybe a short bit of road and out to the beach, straight out to sea, no trailer required."

The idea came about a year and a-half ago when wheel company Tectrax approached him.

"They said to me ‘are you interested in getting involved?’ I looked at it ... had a play on their demo boat. They just had a big open bow and I liked the concept, but I said if we’re going to do it we need to be able to close the bow."

After going back and forth with the idea for a while, they made a plan about how it would work.

"[We] made the concept to be a bit more robust and improved it to what it is now."

The back wheels slotted into a wheel cowling — "a big fender type thing".

The company showed the idea off at a boat show last year and it was received well.

"We were overwhelmed with the response of people that thought ‘wow this is just so much better than what they’ve been using in their amphibious [boats].

Mr McLay said it would not be central to the business but it was likely they would build a few every year.

The company was seeking a patent to be able to claim it as a world first, Mr McLay said.

"We are reasonably confident it’s never been done in the world before.

"We’ve applied for patent rights some months ago of the door system and the tracks and how that works and we’ve had no objections of anybody worldwide saying it’s [already] been done."

Mr McLay said the boat was perfect for recreational boating or fishing.

"It gives the customers an amphibious boat without, in my opinion anyway, the ugly looks of wheels hanging off both ends.

"It just makes it so much better for fishing and anchoring because there’s no wheels sticking out that can get caught up with your anchoring line or your fishing rods out the back."