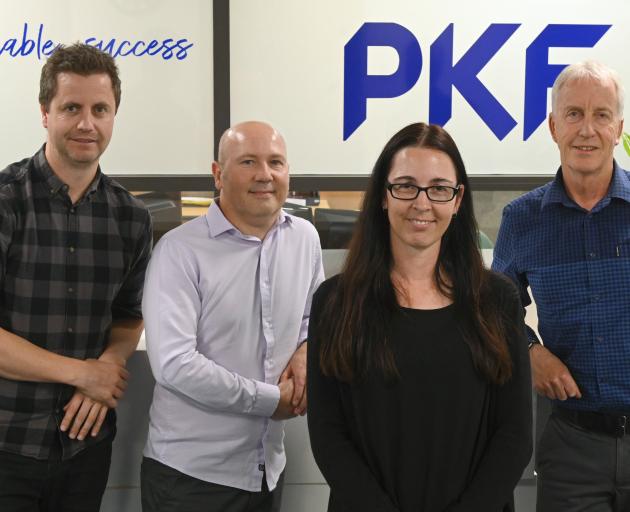 The keen car racing enthusiast is also the first female director of the firm in its 96-year history, something she acknowledged made her feel "very special".

Changes are afoot at the firm as chief executive Jono Bredin is transferring his shareholding to Ms Glover and fellow senior team members Ben McCormack and Howard Tilbury. They will join Peter McCormack as owners on January 1 next year.

After 11 years at the firm, Mr Bredin, a prominent netball umpire and rugby referee, was moving to Hawke’s Bay to be closer to family. He would continue to work remotely for PKF Dunedin as a consultant.

The firm has been in the city since 1925 when it was started by Bill Mitson and it had subsequently gone through various name changes. The newest shareholders were the 11th, 12th and 13th owners in its history.

Peter McCormack, who joined the firm in 1980 — quipping that he had his own abacus after three months — became an owner eight years later.

During his four-decade tenure, the technology changes had been huge while the fundamentals of the business were the same — "we just get there quicker", he said.

Mr McCormack, who is also deputy chairman of the Otago Rugby Football Union, was delighted to have "lots of young blood around" and also the continuity with the involvement of his son who did not initially set out to be an accountant.

Ben McCormack, who grew up in Dunedin, studied physical education at university. But in his last year, he decided he did not want to be a physical education teacher, so he did an accounting degree, started work at PKF in 2005 and "came right through the system from the bottom to where we are now".

He had no regrets about his chosen career, saying he enjoyed the interaction with people. The job was "not just sitting there putting together accounts or counting numbers" and discussing strategies with clients was an area he particularly enjoyed.

Originally from the Bay of Islands, Ms Glover moved to Dunedin in 2007 and joined PKF in 2018. She enjoyed working with clients and helping them with their businesses, along with helping to mentor and grow the staff. PKF Dunedin has a team of 18.

Treasurer of the Otago Sports Car Club, she loved the adrenaline involved in car racing, a sport that she and her partner were both into and able to do together. She raced at Three Mile Hill at the weekend.

Dunedin was a city where she had put down roots.

"It’s an awesome place, I absolutely love it, there’s just so much going on. It’s such a beautiful place and so much to do, so much to explore," she said.

Mr Tilbury, who joined the firm in 2007, has lived in Dunedin most of his life and he also enjoyed the relationship side of his job. It was important to see clients regularly — "not just to sign off tax returns" — and he enjoyed working with "a really good team of accountants — with personality".

"While we do all the basics and stuff you expect from accountants, it’s the relationship side of working with colleagues and clients that makes it rewarding."

Covid-19 had reinforced the importance of service and relationships were so important to clients. The shareholders were "in it doing the work" too — "no-one’s really a boss just sitting there telling people what to do", he said.

Ms Glover said the new owners were used to working together and got on well. They knew each other’s strengths and "it just works", she said.

The wider team was also excited about a fresh and new approach. The new owners wanted to continue growing the business, focusing on the family side of it — "that’s pretty special to us" — and developing the team, she said.

"Jono and Peter have been running a pretty good business. For us to have an opportunity to take it over and grow it even more is a pretty good place for us to start at and continue on," she said.

They were all actively involved in the community and giving back to community groups was something that was important to them, Ms Glover said.