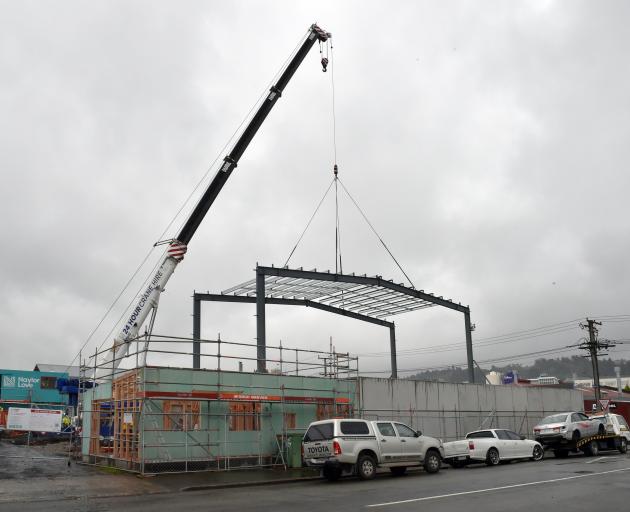 A crane supports a frame in place at a construction site in Ward St, Dunedin. Allied Pickfords will move in after the construction work is completed in December. PHOTO: GREGOR RICHARDSON
It will take a moment for Allied Pickfords staff to remember their new site will be in Ward St, having spent more than a decade at their previous site in Wharf St.

Their new warehouse is going up where Rainbow Paints used to operate and the moving and storage company expects to move there in January next year after the building is completed in December.

Allied Pickfords Dunedin franchise owner Simon Hall said they had been at their previous site for 15 years.

Access was difficult exiting that premises on to Wharf St and they were sharing the building there.

Mr Hall said Ward St was a better location for getting away to key parts of the city, such as Port Chalmers, and they would have the new, purpose-built site to themselves.

It would be a similar space to what they already had but would be designed to cope with their warehousing system, which stacks storage modules inside the building on three levels.

Mr Hall said Allied Pickfords was a domestic and international company that would do removals and storage.

"We do receive a lot of import containers with people’s household effects coming from different parts of the world.

"Often they [customers] might be building a house and they want to store it until a house is finished being built."

They often also stored people’s goods when they were moving house and had sold their previous house before buying a new one.

Mr Hall said they were seeing an increase in people moving into Dunedin from Tauranga and Auckland where they would sell their houses for high prices.