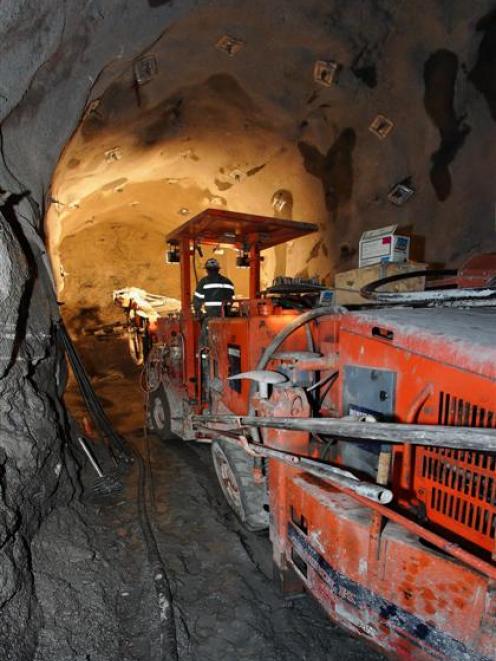 Test drilling around "panel 2" within the underground development is part of a $10 million exploration programme this year to find new estimated resources and convert them into mine reserves, chief executive Steve Orr said in a statement yesterday.

"The [gold] grade tenor of this new zone looks quite promising and we expect that we will add to the underground reserves later this year," Mr Orr said.

Triple-listed Oceana's share price rose 6c to trade at 96c yesterday, at about similar levels to last month after having languished, but gained from 30c a share earlier in the year as the strength of the New Zealand gold price rose with a weakening kiwi by almost 30%.

Information to date indicated the panel 2 gold grades were higher than those in the present Frasers underground, commissioned last year, and more test drilling was planned during the year, Mr Orr said.

The $70 million Frasers underground development will eventually have 21km of tunnels around its main 3.5km decline and contribute to Oceana's forecast 280,000-300,000 ounces of gold production this calendar year, which is also sourced from open pits at Macraes and in Reefton on the West Coast.

Drill holes, both from the surface and from inside the Frasers underground tunnel, returned average grades of 7.2 grammes of gold per tonne, with the intercepts of mineralisation ranging from 2m to 27m thick.

Oceana is still seeking refinancing of about $US200 million ($NZ353.2 million) for its mothballed gold/copper development in the Philippines where it has spent about $US120 million to date.