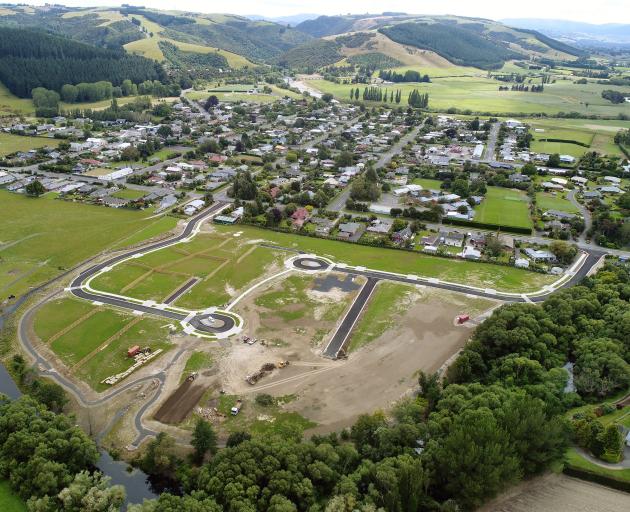 All 35 sections at the Maungatua view subdivision at Outram are either sold or on hold. PHOTO: STEPHEN JAQUIERY
A planned new subdivision in Outram is a case of contractor turned developer for Kelvin Read.

The founder of KB Contractors, along with fellow owner Brent Reid, has recently developed 35 sections and sold 29 of them, with the sale of the remaining six a formality.

The pair developed and sold the sections under the company name of Formby Holdings.

The sections, most of which are about 1000sq m, went off the market about three months ago.

Along with the sale of 24 sections at Scroggs Hill in Brighton, the sale of the Outram sections shows an intensifying demand for land in the wider Dunedin area.

"There was such a demand for them ... they just sold themselves," said Kelvin Read.

Six of the lots were taken off the market until the titles were due, expected to be in March this year, Mr Read said.

The sections took six months to sell and, given there was no publicity around them, Mr Read was surprised by how quickly word got around.

"It just trickled through, people rang and said ‘I want that section’ ... end of story.

"We never marketed them or anything."

Mr Read said he wanted local buyers, but the land attracted buyers from as far as Canterbury and the North Island.

"We’ll give them [Outram residents] first crack, I suppose you could say.

"There has been quite a few outsiders come. People have relocated from the North Island and Canterbury areas. [It has] just that little, country feel to it."

He expected the demand was because the land would be easy to build on and was "a real clean, tidy subdivision".

"Pristine property like that, and tucked away, is going to be a bit harder to come by in the future."

It is Mr Read and Mr Reid’s first attempt at developing and selling a subdivision, as the KB Contractors owners are usually working for developers.

"We’ve been involved with so many subdivisions and we’ve picked up all the good points and the bad points from them all.

"We decided there’s no asphalt footpaths, there’s no boxing anywhere. It’s all concrete nibbed and cobblestoned and paving stones.

"We didn’t want a rubbishy subdivision, we went all out for quality."

KB Contractors carried out much of the contract for the new Highland Park subdivision, which contained about 275 lots, in Mosgiel.

Mr Read said the lots were a solid investment in a buoyant market.

"People will make money, there’s no doubt about that.

"Especially the people who got in early on the sections. They’ll do very well.

"Not a lot of them are land banking or any of that, or just building to profit. A lot of them have just taken the idea ‘this is my final house, this is where I want to live’.

Cadbury owner back in black, but Covid cautious