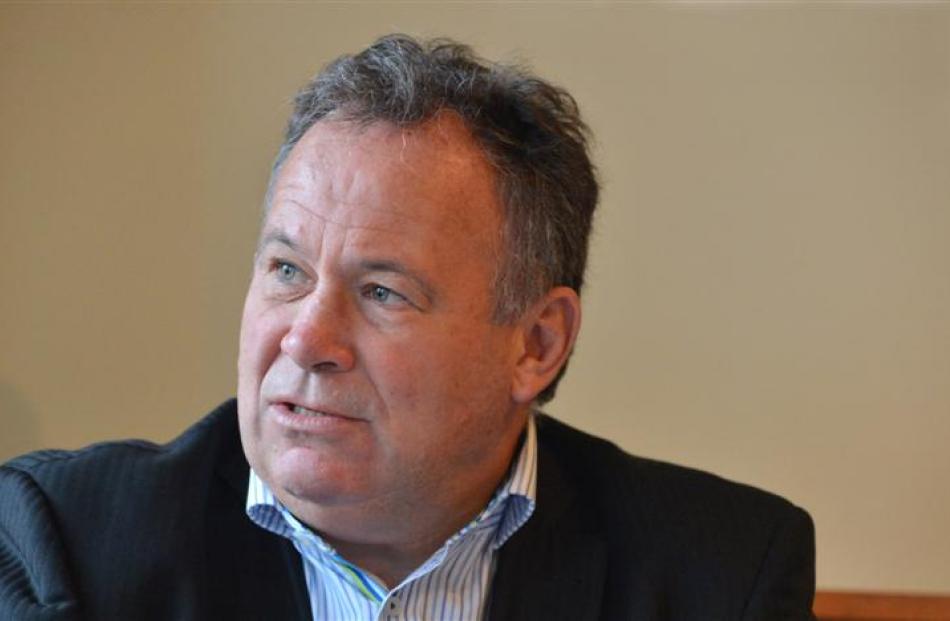 Telecommunications continues to create headlines in New Zealand with debates over copper, the cloud and regulation. This week, Chorus chief executive Mark Ratcliffe was in town and took time out to talk to Business editor Dene Mackenzie.

Chorus chief executive Mark Ratcliffe spent a busy day in Dunedin this week, starting with a breakfast meeting contractors and ending with a visit to the Dunedin City Council to talk about fibre and broadband.

If the stress of dealing with the Government's large ultrafast broadband (UFB) build, plus appearing in front of the Commerce Commission, was getting to him, it was not showing.

One of the first things Mr Ratcliffe (56) wanted to focus on in an interview was the increased number of New Zealanders who were becoming owners of Chorus now it was separated from Telecom and trading as its own entity on the NZX.

Latest statistics showed that 55% of shareholders were New Zealanders, up from 30% 18 months ago. Chorus had institutional investors on its books, along with ACC, and it was possible that many New Zealanders had a stake in the infrastructure company without being aware of it, he said.

''For those who say that local infrastructure companies should be owned by locals - we are living the dream. When decisions are being made about our future, it is New Zealanders who are affected the most, not overseas investors. Regulation decisions have the potential to hurt the people who are our investors.''

Mr Ratcliffe recently appeared at a Commerce Commission hearing which was considering what price should be charged for access to the Chorus copper network. It is fair to say Mr Ratcliffe and the commission are some way apart on what the price should be.

Asked how much time he spent on responding to commission papers, Mr Ratcliffe said it ''way too much time'' but because it had the most potential to add or destroy value for shareholders, he was sure shareholders expected him to spend a lot on getting a result.

''We will always have regulation. We are an infrastructure company and the only game in town.''

However, every network provider had access to the copper network, at the same access price, no matter what their size, he said.

The problem as he saw it was the Government wanted to create value from the fibre being introduced throughout New Zealand. Companies were spending too much time thinking about copper pricing rather than content being delivered over fibre.

Broadband had been affordable in New Zealand for a long time, Mr Ratcliffe said. About 60% of the population had access to high-performance broadband and in the past two or three years, New Zealand had had some of the fastest take-up of broadband around the world.

Fibre would allow businesses and services, such as health and education, to add significant value through the amounts of data that could be quickly downloaded or sent.

Chorus had laid fibre-optic cable past a ''significant number'' of New Zealand schools but Mr Ratcliffe expressed disappointment about the slow take-up of fibre by those schools. However, he was confident that once the Ministry of Education had implemented its broadband programme, schools would start signing on.

''Once you have schools on fibre, the children will say to their parents they want it in their home. With a 100Mb per second at school, why not at home?''The same happened when schools first used ADSL broadband when parents were using dial-up, he said. Once children started complaining about not being able to do their homework on dial-up, broadband uptake increased.

''We will see the same dynamics playing out again.''

Many people now accessed the internet through three devices, a phone, a PC and something like a tablet, Mr Ratcliffe said.

In New Zealand, there were 500,000 ''smart TVs'' but very few of them were connected to the internet. When fibre was installed into a home, it was usually connected to the television and wi-fi was used to connect other devices in the home.

''You can sit in your lounge and multi-task,'' he said.

Asked how he kept up with the changing trends in technology, Mr Ratcliffe said he thought he was ''up with the play'' until his children came home from university and asked if he had tried various applications.

''Have you tried Spotify,'' he asked this reporter. Well actually, my children had got me into the radio streaming app sometime ago, I replied.

''Once you start looking for content, there is much more than people realise. It just doesn't get packaged up in the same way as it used to,'' Mr Ratcliffe said.

While in Dunedin, Mr Ratcliffe met 130 local contractors from Downer who were working for Chorus. He also met local retail investors, something that does not happen in the city regularly.

One of the important stops was to Dunedin Mayor Dave Cull and Dunedin City Council chief executive Paul Orders. Councils had a large role to play in the take-up of broadband. With councils such as Dunedin wanting to attract people to the city to work and live, having good broadband was a selling point.

Dunedin was off to a ''great start'' for the UFB project. The national project was nearing the end of the second year of a planned eight-year programme with Dunedin more than a quarter of the way through the build, he said.