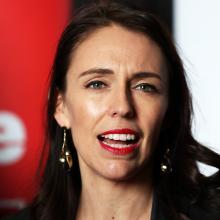 Jacinda Ardern
Prime Minister Jacinda Ardern says she was talking about one thing and Newstalk ZB host Mike Hosking another when said she was "pretty pleased" when asked about GDP growth this morning.

Ardern had been asked about the gross domestic product figures ahead of Thursday's official release of the second-quarter economic data and said she had received a "hint".

A spokesman said afterwards that she had been referring to the Government's June year financial statements and had "made a mistake".

The New Zealand dollar lifted to 65.84 US cents from 65.78 US cents following her comments.

Ardern told reporters later this morning she had been "obviously" referring to unaudited financial accounts.

She denied she was confused. "I know what I was talking about. Unfortunately the question I was being asked was something else."

Ardern told NewstalkZB she'd been given "a hint" and "I am very pleased with the way we are tracking."

Finance Minister Grant Robertson said the Government got no preview of GDP figures.

"She was speaking about the unaudited Government financial statements for the year to June," he told reporters.

Robertson said he was not concerned that the dollar had been affected by the Prime Minister's comments.

"These figures really matter. They're arguably, if not the most important, certainly up there for New Zealand," he said.

The GDP data, due Thursday, will come under particular scrutiny after the central bank last month kept the official cash rate at 1.75 per cent and pushed out the timing of the first rate hike citing weak growth as a concern.

Economists are expecting the data to show GDP expanded 0.8%  from the first quarter and 2.5% from a year ago, according to a Bloomberg poll of 16.

But both ASB and Westpac were more positive 0.9% growth in the second quarter - a big bounce back from 0.5 in the first quarter.

The central bank is tipping growth of 0.5%.

Reserve Bank Governor Adrian Orr reiterated that "the direction of our next OCR move could be up or down".

Stronger than expected GDP growth would quell any market expectations of a rate cut. Market pricing for a rate cut also dipped to 44% from 50% before Ardern's comments.

'NO HINTS TO ANYONE'

Government Statistician Liz MacPherson came out swinging today at the suggestion that anyone - even the Prime Minister - is given a sneak preview into data such as quarterly GDP reports.

"There are 'absolutely not' any hints to anyone, including the Prime Minister, before the release of economic growth figures from Stats NZ," she said.

"Stats NZ has strict embargo rules about tier-one statistics such as gross domestic product. These figures are market sensitive and are never given to anyone in advance of the release day."

There is a short formal briefing for relevant government ministers in the hour before the release time of 10.45am on the day, but that is under strict embargo lock-up conditions, MacPherson said.

"Even then ministers are not allowed to communicate the information to anyone else before 10.45am."

The same is true for other so-called tier-one data including the balance of payments and international investment position, consumers price index, and labour market statistics.

Having heard the interview 'live', it was in quick fire commercial style, or, both speaking at once. Basically, the PM was answering a previous point as M Hosking put this question.