Like many good ideas, Remarkable People spawned from a pub where a couple of mates were ‘‘thinking how we were going to take over the world and all those sorts of things’’.
In previous lives, those who set up the Queenstown-founded recruitment company had employed lots of people, whether through security companies and hospitality businesses, or trade and construction.
They decided to take what they had learned in those businesses — instead of keeping it just confined to a small market — and do it in a general market. 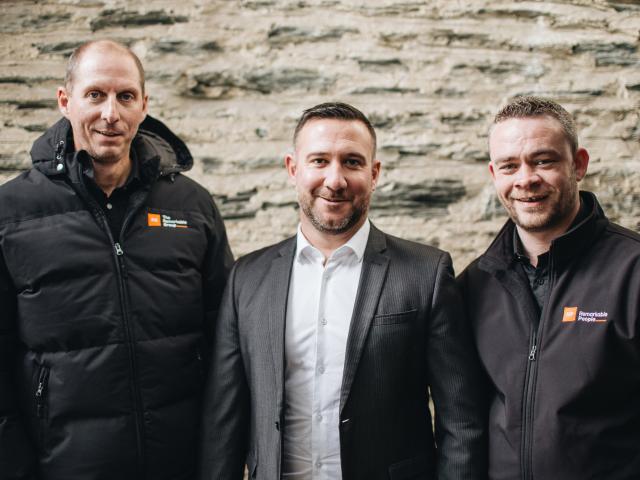 A remarkable success ... Blair McNaughton (left), Edward Stott and Patrick O’Regan from Queenstown-founded recruitment company Remarkable People. PHOTO: SUPPLIED
Remarkable Labour, as it was initially known, started in Queenstown in 2016.
It went well and, after about a year, it was decided to expand ‘‘from the bottom of the country up, rather than the other way most people do’’, Remarkable Group managing director Blair McNaughton said.
Earlier this year, the name was changed to Remarkable People. Founded traditionally in trades and construction, they discovered a lot of their clients had other needs to fill, outside of those industries, so Remarkable People fitted more what it did.
It now had 10 offices around the country and supplied staff nationwide, from permanent and temporary to contract staff, placing everyone from qualified accountants to somebody needing a labourer on a site for a few hours. Staff were also supplied in Australia and a new joint venture in Sydney would open up Remarkable People Australia.
Remarkable People was placed 28th on the Deloitte Fast 50 index and, while it had ‘‘definitely been a good ride’’, there had also been bumps along the road, Mr McNaughton said.
It had been a ‘‘pretty challenging’’ two years for the business; the first Covid-19 lockdown saw turnover quickly plummet but it identified which industries were classed as essential and could keep operating. It managed to redeploy staff into those roles, connections in the security industry also helped, and got turnover back to 30%-40% from where it was.
Things like the Government wage subsidy meant they managed to keep 95% of staff on board during that period. So when they could ramp back up, they could do that ‘‘pretty quickly’’.
The experience had taught a few lessons in business about resilience and making sure there was cash in the bank. The Auckland team was  getting busier than ever.
‘‘This has shown to us to not ever sit on our laurels ... constantly keep developing,’’ Mr NcNaughton said.
It was looking at things like online and app options to see where to pivot to next. It had been ‘‘good fun’’ and they had a good team, some who had been with them from the start.
‘‘We’re young, we’re hungry, we’re hopefully a fun place to work.’’
Mr McNaughton came to Queenstown in 2002 to go skiing for a season while business partner Edward Stott came over from the UK 10 to do an OE and they met while working for Allied Security. Neither had left the resort.
It had been both fun and exciting with no two days the same. There had been little time to reflect on the business’ success and so things like the Deloitte acknowledgement made a good time to pause to acknowledge having done a good job,  he  said.
He had friends in Queenstown who owned hospitality and tourism businesses and had seen their struggles during Covid-19.
‘‘To have a few success stories out of Queenstown is probably not a bad thing,’’ he said.
Out of adversity came an opportunity to ‘‘put your thinking cap on and see what you can do’’, he said.
It was sad to see Queenstown at the moment — definitely the quietest he had ever seen it — as he described it as like tumbleweeds blowing down the streets, but he remained optimistic.
‘‘It’ll come back, Queenstown’s always going to be here, it’s always going to be beautiful, people are always going to come visit,’’ he said.
Comment now