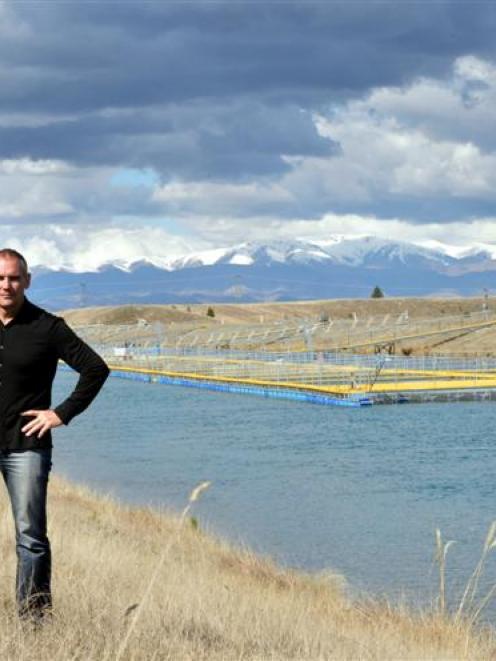 At Mount Cook Alpine Salmon, in the heart of the picturesque Mackenzie Basin, there's "no standing still, no time to suck a breath or have a cup of tea".

"This thing's trucking along," chief executive Geoff Matthews declared enthusiastically, while outlining progress on the $20 million expansion the company is more than halfway through.

In three years, staff have been asked to manage 10 times the number of fish and there are about a million salmon now in the water, destined in the main for the top-end market in the United States. 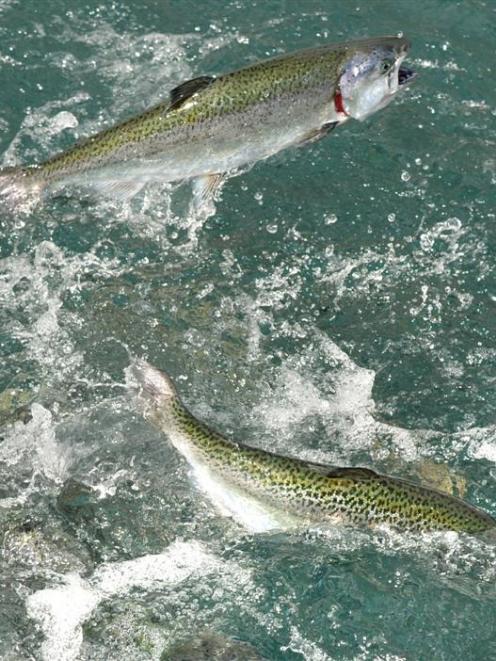 Feeding time at the salmon farm. Photos by Stephen Jaquiery.
In the past year, a new fish farm was established in the Ohau hydro canal, near Twizel, while a new fish-processing factory has been proposed for a location yet to be confirmed in South Canterbury.

The pace of change was "really quite stunning", Mr Matthews said.

In the early 1990s, a trial salmon farm raft was established by Southern Sockeye Salmon Ltd in the Ohau canal.

In 1995, the farm moved to the Tekapo canal, which made it the highest salmon farm site in the world at 677m above sea level.

Mr Matthews' involvement began when he was asked to do some work for the company in 2004-05 through his own branding and marketing company.

As part of that work, he travelled to the Middle East to help sell salmon and he discovered it was the "finest salmon in the world".

But the problem was the company was not producing enough to meaningfully export.

In 2009, Mr Matthews decided to put a consortium together to buy the company.

The global financial crisis hit at the same time as he was trying to raise the cash, but he eventually got some passionate investors.

A new name and new ownership signalled a new era for the company. From the start, there was a vision to get to a profitable size.

"We had to be able to farm, process and sell at the very top end of the market," he said.

The company has gone from 13 employees to 37 and, by this time next year, there could be close to 50 staff and it was likely to be the largest single employer in the area.

The planned processing factory would employ 80 people once up to speed and it was hoped to have that operational by the middle of next year.

The salmon-farming industry could be worth $100 million to the region "in the next decade or so", Mr Matthews said.

The United States was the major market for the company at the moment - "if you go to the US, we're getting the highest price for farmed salmon in the world" - and it would take everything the company could produce.

Production had to increase before export markets in Australia, Singapore, Hong Kong and Europe could be opened up, but those markets were ready to go - they were just waiting for fish.

The company had consents for about 2500 tonnes of salmon.

When it took over the farm, it was doing about 120 tonnes. This coming year, about 700 tonnes will be harvested.

Asked what made Mount Cook Alpine Salmon so special, Mr Matthew said the water was the key - along with the volume and the speed of it.

The salmon basically spent their lives swimming at 5kmh against a current in pure glacial water.

And the water had been tested and met drinking water standards after it came out of the farm.

That, in itself, was "a great story for the rest of the world".

One of the reasons the salmon commanded a good price was it was being sustainably farmed, he said.

But even at full production, the company would still be producing volumes amounting to "a drop in the ocean" and Mr Matthews described it as a "little niche player".

It might only be a small player in the international scene, but its product was being served at some of the world's finest restaurants, including the French Laundry, in the Napa Valley in California, which has been named the best restaurant of the world.

However, the pace at which the company was growing meant issues were inevitable. Staff had to change the way they operated, deal with the 10-fold increase in fish being managed, while timely capital investment was always an issue, he said.

Used to being his own boss, Mr Matthews had to learn how to be "a good CEO".

"People do look to you for confidence, for drive and for vision. Personally, it's been a great learning curve," he said.

There were fewer day-to-day challenges than in agricultural farming - the weather was not an issue - and it was probably the best aquaculture environment in the world to farm in.

New Zealand's aquaculture products were "fantastic" and a challenge for the whole industry was how to "get top dollar" and increase offshore markets. He believed good marketers in that area were lacking.

There were not many chief executives who came from marketing and branding backgrounds.

The whole company had become infused with marketing and branding. Everything it did represented the company as a brand, he said.

Staff all knew they were part of the brand delivery and what they did directly affected the brand's perception in the US, he said.

Selling the salmon at a commodity price would "just be a total waste". It could be seen as the company's duty to make sure it was sold at the top level, he said.

New Zealand needed another one hundred $100 million enterprises just to keep pace with Australia over the next 20 years.

Ultimately, that was going to come from using natural resources in a sustainable way to generate premium products which were sold at the very top end of the market.

There were now more than 60 investors in the company and the board was chaired by former prime minister Jim Bolger.

As minister of fisheries Mr Bolger had licensed salmon farming in New Zealand.

He was also prime minister when the government granted the first leases to farm salmon in the hydro canals in 1991, through the Electricity Corporation of New Zealand Ltd (ECNZ), now Meridian Energy.

Mr Matthews approached him to become chairman and it was a "coup" to have him join the board, he said.

Mr Matthews himself was passionate about the product and the region "and what we're doing here".

Having been a world-class Ironman athlete, he likened it to being halfway through a marathon.

But being able to help turn a business into a $200 million enterprise was "kind of cool".

The jobs it provided helped retain the likes of schools and medical services in the district.

To be successful, the company had to be a leader in the community. When it came to establishing a new fish farm, it volunteered to establish toilets and car parking for fishing enthusiasts.

There was "great fishing", as the 36,000 salmon smolt released two years ago in conjunction with Fish and Game were now "ready to eat".