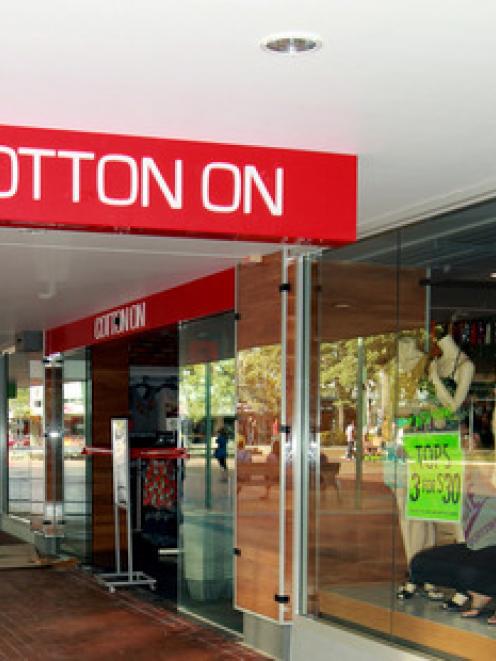 Cotton On. File Photo by NZ Herald.
Staff at fashion chain Cotton On are facing the possibility of working without tea and meal breaks after a last minute claim in collective agreement negotiations.

It follows the introduction in October last year of a law that took away the legal right to a tea break. The Employment Relations Amendment Bill also weakened collective bargaining.

Labour spokesman Iain Lees-Galloway told Newstalk ZB the bill was being used against its proposed purpose.

"This was sold to us as something that was going to be important for small businesses and for workplaces where the work flows are unpredictable."

Cotton On workers had a predictable work-flow as part of large corporation, Mr Lees-Galloway said, and the company was trying to "pare back" its employees' work conditions.

"I think other corporates will be watching this to see if they're successful and if they are we could see a lot of claims like this."

Business New Zealand manager of employment relations policy Paul Mckay said the law did not prevent workers from taking lunch breaks at a time negotiated by the employer and worker.

"It's not a case of no breaks, it's a case of working out when those breaks can be taken."

He said workers who finish their shift without taking breaks were then entitled to compensation, he said.

"The Prime Minister reassured New Zealanders that 'post the passing of this law, will you all of a sudden find thousands of workers who are denied having a tea break? The answer is absolutely not'. We now know the Prime Minister's assurance was misleading," Mr Reid said.

"Cotton On is trying to take advantage of a law that was always meant to strip workers of their rights."

Mr Reid said breaks are crucial on industrial sites because they keep people safe and worker fatigue was a risk at the distribution centre.

"Yet this has not stopped Cotton On trying to exploit the new law to its own advantage. This is what the government always intended, an economy where our competitive advantage is poor working conditions."

Mr Reid vowed that the retail chain's workers and the union would resist the proposed change and that strike action was likely.

Cotton On had not finished bargaining the collective agreement and the outcome would be known once the process was finished.

By Patrice Dougan and Sophie Ryan of NZME. News Service