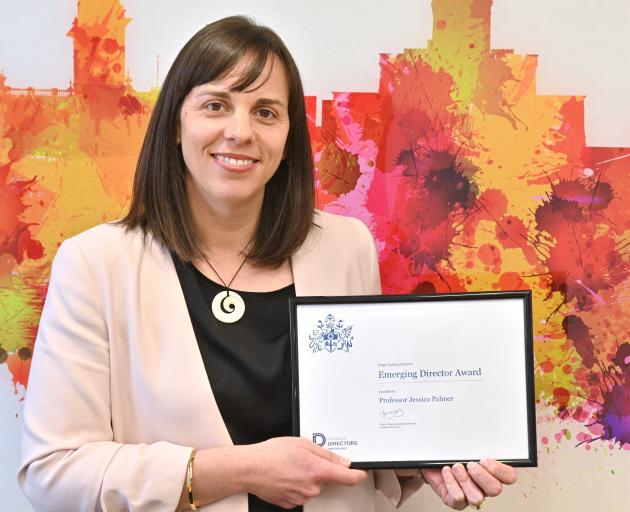 Rather than just an add-on, it was "a really important part of who we are" — and something that she also subscribed to.

Prof Palmer, who is dean of the University of Otago faculty of law, has been named the Institute of Directors Otago Southland branch emerging director for 2020.

The award was established to foster upcoming talent in governance through mentoring, formal training and access to leading speakers at events across the region.

The selection panel said her motivation to pursue a career in governance and her extensive and relevant experience in management and leadership would assist her in future governance roles.

"Jessica clearly gains value from her governance roles and balances the desire to be curious with a patient and common sense approach.

"She has high standards and a sense of responsibility and duty that will serve her well in the future."

Prof Palmer was humbled to receive the award, saying she appreciated the contribution she had made so far had been recognised and the potential in her to move more into governance had also been acknowledged.

Born in the United Kingdom, she came to New Zealand as a baby and her family moved between Auckland and Wellington as her father was an academic.

She came to Dunedin as a "baby" lecturer in 2005 and she loved both the university and the city that was now her home.

While she had done a couple of years in legal practice, she loved the research and teaching side of academia and had no regrets about her career path.

Like many others, Prof Palmer’s foray into governance began through her children’s education, when she was on the board of an early childhood organisation.

Through that process, she realised it was a great way for her to give back to the community, using her legal, organisational and strategic skills — and her time — to make an impact and help out.

It had evolved since then, and she realised that as she was getting better at it, it could be a career development for her.

"It could be the next step," she said.

Prof Palmer loved to stay busy and while life could be a "constant juggle", she did her governance roles because she enjoyed them.

Several of her governance roles were Auckland-based but it was easy to do those from Dunedin, she said.

Good governance required strategic forward thinking and she enjoyed taking a strong collaborative approach to decision-making both in her executive management and governance positions.

"I am a firm believer in the importance of sound governance for organisations in order to ensure the mission of an organisation is achieved, that it is done so sustainably and that staff and customers identify strongly with the organisation and develop a sense of loyalty.

"Knowing that the decisions that I make in my leadership and governance roles affect the experiences of people who interact with the organisations, whether as staff, client or stakeholder, is a powerful motivator for me. It is a privilege and a great responsibility."

Prof Palmer was an advocate for seeing more women on boards, but said it was about diversity in general rather than just gender, ethnicity or occupation.

"We are complicated people, we bring all sorts of different views," she said.

Women tended to approach problems a bit differently and she believed they also cared more about the ways in which they delivered messages — and that could make a real difference to staff or organisations.

As part of her prize, Prof Palmer would receive mentoring with an experienced director for 12 months.

Stephanie Pettigrew, who is a partner at Dunedin law firm Marks & Worth and Presbyterian Support Otago deputy chairwoman, was named runner-up.