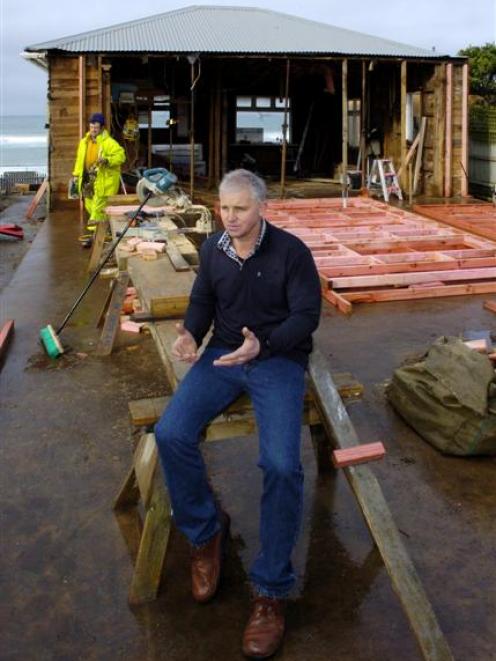 Developer Stephen Chittock with workmen assembling wall framing for a new cafe and bar at the Esplanade, St Clair. Photo by Gerard O'Brien.
Development of the fourth of six potential licensed premises at the St Clair Esplanade is under way, with an estimated $400,000 conversion of a $1.3 million house into a bar and cafe making good progress.

The modest raised beachfront home, owned for decades by the Thomas family, was recently purchased for $1.3 million.

All but its front facade has been demolished for a bar and restaurant development which will eventually seat up to 130 patrons.

Local developer Stephen Chittock has in recent years purchased nine of the 11 residential properties within the Esplanade block and owns the beachfront motels and Mansions apartment block.

Mr Chittock is also in a joint venture development with Calder Stewart and the construction of a 26-room hotel at the southern end of St Clair Esplanade, estimated to be worth $8 million to $9 million by the time it opens in April next year, is well under way.

Tentatively named Swell Cafe, it will be operated by the Chittock family and should be open by October.

It will have seating for 80 indoors, 30 in a courtyard and 20 on a deck with a conservatory area in front of the existing facade.

"Where else are you right there, with views like this of the surf and beach only metres away," Mr Chittock said.

He believes tourism trends indicate more domestic and Australian visitors and St Clair, with its proliferation of bars and restaurants, as well as a spa business, is developing well to capture and share that market.

"We want to see the [Esplanade] block live, and not tied up with flash apartments only for the wealthiest," Mr Chittock said yesterday.

Current licensed premises within the Esplanade block are the Salt bar, Starfish and Esplanade, with a long-standing proposal by a Dunedin restaurateur to build on a vacant block and a bar in Mr Chittock's hotel development set to add to the list.

He said while there were some competing businesses, the wider Esplanade block was developing as a social hub, not only for the community but for visitors to the suburb.