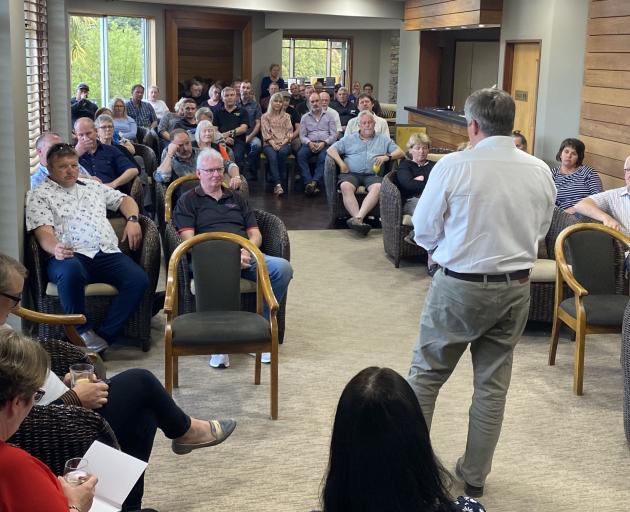 Members of the Fiordland community gathered to discuss the formation of a Fiordland Business Association. PHOTO: SUPPLIED
A lack of tourist income into Fiordland has prompted the local community to seek survival methods ahead of what may prove to be a hard winter.

Organised by Southland District Council deputy mayor Ebel Kremer, a public meeting held on Sunday in Te Anau was to gauge interest in the creation of a Fiordland Business Association.

He said it was a positive meeting with several options expressed by its more than 60 attendees.

These included implementing a new marketing approach to encourage Te Anau, where many businesses were based, to be viewed as a destination.

He called Te Anau a "forgotten town", in that many visitors might visit while based in Queenstown, but had not realised what the township had to offer before visiting.

While the summer was anticipated not to be good, but reasonable, the real effects would be seen next winter, he said.

"If they [businesses] don’t have a reasonable income between now and February, they don’t have any reserves for a potentially lean winter."

He said the association would be a single voice expressing community and local business concerns to local and central government.

About seven people came up to him after the meeting to say they would be interested in the proposed association.

Southland Chamber of Commerce representatives were also present to provide information on how they would work with the association.

"It was a much bigger turnout than I expected, which shows the level of concern they have for the Fiordland business community."

She said the chamber attended to hear what local business owners needed, and was happy to support the next chosen steps.

What those would be would be up to business owners — "it has to have buy-in and be community-led".

Next, the chamber would survey the businesses and get data to provide them with direction.