By Riley Kennedy
0 Comments
‘‘They've tried to make it one-size-fits-all but that is not the case.’’

Cafe owner Leo Rojas was talking about the new rules for the third round of the wage subsidy scheme which he believed had created an ‘‘uneven playing field’’.

The scheme was revived last month following the Covid-19 outbreak and subsequent lockdown.

It was only available in two-week blocks and businesses had to reapply each time. 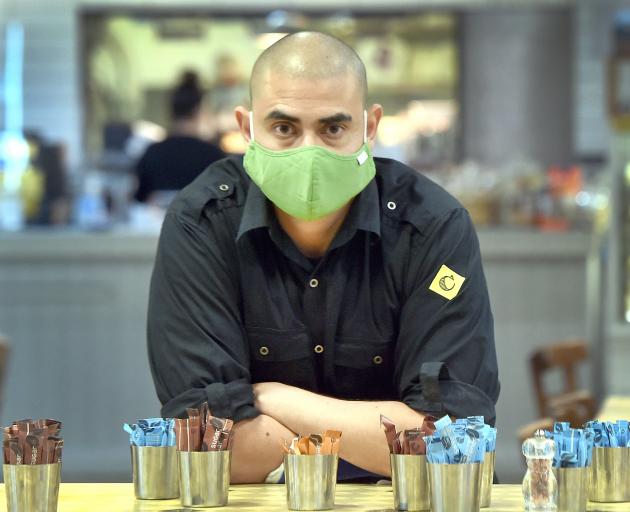 Cafe owner Leo Rojas cannot apply for the third round of the Covid-19 wage subsidy despite still being heavily restricted by Alert Level 2. PHOTO: PETER MCINTOSH

In the first two rounds, businesses could apply if they had a 30% drop in revenue because of the lockdown throughout the country.

For the third round, which opened on September 17, businesses now needed to justify how Auckland remaining in Alert Level 3 or 4 directly affected them and have a 40% decline in revenue.

That meant businesses, such as hospitality, which did not directly rely on Auckland for trade but were still heavily restricted by Alert Level 2, were no longer eligible.

Mr Rojas’ businesses were affected; he owned two Columbus Coffee franchises, one in Dunedin and the other in Wanaka, employing about 30 staff across the two sites.

The Dunedin cafe could seat about 150 customers but it had only been allowed to seat 50 — losing two-thirds of his business. It was the same situation at the Wanaka cafe.

Mr Rojas believed that though the South Island was not dealing directly with the outbreak, it was still having an impact on southern businesses.

‘‘They [the Ministry of Social Development] are looking at the whole of New Zealand as just Auckland,’’ he said.

The two cafes did not reopen under Level 3 because they were inside Mitre 10, and the wage subsidy had been a ‘‘massive help’’ through that time.

But now they had reopened under Level 2, staff were having to cut their hours back from 40 to 32, meaning they were missing up to $200 in wages each week.

If the businesses could get the wage subsidy, it would mean they would be able to get the full amount.

‘‘Their [staff’s] biggest concern was that they had bills to pay and commitments they had made around those 40 hours and we totally understand that ... so if we could get the subsidy we would be able to top them up with that extra eight hours from the Government,’’ he said.

Mr Rojas had worked with staff before the lockdown and had been ‘‘very open’’ with them about the businesses’ financial position because ‘‘they are the business as well’’.

Otago Southland Employers’ Association senior solicitor David Browne said the new rules made it ‘‘very difficult if not impossible’’ for businesses not directly affected by Auckland.

‘‘Businesses had a good July, bad August and are feeling optimistic about September but this does not help,’’ he said.

When contacted, Ministry of Social Development centralised services general manager Jason Dwen said in a statement that it was up to businesses to determine whether they could apply, based on their circumstances.

The third round of wage subsidy closes on September 30.