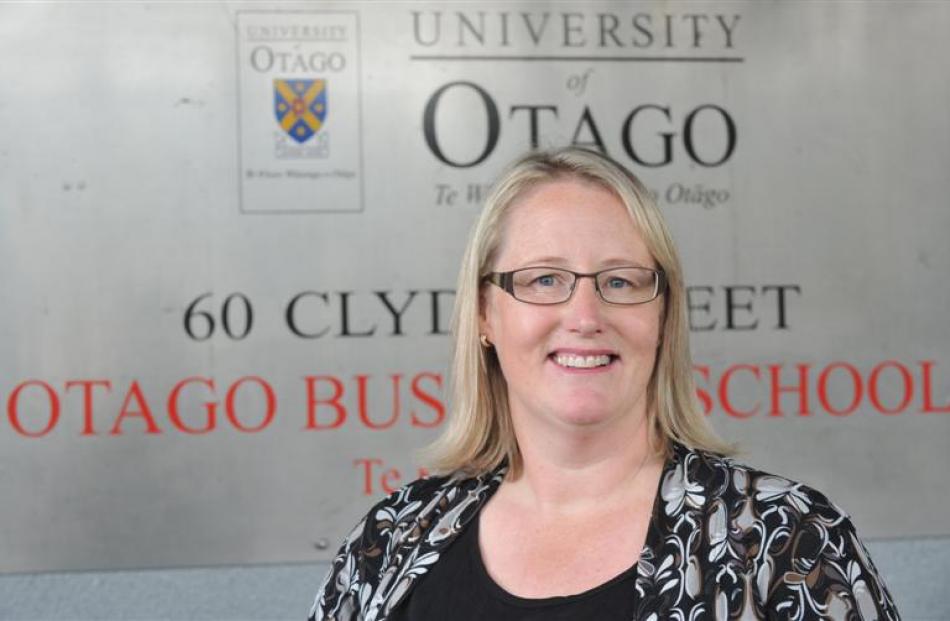 Jodyanne Kirkwood has been researching the effect of Tall Poppy Syndrome on entrepreneurs. Photo by Gregor Richardson.

Jodyanne Kirkwood had never really thought about Tall Poppy Syndrome and its effect on entrepreneurs until she started her PhD.

Her topic was around motivations for becoming an entrepreneur and the subject kept cropping up during interviews, something she was not expecting.

It has subsequently led to a study on Tall Poppy Syndrome (TPS) and how it affected New Zealand business owners.

A senior lecturer at the University of Otago, who taught in the area of entrepreneurship, Dr Kirkwood said it had been ''super interesting''.

Sixty-five entrepreneurs were initially interviewed and all but one had heard about TPS and believed it existed in New Zealand. One-third believed they were affected by it.

The next phase involved interviews with 13 high-profile entrepreneurs or retired entrepreneurs, who were not ''under the radar'' as the majority of the previous participants were.

Most of those entrepreneurs believed TPS did exist in New Zealand but it was not overly concerning to them. Many of the comments entrepreneurs got were positive and congratulatory, but there was a minority of negativity directed at them, a report by Dr Kirkwood, as principal researcher, and associate researcher, Dr Tarja Viitanen, said.

There was a perception people did not want entrepreneurs to fail, but there was a ''degree of glee'' when they made mistakes.

Generally, many New Zealanders were not forthcoming in recognising the hard work and risk entrepreneurs took over a long period in order to be successful.

It appeared to be a lot easier to deflect comments from strangers than people who they knew personally, the report said.

Generally, the detractors were seen as possibly those who operated under a ''glass-half-empty'' approach to life, whereby entrepreneurs were the opposite and described themselves as being ''glass-half-full'' people.

Generally, those entrepreneurs paid little attention to TPS and considered it to be ''part and parcel'' of having a high profile as an entrepreneur in New Zealand.

''TPS is seen as a nuisance but many of the roots behind TPS are actually what we love about New Zealand - its egalitarian culture.''

Some entrepreneurs believed it was improving over time which was a move in the right direction.

Most felt there was little that could be done to prevent it occurring but some steps could be taken to minimise its effects, including. -Being aware it existed,celebrating entrepreneurial success,networking with other entrepreneurs,having a mentor,talking in schools and to groups to educate them about what entrepreneurs really do, and profiling more entrepreneurs in the media, emphasising their success has not been an ''overnight sensation'' but often many years of hard work, business failures and mis-steps before getting it right. From the previous work on TPS, there were concerns it might be affecting New Zealand's economy, but after completing the most recent interviews, it appeared there might not be a dire impact on those businesses or the economy.

However, it had an impact on New Zealand society as a whole which might be concerning, the report said.

They employed many people, but their impact on the economy was much larger, given their investments in other companies (particularly start-ups), charitable trusts and those who benefited from those charities.

They tended to do a great deal of charity and pro bono work or have their own charitable trust alongside their business.

Many actively contributed to the entrepreneurial ecosystem in New Zealand, such as voluntary participation in events such as Start-Up weekends, business plan competitions, and speaking at various entrepreneurial events, and writing blogs and articles on entrepreneurship.

Some of the entrepreneurs mentioned possibly withdrawing their support from charity work as a side effect of experiencing TPS. There was a sense of ''why bother'' if they were going to field negativity from trying to help others.

The community and the country could miss out on the breadth and depth of their skills and knowledge if they did withdraw their support and that was concerning, Dr Kirkwood said.

The next step in the research would be a large-scale survey of New Zealand business owners. The study would be extended beyond founders of businesses to those that had purchased or inherited a business.

The survey would extend the Tall Poppy research plus look at other issues and challenges they were facing. There were also plans to extend the study to others, such as sports players, media personalities, and those in creative industries.