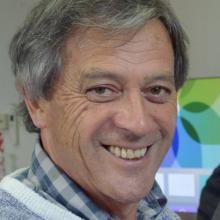 Ian Taylor
Innovative Dunedin company ARL is poised to significantly expand its research and development operations, thanks to a North Island iwi’s decision to take a 40% stake in the business.

ARL has a global reputation for its revolutionary ways of covering sport, particularly golf and America’s Cup yachting. Cricket has  been another sport where ARL has shone.

ARL managing director Ian Taylor has plans for further expansion into the United States through Fox.

Ngati Kahungunu Iwi Inc is taking the multimillion 40% stake for a "significant" amount of money, he told the Otago Daily Times.

Mr Taylor would not release the exact amount of money the iwi was investing.

He was "particularly proud" the investment was coming from his own iwi on the eastern coast of the North Island.  All of the money would be spent on R&D, he said.

"I am not taking any money out. I am not racing to find an exit. We are establishing an R&D division inside here," he said, indicating the Dowling St headquarters for ARL.

"This is my iwi. They are really proud of what I’ve done and I am proud of them."

The investment from the iwi came about through ARL’s development, with the Methodist Mission, of a numeracy and literacy programme. Mr Taylor regularly attended iwi gatherings and spoke to the iwi about the  programme.

Ngati Kahungunu chairman Ngahiwi Tomoana was impressed by what he heard.

He told Mr Taylor: "This is about our people. We’re in."

From there, phone conversations and text messages between Messrs Taylor and Tomoana sealed the deal.

A heads of agreement was finally drawn up and signed earlier this week.

The chance to develop more products and services without the constant worry of having to pay the bills was uplifting, Mr Taylor said.

"We at ARL don’t have access to R&D funds. We have to build it, trial it, test it, analyse the data to back it up, and no-one wants to pay or invest until we are that far along.

"What we do today has social returns in the future — when we get it on to the market."

ARL also developed a 360-VR (virtual reality) for the Canterbury District Health Board to remove the fear of MRI scans for young children, he said.

The children were going through the scanners without drugs or counselling after using the ARL technology.

"We knew it’s good but we had to  take a team away to work on it. Now, we don’t have to worry about the bills."

The first focus with Ngati Kahungunu would be the literacy and numeracy programme in prisons.

Mr Tomoana believed it would be a fast return on an investment for young Maori to come out of prison able to read and write.

However,  Messrs Taylor and Tomoana were ambitious for the investment to work in wider ways and it was important any developments had to be for the good of people.

"It just has to be about good, it just has to be. There is $40billion to $50billion in the Maori economy and the bulk is in primary industry. That is important to have but it is not creating high-value jobs. The question is, how do we bring Maori into the tech industry, which does create those  high-value jobs."

The iwi leadership group had met  government department heads to explain other initiatives in which it was investing. The important part was the iwi was not asking for money; it was showing people what it was doing and asking them to go along, if they thought it was worthwhile, Mr Taylor said.

In 2019, it would be 250 years since Captain James Cook circumnavigated New Zealand and Mr Taylor was hopeful the iwi could lead the country in developing a long-term business plan in that year.

The iwi was not a short-term investor and the investment in ARL could show other iwi with Treaty of Waitangi settlements how to use their money to help their young people.

There had to be a time when iwi stopped asking for money and started doing things, he said.

Asked about the 60-40 split in the shareholding, Mr Taylor stressed he regarded it as an equal partnership. He was not interested in using his 60% stake to force through his own ideas.

Decisions would be made sitting at a table and talking about a shared vision. The talking would continue until all parties agreed on a plan.