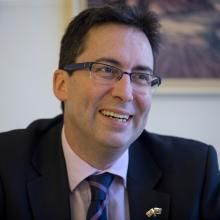 The next four or five years should be used by the two countries to strengthen their already close relationships, he said.

Mr Sinclair (47) visited Dunedin on Friday as part of his farewell process. He leaves for London on December 9 after spending three and a-half years in New Zealand as High Commissioner.

He told the Otago Daily Times a free-trade agreement would benefit both economies.

Of all the exports New Zealand sent to the EU, 35% of them went to the UK, rising to 44% when services were taken into account.

Services included education, tourism, law, accounting, financial services and technology, all of which were experiencing strong growth in both countries.

``This is classic two-way trade between these long-time allies. I hope we can do something ambitious with trade, but there is already a good platform.''

The time leading up to negotiating the FTA, which would happen only after Britain left the EU, should be spent building relationships, Mr Sinclair said.

Agriculture was a key component of any trade agreement and there was interest in the UK on how New Zealand achieved its own trading identity and its success in exporting primary products.

``When we leave the EU, we won't be covered by the EU common policy. We need our own settings. This is an opportunity for New Zealand to partner with the UK.''

New Zealand and the UK had the benefits of seasonality and time differences, he said.

Asked if he had achieved the goals he outlined to the ODT when he first arrived in New Zealand, Mr Sinclair said during his time in the country, there had been major changes.

The UK had voted for Brexit, resetting the country's policy settings in so many ways.

However, in his time here, he felt he had achieved most of his goals. Mr Sinclair had focused on getting relationships between the two countries in the ``best possible shape'' and promoting opportunities for New Zealand post-Brexit.

When British Foreign Secretary Boris Johnson was here in July, there was an emphasis on establishing dialogue between people and a redoubling of efforts to strength the bonds between the two countries.

That included Mr Johnson attending the unveiling of a war memorial at the Pukeahu National War Memorial Park.

During his last two months in New Zealand, Mr Sinclair was travelling the country continuing to talk to businesses, universities and research institutes about investment opportunities in the UK and New Zealand.

The relationship between the two countries was now ``very adult''. Mr Sinclair had been told by people dealing with New Zealand and UK relationships 30 and 40 years ago it had been a ``very mother-child'' relationship.

There was no risk of either country taking the other for granted. The relationship was healthy.

He and his family had enjoyed their time in New Zealand but he was planning to stay in the UK for the next nine years so his children could attend school.

``I've loved this job and being in New Zealand. I love this country.''

Touring the country to see people he had been dealing with was rewarding but it was also bittersweet because it was a time to say goodbye.

The next four to five years would be an exciting time for his successor Laura Clarke, who was married to a Kiwi, Mr Sinclair said.

Jacinda Ardern has said she is opposed to Brexit. She is an agnostic, globalist liberal whereas Brexit has a strong influence from Anglo -Christian conservatives. NZ First have put a condition for closer ties with the Commonwealth so they may have won that battle. NZ First policies seem to be more aligned to Commonwealth and Monarchy etc.

New Zealand has done the Asian trading thing....Time to get back with Britain with trade also. We are apart of Britain .as that's where the settlers come from.