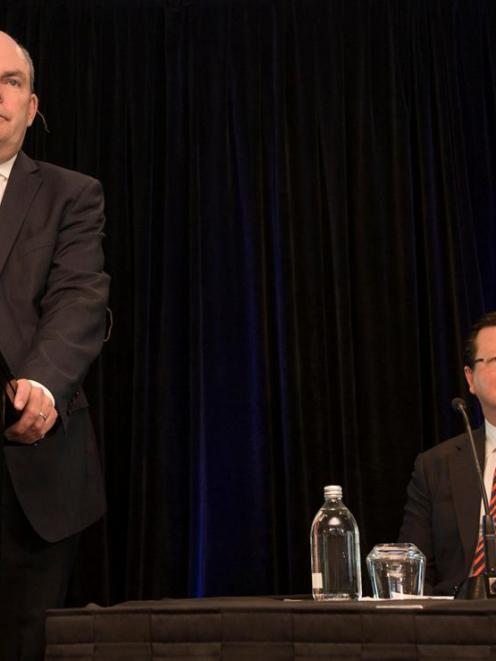 Minister Steven Joyce and CEO of Skycity Nigel Morrison talk to media about the SkyCity convention centre deal with the Government, with the listed casino operator paying $402m for the new centre. Photo by NZ Herald.
The Government is likely to move into urgency to pass legislation allowing SkyCity Entertainment to build a $402 million convention centre in Auckland in exchange for concessions to its gambling operations.

Construction of the New Zealand International Convention Centre would start in 2014 with the facility expected to be open in 2017.

In a political twist, the agreement allows for SkyCity to be compensated if the Crown acts in a way to change the concessions listed in the agreement. Urgency will ensure the Government has enough votes to pass the legislation, by requiring its coalition partners to vote with the Government on the issue.

Mr Morrison said the convention centre would allow the company to provide the facilities and services customers expected.

SkyCity's share price rose 10c on the news, taking it back to the highs of last week. Craigs Investment Partners broker Chris Timms said the deal was well telegraphed and nothing new was announced by Mr Joyce yesterday.

Auckland International Airport's shares also rose in value on the expectation that the new facility would attract about 33,000 more conference delegates each year.

Mr Joyce said benefits from the construction of the convention centre included a projected $90 million injection into the economy, an estimated 1000 jobs during construction and 800 jobs once it was up and running.

Legislation would be required for the final agreement to be put into effect.

The Government would have the right to approve the design of the convention centre.

''For years, the tourism industry and business sector have been asking for an international-sized convention centre to be built in New Zealand to ensure we compete with Australia and Asia by tapping into the growing market of high-value business visitors,'' he said.

SkyCity would invest $402 million, including $315 million for the construction and fitting-out and $87 million in the provision of land, to build the convention centre but it would take 35 years for the company to receive all the benefits of the regulatory concessions granted in return.

Much of the land is owned by state-owned Television New Zealand, which said it had not yet been approached about the deal and would consider any offer on its merits.

Mr Joyce said given the size of the investment, SkyCity needed some certainty about what would happen if any of those concessions were changed.

''For that reason, the agreement says that if the regulatory concessions are changed before the 35-year period is up, SkyCity will be compensated by the Government under the agreement.''

Any compensation would be equivalent to the concessions lost over the time for which they were not available to the company, he said.

• Allowing a further 12 gaming tables, with SkyCity able to swap each table for an automatic table game that seats up to 20 players.

• Allowing up to 17% of electronic gaming to accept banknotes greater than $20, but only in restricted areas.

• Allowing ticket-based and card-based cashless gambling across the Auckland casino.

• Introduction of a predictive modelling tool that analyses loyalty data to identify players at risk of problem gambling.

• Introduction of a voluntary pre-commitment system where players using ''pokies'' can elect to restrict the amount of time they play or the amount they spend over a selected period.

• Doubling the number of host responsibility executives that SkyCity employs.

• Introduction of player identification requirements when amounts above $500 are being put on to or cashed from ticket-in, ticket-out (tito) tickets in non-restricted areas.

SkyCity down on revenue, earnings expectations

SkyCity to embark on biggest spend