Health and safety rules require businesses that use personal protective equipment (PPE) — such as overalls and jackets — to replace it regularly, often still with good use left in items.

Instead of reusing it, businesses would normally send their PPE to the landfill because of the difficulty of removing the logos, Cargill Enterprises sales and business development manager Blair Kippenberger said. 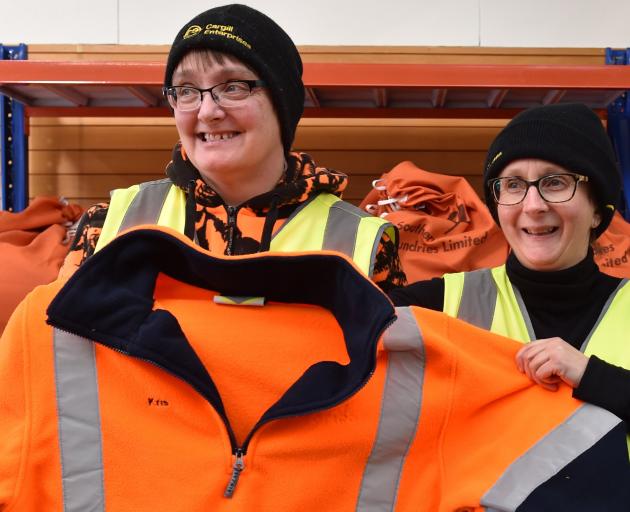 Cargill Enterprise’s Sharon Thorley (left) and Michella van Nugteren hold a reconditioned jacket ready to be reused. PHOTO: GREGOR RICHARDSON
After a discussion with Port Otago, Cargill Enterprises wanted to come up with a solution that meant PPE could be given a new lease of life.

The South Dunedin organisation employs more than 80 people with some level of disability, ranging from school leavers through to retirees.

The scheme was being trialled with about 100 of Port Otago’s old overalls and jackets, Mr Kippenberger said.

‘‘Businesses don’t want to give away PPE with brands on them in case it gets used in ways that could impact the business, so we thought we could help.’’

Unpicking a well-embroidered small logo took up to an hour.

‘‘When you get to that level of labour it doesn’t work well financially for anyone.

‘‘These uniforms are in great condition, so we put our heads together and started to look for different ways.’’

The solution was to sew a strip of reflective material over embroidered logos or use a heat transfer method to remove logos that had been screen-printed.

Once the organisation could come up with a process to streamline the recycling, it would look to work with other businesses, Mr Kippenberger said.

‘‘As long as we can find other organisations and businesses that want to work with us to find a solution and minimise the waste that goes to landfill, we will keep on going.

‘‘There is a wide range of businesses we could work with in Dunedin and we are really excited about it.’’

The PPE Cargill Enterprises was working with would be reused by its employees but, if the scheme was successful, it would likely go to not-for-profit organisations and charity shops, Mr Kippenberger said.