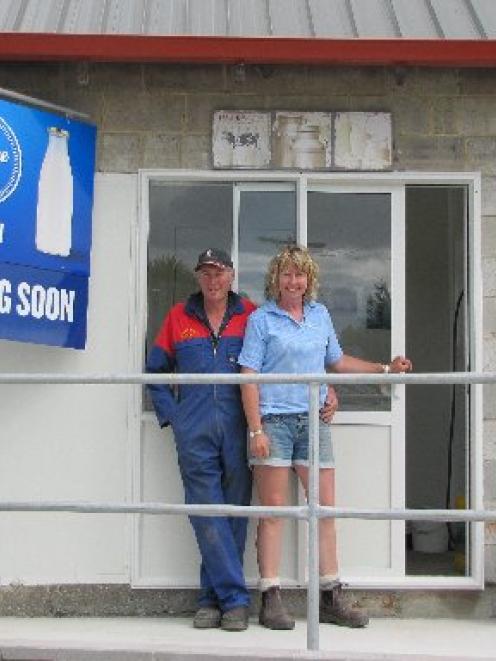 Timaru dairy farmers Stu and Andrea Weir are looking forward to opening a Village Milk outlet on their farm later this month. Photo supplied.
When Village Milk chief executive Mark Houston moved from South Canterbury to Golden Bay in 2010, he was looking for a lifestyle change.

After more than 30 years as a dairy farmer, milking cows was not initially on his agenda. Dairy farming was in the Houston family's blood. They started supplying milk back about 1890.

Mark and Phillippa Houston initially farmed near Rotorua, before converting a 200ha cropping property at Temuka to milk up to 800 cows, supplying Fonterra.

When they moved to Motupipi, Mr Houston thought he would run some beef cattle and do some fishing.

But then he got thinking about a disused cowshed on the property, which had not been used for about 25 years.

''It was feeling a bit lonely to be honest,'' he joked.

They started milking one cow for their own use, and for family and friends, and decided it was the ''real thing''.

Mr Houston did a lot of research on raw milk and travelled to Italy to look at milk dispensers which were fairly common there.

He decided to go down the path of a more ''pure version'' of dairy farming, using

cows that had been DNA tested for A2.

The Houstons got a licence to import the automatic milk dispensers and Village Milk was born.

Rather than ''going hell for leather'' and trying to sell machines around the country, they thought they should set a high standard themselves.

The pilot scheme at their Golden Bay farm began at the end of 2011 and it led to inquiries from farmers and consumers throughout the country.

There were now Village Milk farms also at Moutere, Greymouth, Oxford, and Gordonton (near Hamilton), with the latest farm opening in Timaru on February 24.

For Mr Houston, who is the company's chief executive, joined by son Richard as managing director, the journey was all about milk quality.

''There is a risk with raw milk. It's not plain sailing. Every drop of milk isn't suitable.

''It's got to be done properly and conscientiously to make sure the public are safe.

''It's all to do with attitude ... being aware that little girl there that is going to drink the milk. It's your responsibility she doesn't get sick,'' he said.

There were ''huge upsides'' to raw milk, which he believed was significantly better than processed milk.

''Once you've done the substantial amount of research on raw milk ... you realise, in time, it'll have a huge effect on the health spend. It's like a superfood really,'' he said.

Raw milk had a ''bad rap'' for a long time and it was about educating the general public.

Demand for better food was increasing and he encouraged consumers to consider raw milk.

''It's the real thing. It's what our ancestors have been drinking for 9000 years. We've only really had this other version in the last 50 to 100 years.

''The biggest thing I get a buzz from is when people say, `Wow, this is cool, this is the best thing ever and the taste is amazing,' and you say, `That's what milk is supposed to taste like','' he said.

If anybody was keen to open a Village Milk operation on their farm, and they had the right skill-set, the Houstons' would have a ''good chat'' to them, Mr Houston said.

Being a direct retailer to the consumer - ''there's no middle man'' - was a good business plan, as it was vertically integrated, he said.

Timaru dairy farmers Stu and Andrea Weir had long been interested in the concept of raw milk and were quick to initiate discussions regarding opening a Village Milk operation.

Their farm had been bought by his grandfather in the early 1950s.

Their location on Fairview Rd, on the southern boundary of the city, was a key reason for the decision, and they often had people calling in wanting to buy milk direct from the farm, Mr Weir said.

It also added value to the product, which was unaffected by world product prices. They would continue to milk cows for Fonterra as well as 20-odd cows for Village Milk.

The Village Milk cows would be kept separate and milked at the end of the main milking.

There was a lot of interest in the initiative with phone calls every day from people wanting to know when it was starting.

He agreed there was increased interest from consumers in what they were consuming.

A few years ago, it was probably ''more the green element'' and cheese makers who wanted raw milk, but now that demand had spread to families.

Mr Weir believed there was huge potential for the venture.

''I reckon there'll be one outside every town in New Zealand before long,'' he said.