On the waterfront: 'Esprit Lotus' here soon to load woodchips 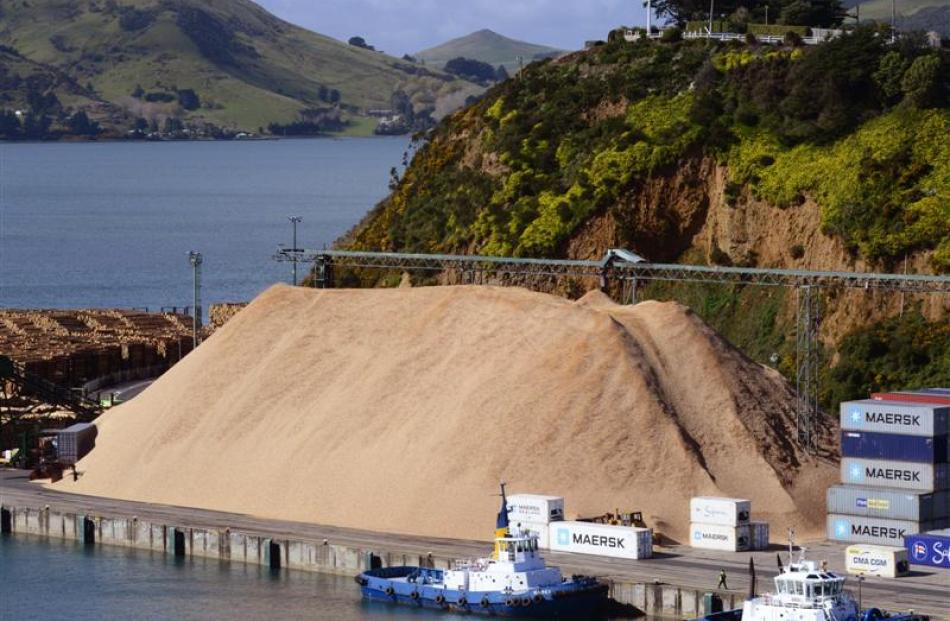 The stockpile of woodchips at Beach St berth is about to be reduced. Photo by Peter McIntosh.

Following the departure of Forest Creator on April 23, the stockpile of woodchips has steadily grown to its present proportions to dominate the storage area at the Beach St berth. Now, after the best part of seven months, Esprit Lotus is due here on November 17.

The ship will part-load at Bluff before calling here to top-off. This first-time Panama-flagged visitor is owned by Primavera Maritime S.A., of Imabari, and is managed by the Nisuga Kisen Company, of Tokyo. The ship was launched by the Oshima Shipbuilding Company on December 19, 2006, and delivered on April 19, 2007.

Next to the 47,928gt Albany Pioneer that berthed here on November 27, 2008, the 43,621gt Esprit Lotus will be the second-largest vessel of this type to call here. The 210m-long vessel has a deadweight capacity of 54,347 tonnes. It will load the 126th consignment of woodchips in a trade inaugurated with Japan, when NYKs Hiro Maru departed on April 22, 1977.

There is plenty of activity in the export log trade at the moment. After loading at Dunedin, Pacific Basin's Port Kenny departed for Bluff last Friday morning, but is due back today to complete loading at Port Chalmers. And a newcomer to this trade, St George, also berthed there on Friday.

This week, another two newcomers will be calling for logs. Nord Hong Kong is due at Dunedin tomorrow, and Asian Wind at Port Chalmers on Friday. These vessels are interesting in that they were built by Chinese yards that completed their first vessels within two months of each other in 2008.

Asian Wind is a product of the Nantong Nikka Shipbuilding Company yard at Nantong. Its first vessel, Western Wave, now trading as Franziska Bolten, was laid down on July 4, 2007, launched on December 27, and was handed over on April 21, 2008.

Coming direct from Huang-dao, Nord Hong Kong is 20.969gt, 32,289dwt, registered at Singapore and owned within Denmark's Norden group by Norden Shipping Singapore Pte. Built last year, it was laid down on March 8, launched on July 15, and completed on October 14.

The vessel was built by the Jiangmen Nanyang shipyard at Guangdong. To recap, this yard is located on the site of a shrimp and fish farm known as the Silver Lake area. Operations at this yard did not start until June, 2006.

And even when it was still in the planning stages, Pacific Basin Shipping ordered eight vessels from it on December 8, 2005. These owners then acknowledged the district by naming the first of these ships Silver Lake. It was launched on January 28, 2008, and delivered the following June. Silver Lake has now made four visits here since November 17, 2008.

With St George here last week and Nord Hong Kong due, nine ships built at this yard will have visited this harbour. It has proved to be a popular design with 35 already in service and a further eight under construction for delivery by 2014.

As a follow-up to the first visit by Holland America Lines Oosterdam last Monday, it was reported later that day that the Carnival group has ordered two more cruise ships from Fincantieri for delivery in 2015-16.

They will be the first of new designs and cost an estimated $US1.3 billion ($NZ1.6 billion).