Watt family all pulling together 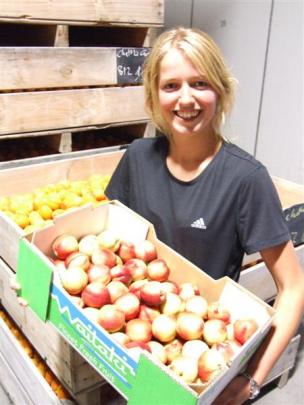 Geraldine Watt shows off a box of nectarines ready for sale. Photos by ODT. 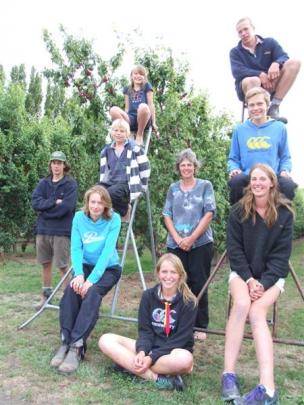 At Waitaki Orchard, near Kurow, there are many hands, although the workload is not always light, particularly over the busy harvest season.

But the remarkable Watt family, who own and run the summerfruit operation, take it all in their stride.

Justin and Julie Watt, along with their eight children, aged between 9 and 20, do not consider themselves anything out of the ordinary.

But their story is anything but ordinary as the close-knit family work together and the children step up to take on more responsibility, due to their parents' serious health issues.

Mr Watt, who had a heart bypass, ended up with a brain injury, and was now unable to work much more than two hours a day, while Mrs Watt was diagnosed with multiple sclerosis six years ago.

Yet the family maintained a positive attitude, as they faced the implications of ill health, along with the day-to-day challenges of running a business which was so dependent on climatic conditions.

''We all keep smiling. What else can you do?'' Mrs Watt said.

Mr and Mrs Watt moved south to the Waitaki Valley 12 years ago with their six young children.

Two more had been born since the move.

It was, as Mrs Watt described, a ''mid-life crisis'' for her husband, then working as an accountant in Auckland.

''He'd always said he wanted to be out of the office by the time he turned 40. The day before he turned 40, he left work and drove down here,'' she said.

He had been commuting 50km each day to work in an office in Nelson St, in the city's CBD, opposite the Sky Tower.

''He just got sick of it, really, and wanted a change. This came up and we thought we'd give it a go,'' Mrs Watt recalled.

The couple had no experience as orchardists when they purchased the property, just east of Kurow. It is now one of the few fruit-growing enterprises in North Otago.

English-born, Mrs Watt moved to New Zealand when she was 6.

She had worked in a laboratory, testing blood, for years.

The couple were married for 10 years before having children, then eight arrived in the next decade.

When eldest daughter Irene started school, she hated it and Mrs Watt made the decision to home-school her and the other children.

It was a big commitment but she enjoyed it - ''most of the time'' - and it also meant she was spending time with them.

Mrs Watt, whose illness meant she tired easily, said they tried to sell the orchard several years ago.

When that was unsuccessful, they decided to carry on. It had not been easy but the family effort had kept it going.

''It's been incredible we've been able to keep the business going through the sickness, somehow. These guys have helped a lot,'' she said, indicating the children.

''Each year they take on more and more. Hopefully, they'll take on the whole lot in a few more years, if they want to,'' she said.

The property boasted about 32,000 trees, including plums, apricots, nectarines, peaches and a few cherry trees.

The children undertook various tasks under the watchful eye of their father, who was ''always in the background''.

Irene (20) ran all the pruning of the trees in the winter - ''and bosses us all around'', a younger sibling added.

Ellen (19) took over the spraying this season, helped out with audits and had started organising staff training.

Geraldine (18) did a lot of the administration work, including PAYE, and was running the pickers at the moment.

There were about 45 staff at present.

She was also the best fruit picker in the family, with the ability to fill six bins a day, or the equivalent of 1.5 tonnes.

It was acknowledged that good pickers did about a tonne a day.

The title of orchard handyman went to Alistair (16), who did a lot of the welding and maintenance work.

When something broke down, he was the first port of call.

Fergus (15), who has his forklift licence, brought in fruit and had also done a lot of building work.

Duncan (13) mowed the orchard, which took about three days,

while Brian (11) helped with mowing and helped service the hydra ladders.

The three oldest girls flatted together on the property and youngest sister Heather (9) was contracted to do their dishes and some cleaning, following a formal interview.

Now Heather was at school, along with Duncan and Fergus, they might have to get their dishwasher fixed, the trio laughed.

Harvest was from the end of December until the end of March, and the peak began about January 10.

A packhouse manager was employed through the summer.

Their main aim was to produce as much fruit for export as possible, but that all depended on the season.

Their export fruit was destined for Australia or Europe.

Otherwise, their fruit was sold at supermarkets throughout New Zealand, at a few farmers markets and at their roadside shop.

This season had proved good so far, with the least rain that they could recall.

Irene and Ellen both had heavy traffic licences, as their father could not always drive, and Irene took fruit to sell at the Timaru farmers market on Sundays.

The girls also bought a real fruit ice-cream trailer which they took to markets and had at the shop.

The aim of that was to make some ''immediate cash'' to help with their next business venture.

The three oldest girls were installing a commercial kitchen at the orchard and launching a fruit processing business, to help make use of the approximate 100 tonnes of waste fruit that was fed to cattle each year.

They planned to make crumbles and pies and also freeze fruit, with enough storage space for about 120 tonnes.

The boys had done a lot of the building work, including building sheds and cool stores.

The siblings were proficient at mixing cement and pouring concrete and, on Christmas Eve - Mrs Watt's birthday - in 2013, they poured the floor of a coolstore, finishing at 2am on Christmas Day.

In April the orchard shut down for a month and, this year, Ellen was heading to England for about two and a-half months, to attend Bible College and visit her mother's family in Dover.

When it came to future plans, Fergus was keen to establish a fruit cider factory, while Irene wanted to set up accommodation for workers, now housed at local backpackers and camping grounds.

The house in which Mr and Mrs Watt, and some of the children live, came down from Christchurch following the earthquakes and the children helped renovate it as a ''side project''.

The house in which the three girls lived had also been renovated and Alistair plumbed the bathroom for them.

Mrs Watt believed the children's work ethic had been instilled in them by their father.

Despite working in close proximity to each other, the children reckoned they all got on fairly well.

''The only thing we ever fight over is food. Or who ate the last piece of cake,'' Irene joked.

Asked if she ever considered her family to be a little different from most families, Mrs Watt said, with a smile: ''This is normal. Doesn't everyone else do it?''

He was very impressed with how they worked together as a team and said it was nice to see young people involved in the industry.