By Sally Rae
0 Comments
From its very beginnings a century ago, the Longhouse at Karitane has had a history of wellness.

Built in the 1920s as a coastal retreat for shell-shocked soldiers returning from World War 1, it later became the first Karitane Nursing Home, under the supervision of Sir Frederic Truby King.

Now its latest custodian is continuing the wellness theme, as she opens what she describes as a "barefoot lux" accommodation, venue and retreat, following an extensive refurbishment project.

The Longhouse is a prominent building on an elevated site overlooking Karitane beach and the Otago coastline. As soon as South African-born Ilse Erasmus walked into it, she knew it was her next project.

Tackling new projects is nothing new for Ms Erasmus and her husband Craig, who were originally chartered accountants and worked in London. 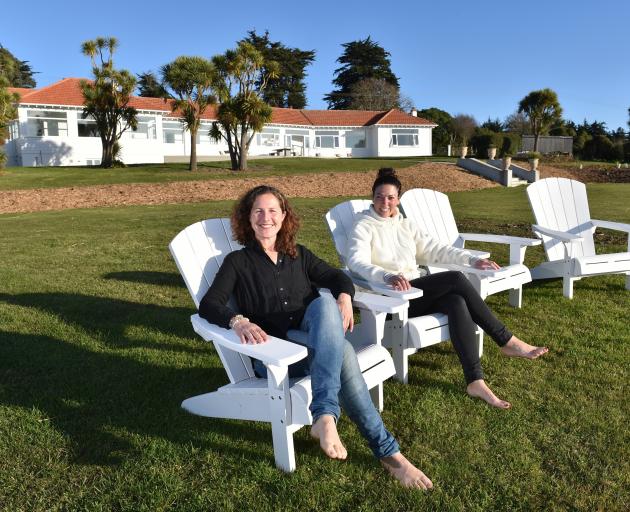 The Longhouse owner Ilse Erasmus (left) and team member Mariebelle Winters relax in front of the historic property. PHOTOS: GREGOR RICHARDSON
They shared a passion for wine and later completed post-graduate diplomas in viticulture and oenology at Lincoln University, which led to the start of second careers.

They spent time in Marlborough, where Mr Erasmus worked in various roles in the wine industry and his wife worked as an assistant winemaker. They owned a family vineyard for several years.

Eventually, the allure of Queenstown drew the family south and Mr Erasmus now works as chief executive of Amisfield.

It was her own health scare that led Ms Erasmus to realise that without health, "we don’t have anything". When she got better, she "pivoted" and studied integrative health coaching.

Another passion was interiors and renovation which led to her desire to find an "amazing" place that could be used as a retreat. 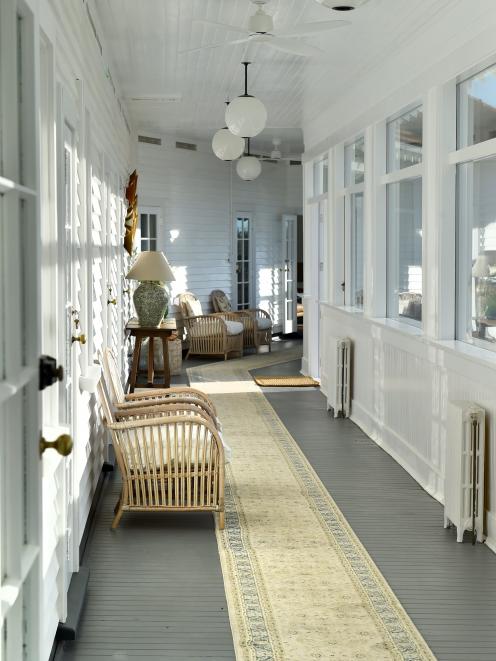 A covered veranda is a feature of the property.
After being unwell, Ms Erasmus also realised the "power of the sea" as a healing modality and decided she needed to be near the sea.

The couple bought the Longhouse in August last year and embarked on a "massive" project. Initially, the plan was to do it over several years, but when the difficulties in the building industry became clear, in the aftermath of Covid-19, they decided to get on with it while they had a good team.

The result is a relaxed coastal vibe in the light-filled space, of which the covered veranda is a feature.

There was a mix of modern design while period features were also maintained, as Ms Erasmus also wanted to ensure the "humility" of the building was retained.

For her inspiration was to find somewhere that wellness would be a focus.

"Look at the view," she said, gesturing to the expansive sea view.

"It’s always had this history of wellness," she said, adding that was what she wanted to foster and continue.

At The Longhouse Tirimoana Whare Roa, she wanted to provide a place where people could "escape and reconnect with their inner consciousness", aided by the "pristine" environment on the doorstep.

She was also passionate about celebrating the coastal hamlet of Karitane with its history both Maori and Pakeha.

For it was not just about celebrating the Longhouse, but also Karitane, and the wider East Otago community.

An opening event was being held today and it was exciting to get to the point where the venue could finally be shared with others. A practitioner retreat was being held next month.

A telescope is on hand to explore the view

There were "endless" possibilities for it; whether it was used for a retreat space, or to celebrate a milestone birthday, a venue for an elopement or for a "big white wedding", she said.

Ms Erasmus was now looking forward to building a retreat programme. Bespoke customisation was available "rather than a recipe for your stay".

Located on the coastal road, minutes from State Highway 1 and a 35km drive north of Dunedin, its accessibility was also a key factor, she said.

Many people did not appreciate being in a car for hours so it was an easy and accessible escape, she said.

With pent-up demand for travel following the Covid-19 border closures, she hoped overseas travellers would also be looking for "something different".