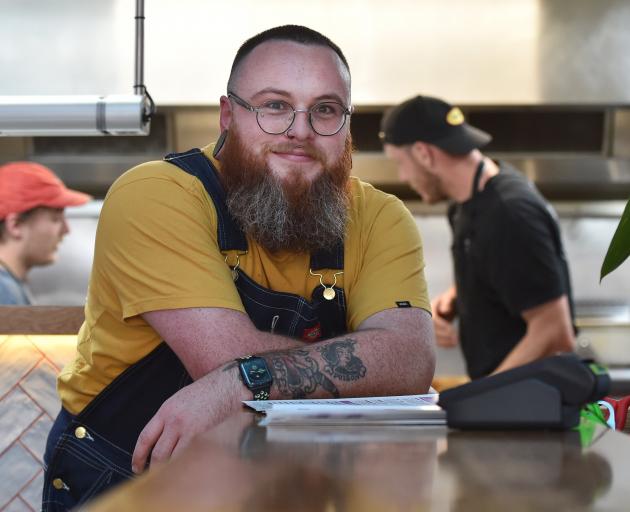 Ask Joseph Scanlon what comes first, the chicken or the egg, his response will be chicken, always. He and his partner have started a fried chicken restaurant in lower Stuart St. PHOTO: GREGOR RICHARDSON
"It's been a lot of hard yakka, that’s for sure."

A proud Joseph Scanlon, who has just opened Comes First Chicken Diner on Stuart St, was referring to the amount of effort that went into getting his new restaurant ready to open.

Mr Scanlon took over the premises where his new shop is situated on April 1 and had to get it ready before yesterday’s opening.

"Obviously some of it is still a bit sketchy," he laughed while pointing at his rapidly applied paintwork.

"My paint handiwork isn’t quite up to it so I’m not getting a job there anytime soon.

"We just wanted to get open and we didn’t want it to be perfect, anyway," he said.

Mr Scanlon, and his partner, Jamie-Lee Coffey, who both have a background in hospitality, moved to Dunedin a couple of years ago with the plan to enable starting up their dream business.

About eight months ago, he sat at a bar nearby with a mate and decided that he wanted to start that dream at the site his diner is in now.

"I had a yarn with the guys who owned it beforehand and they wanted to get out so it just worked out for us," he said.

The business has started with eight staff and Mr Scanlon wants to make sure the business had a family feel and team environment about it.

"We want to keep it small and have that tight-knit team feel," he said

To aid that, business will be closed two days a week so everyone gets the same amount of time off at the same time.

Covid-19 has been tough on the on the hospitality sector, particularly as Covid-19 alert levels changed how restaurants operated.

Mr Scanlon acknowledged the risk that was involved with hospitality and Covid.

"Yeah, yeah for sure the idea of going to Alert Level 4 makes us want to ... go and cry in a corner but if it does happen we will have to cross that bridge when we come to it.

"There is no point in stressing about it too much.

"If we went to [Alert] Level 3, we feel reasonably confident our business would be able to keep operating through the takeaway market," he said.

While it was still early days for Mr Scanlon’s business, he was not ruling out expanding it when the time was right.

Yesterday, Comes First Chicken Diner sold out of chicken wings, with more than 30kg flying out the door during the lunchtime period.