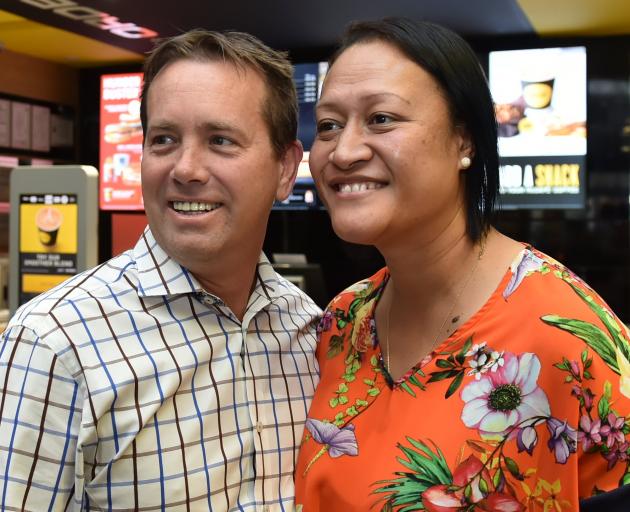 In fact, the Dunedin-based McDonald's franchise owners describe it as "just off the charts".

In August, the couple moved into the Southland market, buying the franchises for two restaurants in Invercargill and one in Gore.

That brought their total number up to six, with their three restaurants in Dunedin, and they were probably the largest franchisees in terms of sales, although not in the number of restaurants, Mr Stonelake said.

The couple were named McDonald's operator of the year for the third time, an honour only one other person has achieved - coincidentally Mr Stonelake's father Ray - and received a Ronald award for their work in the community

They also received a Golden Arch Award, a global honour that was the highest recognition for a McDonald's franchisee.

Only 37 were given out this year, from a stable of nearly 40,000 restaurants.

That was particularly special, as it was often seen as a lifetime achievement type of award, yet they were still relatively young and had achieved so much, Mr Stonelake said.

Then there were the big-name concerts, like Ed Sheeran, at Forsyth Barr Stadium, which saw the influx of people help them set record sales.

"What a way to end a year - a year that wasn't supposed to be busy," Mrs Stonelake said.

It was May, 2012 when Mr and Mrs Stonelake took over the George St and Great King St franchises, continuing a family involvement with the global restaurant chain.

Ray Stonelake was involved with bringing McDonald's to New Zealand in 1976. He trained in Chicago the previous year and was the first restaurant manager of the Porirua restaurant - the first McDonald's in the country.

Now with about 450 staff, "it's a lot of extra children", Mrs Stonelake, a mother-of-two, quipped.

The Stonelakes have become known for their philanthropic ways; last year, their company Stonelake Corp committed $350,000 over three years to top up a staff savings programme for home deposits or study.

So far, three staff have progressed through the programme.

One had bought a new home, one graduated this month with a degree in applied management, and another had been helped out with bathroom renovations.

Earlier this year, the couple - who live in Mosgiel - pledged $100,000 to the town's new aquatic centre.

They had taken senior management overseas for conferences and bought cars for them and gym memberships were available for all staff.

Each restaurant had a travel incentive.

They were also heavily involved with the Youth Employment Success (YES) initiative, which aimed to find employers offering opportunities to young people and telling their positive stories.

One thing that frustrated Mr Stonelake, as a business owner, was the perception about McDonald's.

You could have a career, be looked after and be successful, whether you were a crew member, manager or owner, he said.

Successes were shared and that was something that was important to the couple, Mrs Stonelake said.

"We are not in it doing it on our own, we're relying on our team.

"They are the ones that do the hard yards to make us look good.

"We want to share in that success, it's not just Justin and I.

"We love it, the feeling you get you can't put words to it - that high you just know you're making positive changes in people's lives.

"If you get that injection every time you do something good, you're almost encouraged to keep doing it," she said.

Asked what was the driver behind their social responsibility, Mr Stonelake said: "fundamentally, we just want to do good.

"But we also don't want to wait until it's too late.

Mrs Stonelake said the couple were in "such a privileged position" and she never wanted to take that for granted.

Her own parents worked three jobs and there were times when food on the table was scarce.

Now she was in a position that she could help support her "team".

"If everybody just does a little bit - we're not asking everyone to do what we're doing - but if businesses give back a little bit, it would make the world so much better."

When it came to the secret to managing their operation, with so many balls in the air, Mr Stonelake said planning was massive.

"We need to make sure we're really clear going into each year about what we want to achieve."

While they had enjoyed a lot of success, it was their vision that drove them.

"If you keep focusing on your vision, you can't got too far wrong," he said.

I'm still quite gutted that the George St McDonald's is no longer two storied. I have a lot of memories of that place, and with its current look/revamp it honestly seems so alien to me, like it's just some sort of upmarket chain cafe.

The magic of that place has gone, so i've only ever been there once and won't ever be going back, since the major draw cards are gone (memories and the fact it was two storied).
Not that i go to Mcd's that often anymore anyway, since it's expensive for what you get.

Even so, good on them for looking after their staff and giving back to the community.