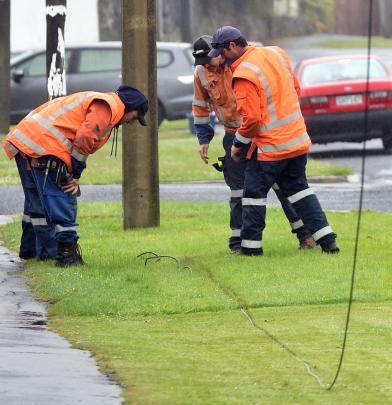 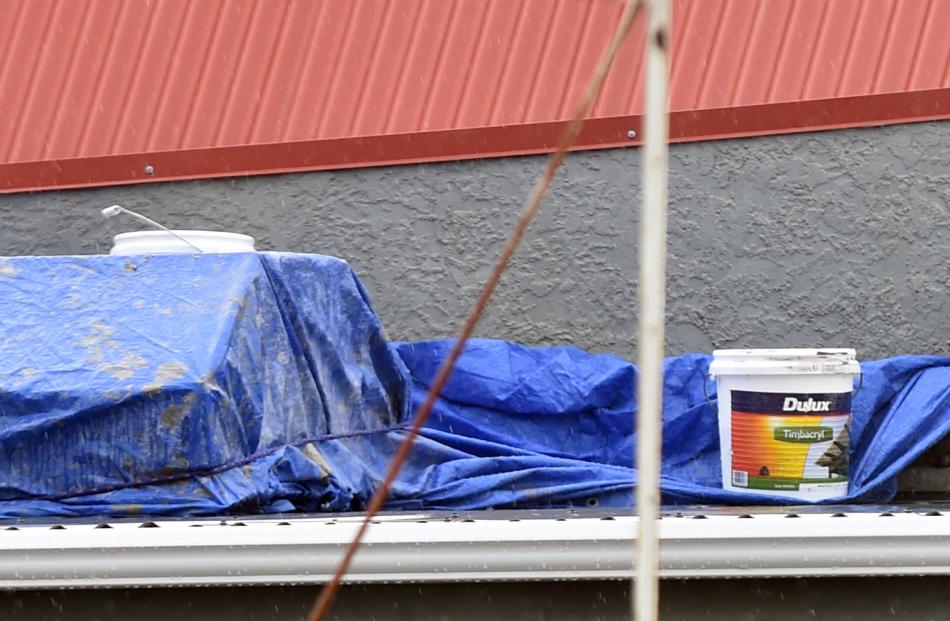 Paint cans are used to hold down a tarpaulin on top of a leaky Aurora Energy substation in Crawford St which failed on Tuesday. Photo: Peter McIntosh

On Tuesday, water leaked into a substation in Crawford St, causing a piece of equipment to burn out.

A generator had been brought in to supply power to surrounding customers and a tarpaulin placed over the substation appeared to be held down by paint cans when the Otago Daily Times visited yesterday.

Mr Healey said a transformer had also failed this week.

Mr Healey, who had inside knowledge about the causes of and responses to the equipment failures, said the incidents were part of a ''pattern of failure''.

They were yet more evidence Aurora Energy and Delta chief executive Grady Cameron's claims the network was safe were ''absolutely'' false.

Delta's claim to the ODT ''there was no danger to the public'' from the falling 6600V line was also clearly false as it scorched the earth when it hit the ground.

''If there had been someone nearby they would be dead.''

The line could have also struck a low-voltage line on the way down, sending up to 6600V into surrounding homes.

This could damage wires, causing fires or electrocuting anyone who happened to be touching a metal surface electrified by the current.

He had been told Delta carried out welfare checks on nearby customers to check if they had been harmed.

High-voltage lines coming down in relatively light winds should not happen on well-maintained networks, but had become all too common in Dunedin and Central Otago as a result of a decades of Delta neglect.

A spokesman for Delta, which is closely linked to Aurora and responsible for maintaining its network, said power was cut to 430 customers for about three hours from 9am as a result of the downed line.

An extra 450 customers lost power for three minutes at 9.50am as workers carried out switching to isolate the area and safely carry out repairs.

The spokesman did not respond to numerous questions, including whether Delta stood by Mr Cameron's previous statements the network was safe, and whether a transformer had failed this week.

He also did not respond to Mr Healey's claim the extra 450 customers only lost power because a switch, which would have isolated the fault, was not working, and would not confirm whether the line fell as a result of an ageing strain insulator failing.

''We have maintenance programmes designed to stop preventable faults, but until we know more about the cause, we won't speculate,'' he said.

He did say the network performed well for its age and given the weather in Dunedin and Central Otago.

''The reality is that despite the best efforts of our people and systems, sometimes faults happen on any network.''

He also confirmed the Crawford St distribution substation failed on Tuesday as a result of water leaking through the roof.

This cut power to six customers in the area, which was restored the same day when a generator was brought in.

''The roof was recently replaced, so age is not a factor, and the leak is being fixed.''

One comment says it all: "the network performed well for its age".
Well when you cut maintenance and don't renew infrastructure as you should, then you end up with what we have. Something that just kind of mostly works. But not always.

And I'm really not sure about the photo. Does it really show 3 workers on wet grass peering at the line wondering if it is still electrically alive?