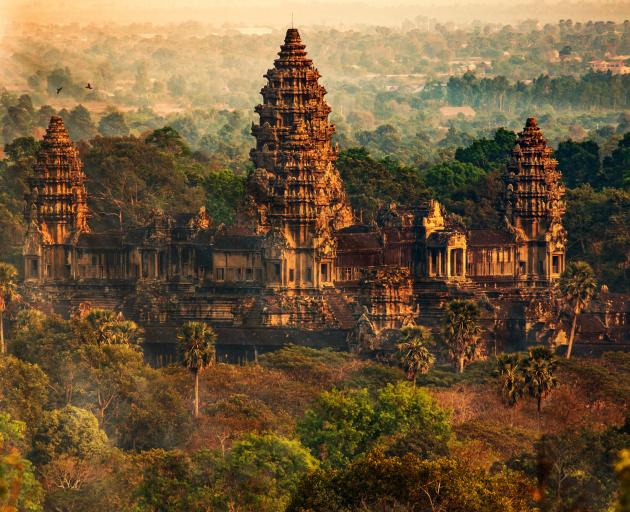 Between the 9th and 15th centuries, Angkor was the capital of the triumphalist Khmer empire.PHOTOS: GETTY IMAGES
A dawn jog around the magnificent temples of Angkor is the perfect way to meet an ancient country with deep roots, finds Martin Love.

Temple Run is a relentlessly addictive computer game. The concept is simple enough. You've stolen a cursed idol from an ancient crumbling temple and now you have to run for your life to escape the evil monkeys gnashing at your heels. The temple run I am doing is much slower, far less frantic and it only features a handful of snoozing macaques. But it is so infinitely more life-affirming.

The temples I'm jogging round are the colossal remains of the city of Angkor, often referred to as the eighth wonder of the world. Nothing quite prepares you for the mind-blowing magnitude and timeless beauty of it. Between the 9th and 15th centuries, Angkor was the capital of the triumphalist Khmer empire. At the peak of its power it was home to an estimated 1 million people. Rebellions, sackings, migration and crop failure finally forced its abandonment and, as the people moved out, the jungle quickly moved in.

Angkor was "rediscovered'' by French explorers in the 19th century and its temples slowly became one of the major draws of Asia. 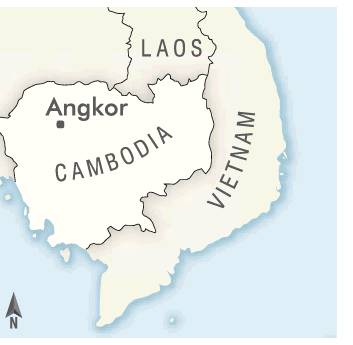 On this particular morning I have the place to myself. It's 5am and I'm about to run 25km along the forest tracks and narrow roads that link the temples. My route will roughly follow the historic Petit Circuit, a path that always used to be undertaken by elephant. Beginning at Angkor Wat, I'll take in the big-hitters of Angkor Thom, Ta Prohm, Bayon and Banteay Kdei, as well as some of the more minor but equally astonishing buildings of Baphoun, the Terrace of the Leper King and the Terrace of the Elephants, before returning to Angkor Wat. The run is not an official event, it's been laid on for me as a guest of the nearby Anantara hotel in Siem Reap. I am, in fact, the only entrant, though joining me for my solo adventure is Boray the tuktuk driver.

With Angkor Wat behind me, I start to trot into the dark. It's very warm and the only sound is the quiet puttering of Boray's support tuktuk. I don't think I have ever run anywhere so atmospheric. Boray points out the route and occasionally hands me a freezing cold face flannel. It's very hot and I'm wet with sweat. I have to keep stopping, not for breath but just to gawp in amazement.

After more than an hour, we stop for breakfast by a shimmering expanse of water known as Srah Srang. It was hacked out of the jungle more than 1000 years ago as a bathing lake for the god-king Rajendravarman II. We are joined by some monkeys and a decrepit little dog who is so delighted to be stroked that she giddily bounces along with me afterwards.

I run on and on, passing more and more temples, each a teetering stack of stones piled on each other like a huge game of Jenga. Finally, after almost three hours, I find myself back at the start at Angkor Wat. Boray grins and hands me an ice-cold drink. I tell him it's one of the best runs of my life. He nods happily and says he's never been for a run.

Later that day and all the next, my wife and I return to the temples. Watching the sun rise over Angkor Wat may well be on the bucket list of virtually every tourist in southeast Asia, but that doesn't make it any less skin-tinglingly spectacular. Our guide book told us to avoid dawn as that's when it was most crowded, but strangely we found the opposite. 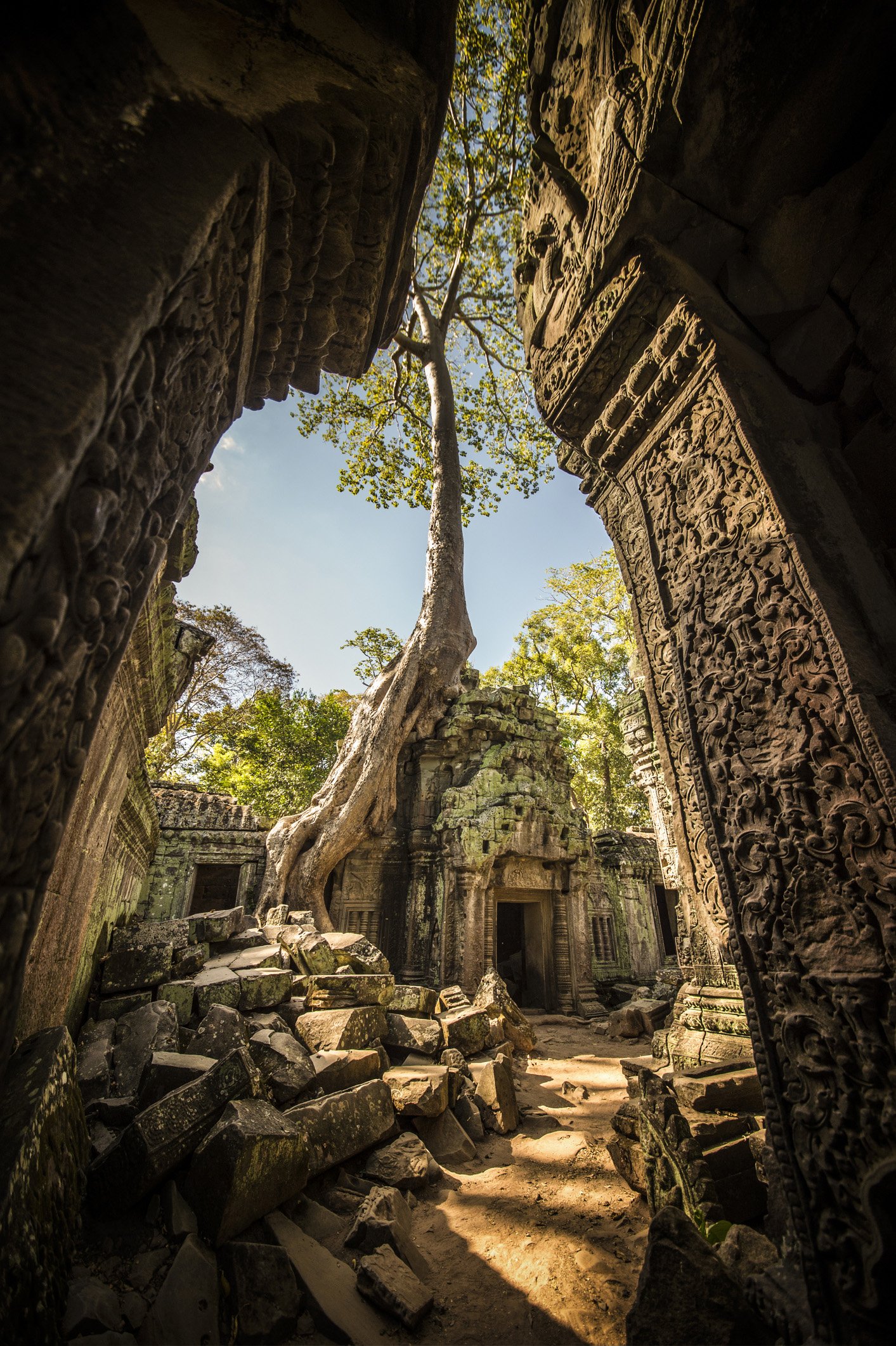 Only 28 temples can be visited, but it's estimated there are about 1000 strewn across the jungle. The city of Angkor would have been a medieval metropolis. Its scale is mind-boggling. It is thought Angkor Wat, one of the most famous religious buildings in the world, was heaved into existence by a labour force of 300,000 people and 6000 elephants.

But the Wat isn't even the largest construction, that honour goes to Angkor Thom. Set over 10sqkm, it's enclosed by an 8m-high wall that skirts a 100m-wide moat in a gargantuan 13km square. At its centre is the bizarre edifice of Bayon. It was the state temple of Jayavarman VII - known by all the guides as J7, which makes him sound like a boy band or an alcopop. Bayon has 54 crumbling towers embossed with 216 vast and enigmatically smiling faces. Then there is 1.2km of bas-reliefs incorporating more than 11,000 figures. With your eyes still bulging, you exit and stumble towards Ta Prohm. This is the temple, devoured by the jungle, that featured in Tomb Raider, starring Angelina Jolie.

Angkor is a wonder of the ancient world, but contemporary Cambodia has much more going for it than just these charismatic stones. After a few days in the town of Siem Reap, we catch the bus to Battambang, the country's third city. With its genteel colonial architecture (Cambodia was a French protectorate until 1953), it's a chaotic mixture of laid-back cafes, bustling markets, backpacker hostels and up-and-coming galleries. And it has a bat cave.

Just a few miles outside town is Phnom Sampeu, a scrappy rock face that's home to more than 1million wrinkle-lipped bats - one of the largest colonies in the world. Come dusk, they stream out of the fissures in the cliff and head to the fields to get to work eating insects. There are so many it takes more than half an hour for them all to fly past.

While they do the same run every night, they don't appear to lack enthusiasm. Remarkable perhaps, when you consider they have been doing it since long before Angkor was the centre of the world, teaming with a million busy inhabitants of its own.

Iten is known as the ‘‘Home of Champions’’, so prodigious is its output of Olympians. It’s also the site of this two-week running experience, where you will be trained in Kenyan techniques by professional coaches and shown the best trails by local guides. Located 2400m above sea level above the Great Rift Valley, it’s not only beautiful but ideal terrain for endurance training.

This  holiday package of guided, scenic off-road runs has its base in the  Victorian village of Ballater, to the east of the Cairngorm National Park.

Beginning in Courmayeur in the heart of the Italian Alps, this four-day trip will take long-distance runners off the beaten track into the Aosta Valley.

How did the Angkor temple survive the catastrophe of Pol Pot? Looks like Mowgli's Monkey Temple.