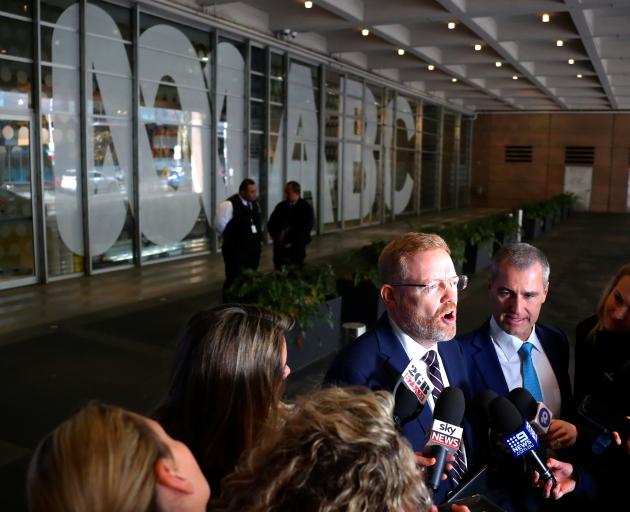 Editorial Director of the ABC Craig McMurtie speaks to members of the media after police raided their offices in Sydney. Photo: Reuters
The people of Australia and New Zealand have been in danger of overconfidence about our democracies.

Our rights and protections are fragile. The executive, the Government, the police and the security agencies have enormous potential power.

The public has an ambivalent, and sometimes even hostile, view of journalists and journalism. The news media can, indeed, be arbitrary, unfair, inaccurate and intrusive. But it continues to play a vital role in safeguarding our democracy, in holding power to account, in questioning authority and in throwing light on and into our public institutions.

It acts as a conduit for public information that, while often failing to come close to the ideal of objectivity, is far, far less biased than the public relations releases and pronouncements from the powers that be.

Dedicated journalists believe passionately in the underlying value of what they do and the essential place of independent news and diverse voices. They have learned to be sceptical of officialdom - although hopefully not too cynical - and have seen enough to know about power, personal interest, greed, and the ability of people to deceive both themselves and others.

The execution of search warrants in Australia is appalling, so much so that it has raised international media concerns.

It has also, thankfully, prompted strong united action by Australian media. Prime Minister Scott Morrison has changed his tune on the raids, and it appears the steady erosion of journalist rights will at least be reviewed.

The Australian Federal Police last week raided the home of a senior News Corporation journalist. It was to gather evidence on a story published 14 months before on proposals to expand surveillance powers, no doubt also to intimidate both officials and journalists.

Such plans are in the public interest and should be public. Australian security itself was not put at any risk through the leak and the story.

The next day, the police walked into the ABC with a warrant for anything from teams of journalists and senior editors that might relate to a 2017 report on Australian special forces being investigated for possible Afghanistan war crimes.

Again, this response was what we expect in dictatorships. But such actions are increasingly taking place in ``democracies''. The story was, again, clearly in the public interest. Journalists had brought to the people something that was important.

Authorities, of course, want to shut down what might be embarrassing. They do not want outside scrutiny. That will always be their default position. They also are, naturally, alarmed people in their organisations leaked information.

Australia, partly in response to terror threats and partly via the 1914 Crimes Act, has a body of law which gives the Government and its agencies extraordinary power. There are not the public interest protections present in New Zealand.

Disappointingly, outrage was at first largely limited to journalists and those particularly concerned with civil liberties. A similar response is likely in this country.

New Zealand has whistle-blower legislation (protected disclosure), but its effectiveness is questioned, and it does not include leaking to the media. Australia also has various laws of some but limited use.

A leading New Zealand media specialist, Gavin Ellis, has written that Australians deserve better laws and protections. ``And New Zealanders need reminding that our own imperfect protections are precious but fragile,'' he said.

Meanwhile, a common meme continues to circulate on the internet that succinctly underlines the importance of safeguards for the media - faults and all: ``First they came for journalists,'' it says. ``We don't know what happened after that.''

THE MEDIA ARE THE MESSAGE

Let us not forget that we have already seen this in New Zealand with the police raid on Nicky Hager. Nicky Hager's computer equipment was confiscated and subsequently returned in pieces as if deliberately smashed.

Not to mention the media concentration in New Zealand. Down to 3 big boys.

These would be tools of tyrants. Trembling, itching to be, if not already, invaded by totalitarians.