The only neurosurgeon working for the Southern District Health board area says patients are at risk because there aren't enough neurosurgeons and he's calling on the government to help.

Dr Ahmad Taha says the lack of qualified physicians available to support him means he has to be on call to perform lifesaving surgery anytime day or night.

"It's a big workload but there's no other choice. Either I will do my job or people will lose lives or they'll lose body functions," he said.

Dr Taha is originally from Syria and came to New Zealand almost ten years ago to fill in temporarily as a locum for Dunedin Hospital. But after being invited to stay longer, he moved his entire family over to settle here and they were all recently granted citizenship.

He calls New Zealand his home and said both he and his family were welcomed by Dunedin's community as soon as they arrived. But he said it's unacceptable that in a country as wealthy and educated as New Zealand, there's only one person in an entire region who can provide the critical treatment that he does. 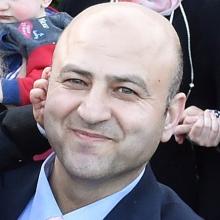 Ahmad Taha
If he isn't in town or on call, patients who urgently need treatment or an operation can be flown to Christchurch. But, he says, time is crucial when it comes to patients needing neurosurgery or treatment and the risk is that many patients do not survive the journey.

"If somebody has any urgent or emergency situations for e.g. a head injury with a clot, they have to be treated within four hours," said Dr Taha.

"Or if someone has a stroke or has fluid in the brain, if we don't act within four hours many of these patients would suffer."

He described the recent case of a patient who came in with a head injury.

"I wasn't on call and the weather was bad for any airplane to fly and they had to send a fixed wing airplane but they couldn't. So I was contacted, I had to come out at two o'clock in the morning to operate on that patient because even if I'm not on call, my conscious will not permit me just to stay at home sleeping whilst I know somebody needs me.

"And If I'm not in town then patients have to travel to Christchurch and definitely that is a risk.

He said the situation in New Zealand is a crisis and the country desperately needs more neurosurgeons.

"It is alarming, and I keep saying in many meetings that New Zealand has to be proactive, not reactive," said Dr Taha.

"In 10 years time with the 22 neurosurgeon we have, 30 to 40 percent of them might go to retire, or might just leave, and then you have no manpower to cover the loss.

"There haven't been any training Neurosurgeons from New Zealand for the last 10 years. No one in Australasia has trained to be neurosurgeon here.

"If they start training somebody now from New Zealand, it will take 10 to 15 years to produce a consultant level surgeon who would be able to carry on doing what I'm doing, or what other Neurosurgery consultants in New Zealand are doing and this is a big problem."

Now he's calling on the government to help.

"We need definite help. We need people to come here and work in Dunedin but it takes two years to employ somebody from overseas and retain them here with the current requirements on the Medical Council under immigration."

Dr Taha said New Zealand has difficulty employing and retaining surgeons from overseas and the country does not have the medical support it should have.

The DHB recently advertised for a locum to help but have so far been unsuccessful in filling the position.

"Comparing the lifestyle in Australia, for example, and the salaries - financially it is more lucrative to work in Australia. It is definitely difficult to be on my own. It is difficult to continue doing my job without having support. Christchurch are doing what they can, but it's not going to be enough or sufficient to prevent people from having serious problems here.

"If I go tomorrow, I don't think there will be any reasonable plan to cover the unit from Christchurch. It's a fact that everybody knows - time is crucial in Neurosurgery and with the weather in New Zealand, it can stop flights many times and this will affect patients' care," said Dr Taha.

"So God forbid if somebody is in Queenstown or in Invercargill, or they can't fly the helicopter, they have to drive eight hours on the road - if it is safe, for an operation which by the time they arrive, it might be too late to do anything."

While the job and its workload has been tough, Dr Taha said saving lives has been the most rewarding thing about his work.

"The best gift I had here was from a guy, a GP from Wellington, who gave me the New Zealand flag three years ago because I saved his son after he fell and had a head injury. You know, I felt at that time. I'm really part of this society. I'm really one of you. And people have said to me 'You are one of us.'"

He is calling on Neurosurgeons around the world to come to New Zealand to work here.

"This is the place where people need you, even for like five years or a few years of somebody's life. Come to save these people because they do deserve to have excellent service."

SDHB postpones some appointments ahead of nurses' strike

‘Real urgency’ in need to address IT security

Thank you, Dr Taha, for the great work you are doing for our community!

The NZ medical "establishment" need to stop protecting their own patch and make it easier for qualified specialists such as yourself to come to New Zealand, rather than putting up the administrative barriers that have existed for so long, denying qualifications gained overseas as being "not good enough". People die as a result!

Whilst neurosurgical staffing issues New Zealand are not straight forward and there are discussions at the highest level in the training programme on this topic, it must be pointed out that whilst staffing issues have been a major problem in Dunedin, Dr Taha is incorrect in saying that no New Zealanders have returned to their country to gain employment. Auckland and Christchurch have both employed surgeons from our own training scheme.

It is absolutely incorrect to say that Christchurch has not been supportive of the Neurosurgical Service in Dunedin. Firstly the Director of the South Island Service that includes Dunedin is from Christchurch and spends large amounts of his time dealing with day to day matters. Secondly, specialised treatment in paediatric, skull base and blood vessel surgery for the Dunedin and Southland population is provided by Christchurch without concern. As the Dunedin Unit has gone though its periods of variable dysfunction over the last ten years, Christchurch has been providing oversight and call cover for emergency cases. So we have certainly provided significant support for the whole of the South Island requirements including Dunedin and Southland

In regards to the risk to life in Dunedin in regards to Neurosurgical emergencies, it must be pointed out that it is a fact of life in New Zealand that peripheral centres need to transfer patients to tertiary care centres for super specialised services in larger centres. Whilst weather can play a role, this is not a reason to put up a service in every city or town. If this was the case, Invergargill, Central Otago, Timaru, Greymouth, Blenheim, Nelson, Taranaki, Hastings/Hawkes Bay, Roturua, etc, etc would be in line for a Neurosurgical Unit as well. This is both financially and professionally unsustainable. It must be pointed out that most of these regions are all covered by centralised services.

Our experience is that the risk to life and risk of disability specifically for patients in Dunedin is not so much associated with issues related to transfer times of patients to a larger, well functioning unit but rather to the persistent practice of employing surgeons that do not meet the high standards that New Zealanders demand and that they deserve. The regional population and Press should demand to be told the full story and request the facts from their administrators and surgeon