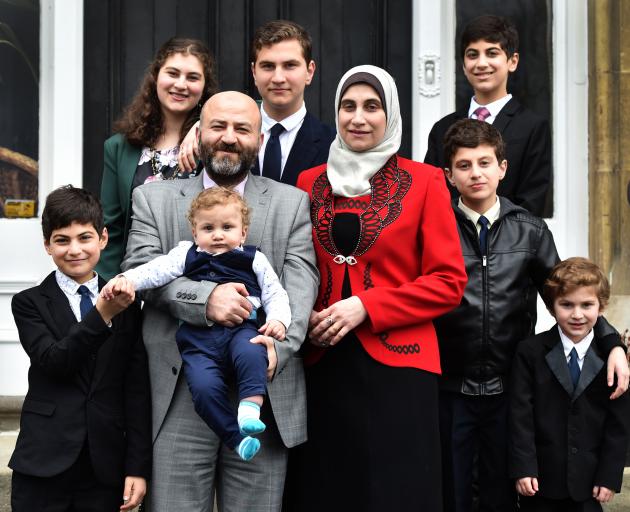 Brain surgeon Ahmad Taha and his wife Lobna Al Haj Chahin with their seven children. In his father's arms is Yusuf (10 months) and (from left) are Hamza (8), Hanin (17), Mohammad Hadi (16), Ali Zane Alabedeen (14), Mahmood (11) and Ibrahim (6). PHOTO: PETER MCINTOSH
For nearly a decade he has been performing brain surgery on hundreds of patients a year at Dunedin Hospital.

Now the city's only neurosurgeon, his wife and all seven of their children are officially New Zealanders.

Ahmad Taha, his wife Lobna and their children, who have dual Syrian and UK citizenship, attended a citizenship ceremony with Mayor Dave Cull last Wednesday.

Their two youngest children, 10-month-old Yusuf and 6-year-old Ibrahim, were born in the country and were already New Zealand citizens.

Mr Taha arrived in Dunedin in 2010, originally intending to stay for only three months as a locum.

However, after a year he was offered a permanent job and the family decided to stay, having fallen in love with the city.

"From day one I think when I came one of the managers of my sector told me `this is your home'. I felt welcome since the first days," he said.

"This feeling is shared by my family."

Especially following the Christchurch attacks there was a strong feeling of solidarity and support for New Zealand's Muslim community, he said.

Mr Taha, also a senior clinical lecturer at the University of Otago, has a weighty responsibility as the sole neurosurgeon at Dunedin Hospital.

About 250 patients had surgery at the hospital every year, which included elective surgery such as operations on benign tumours.

"I have never lost hope to find other neurosurgeons to keep Dunedin's neurosurgical unit working efficiently, and permanently," he said.

"And this is what makes me carry on. I have had so many cards and support via emails and verbally for what I am doing and I feel really humbled by some comments from my patients and from the public.

"We can do more to support this beautiful city. It deserves top service, equal to any other city in New Zealand."

While over the years he had received many messages of thanks from former patients and their relatives, the real prize was when he saw his patients smile again.

"You don't wait for any reward, except what they feel, and that you have done something to help society."

For the last 10 years, there had been no New Zealanders training for the profession, he said.

The lack of neurosurgeons needed attention "at the highest level".

Despite "exceptional" cover being available from Christchurch, he always felt an obligation to operate in an emergency even when he was not on call.

"[It] is not 100% safe to transfer people with acute neurosurgical problems as time is crucial for treatment."

The plan for the future was to have two full-time positions, which would be covered by three people, but the city had to have at least three full-time neurosurgeons, he said.